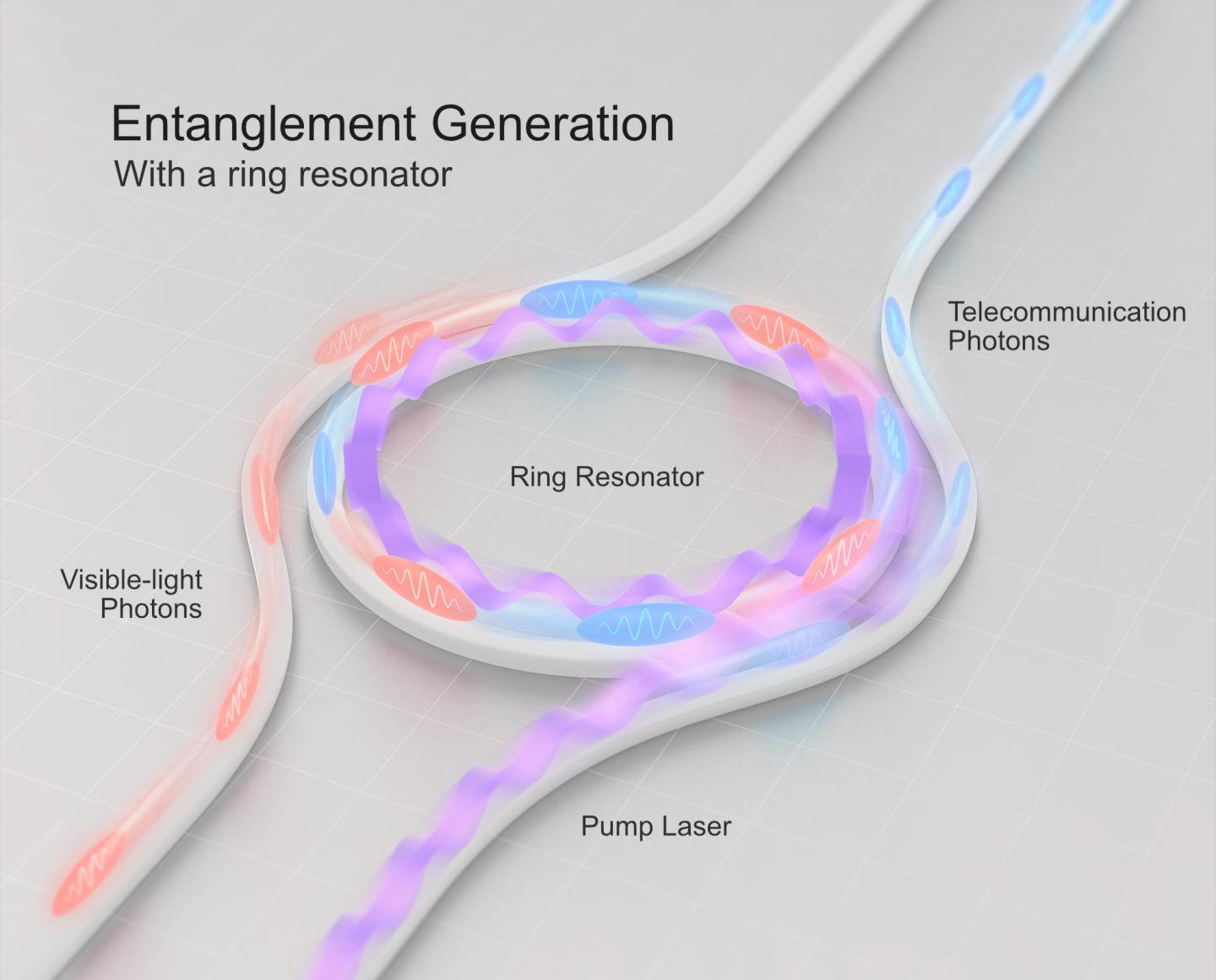 Some of the most advanced communication systems now under development rely on the properties of quantum science to store and transport information. However, researchers designing quantum communication systems that rely on light, rather than electric current, to transmit information face a quandary: The optical components that store and process quantum information typically require visible-light photons (particles of light) to operate. However, only near-infrared photons–with wavelengths about 10 times longer–can transport that information over kilometers of optical fibers.

Now, researchers at the National Institute of Standards and Technology (NIST) have developed a novel way to solve this problem. For the first time, the team created quantum-correlated pairs made up of one visible and one near-infrared photon using chip-based optical components that can be mass-produced. These photon pairs combine the best of both worlds: The visible-light partners can interact with trapped atoms, ions, or other systems that serve as quantum versions of computer memory while the near-infrared members of each couple are free to propagate over long distances through the optical fiber.

The achievement promises to boost the ability of light-based circuits to securely transmit information to faraway locations. NIST researchers Xiyuan Lu, Kartik Srinivasan and their colleagues at the University of Maryland NanoCenter in College Park, demonstrated the quantum correlation, known as entanglement, using a specific pair of visible-light and near-infrared photons. However, the researchers’ design methods can be easily applied to create many other visible-light/near-infrared pairs tailored to match specific systems of interest. Moreover, the miniature optical components that created the entanglements are manufactured in large numbers.

Lu, Srinivasan and their colleagues recently described their work in Nature Physics.

One of the more counterintuitive properties of quantum mechanics, quantum entanglement occurs when two or more photons or other particles are prepared in a way that makes them so intrinsically connected that they behave as one unit. A measurement that determines the quantum state of one of the entangled particles automatically determines the state of the other, even if the two particles lie on opposite sides of the universe. Entanglement lies at the heart of many quantum information schemes, including quantum computing and encryption.

In many situations, the two photons that are entangled have similar wavelengths, or colors. But the NIST researchers deliberately set out to create odd couples–entanglement between photons whose colors are very different.

“We wanted to link together visible-light photons, which are good for storing information in atomic systems, and telecommunication photons, which are in the near-infrared and good at traveling through optical fibers with low signal loss,” said Srinivasan.

To make photons suitable for interacting with most quantum information storage systems, the team also needed the light to be sharply peaked at a particular wavelength rather than having a broader, more diffuse distribution.

To create the entangled pairs, the team constructed a specially tailored optical “whispering gallery”–a nano-sized silicon nitride resonator that steers light around a tiny racetrack, similar to the way sound waves travel unimpeded around a curved wall such as the dome in St. Paul’s Cathedral in London. In such curved structures, known as acoustic whispering galleries, a person standing near one part of the wall easily hears a faint sound originating at any other part of the wall.

When a selected wavelength of laser light was directed into the resonator, entangled pairs of visible-light and near-infrared photons emerged. (The specific type of entanglement employed in the experiment, known as time-energy entanglement, links the energy of the photon pairs with the time at which they are generated.)

“We figured out how to engineer these whispering gallery resonators to produce large numbers of the pairs we wanted, with very little background noise and other extraneous light,” Lu said. The researchers confirmed that entanglement persisted even after the telecommunication photons traveled through several kilometers of optical fiber.

“Our contribution was to figure out how to make a quantum light source with the right properties that could enable such long-distance entanglement,” Srinivasan said.

How genetic background shapes individual differences within a species