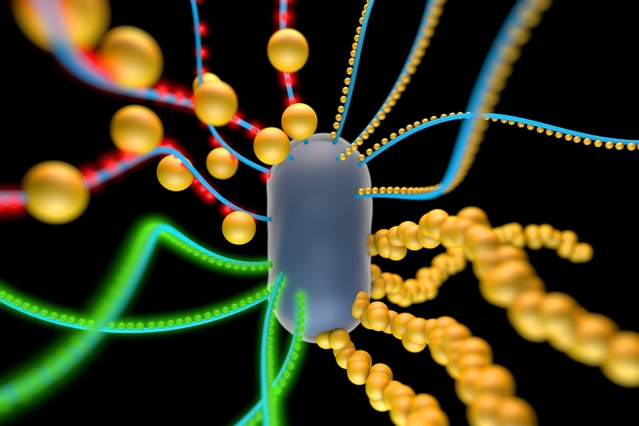 An artist's rendering of a bacterial cell engineered to produce amyloid nanofibers that incorporate particles such as quantum dots (red and green spheres) or gold nanoparticles.

Inspired by natural materials such as bone — a matrix of minerals and other substances, including living cells — MIT engineers have coaxed bacterial cells to produce biofilms that can incorporate nonliving materials, such as gold nanoparticles and quantum dots.

These “living materials” combine the advantages of live cells, which respond to their environment, produce complex biological molecules, and span multiple length scales, with the benefits of nonliving materials, which add functions such as conducting electricity or emitting light.

The new materials represent a simple demonstration of the power of this approach, which could one day be used to design more complex devices such as solar cells, self-healing materials, or diagnostic sensors, says Timothy Lu, an assistant professor of electrical engineering and biological engineering. Lu is the senior author of a paper describing the living functional materials in the March 23 issue of Nature Materials.

“Our idea is to put the living and the nonliving worlds together to make hybrid materials that have living cells in them and are functional,” Lu says. “It’s an interesting way of thinking about materials synthesis, which is very different from what people do now, which is usually a top-down approach.”

Lu and his colleagues chose to work with the bacterium E. coli because it naturally produces biofilms that contain so-called “curli fibers” — amyloid proteins that help E. coli attach to surfaces. Each curli fiber is made from a repeating chain of identical protein subunits called CsgA, which can be modified by adding protein fragments called peptides. These peptides can capture nonliving materials such as gold nanoparticles, incorporating them into the biofilms.

By programming cells to produce different types of curli fibers under certain conditions, the researchers were able to control the biofilms’ properties and create gold nanowires, conducting biofilms, and films studded with quantum dots, or tiny crystals that exhibit quantum mechanical properties. They also engineered the cells so they could communicate with each other and change the composition of the biofilm over time.

First, the MIT team disabled the bacterial cells’ natural ability to produce CsgA, then replaced it with an engineered genetic circuit that produces CsgA but only under certain conditions — specifically, when a molecule called AHL is present. This puts control of curli fiber production in the hands of the researchers, who can adjust the amount of AHL in the cells’ environment. When AHL is present, the cells secrete CsgA, which forms curli fibers that coalesce into a biofilm, coating the surface where the bacteria are growing.

The researchers then engineered E. coli cells to produce CsgA tagged with peptides composed of clusters of the amino acid histidine, but only when a molecule called aTc is present. The two types of engineered cells can be grown together in a colony, allowing researchers to control the material composition of the biofilm by varying the amounts of AHL and aTc in the environment. If both are present, the film will contain a mix of tagged and untagged fibers. If gold nanoparticles are added to the environment, the histidine tags will grab onto them, creating rows of gold nanowires, and a network that conducts electricity.

‘Cells that talk to each other’

The researchers also demonstrated that the cells can coordinate with each other to control the composition of the biofilm. They designed cells that produce untagged CsgA and also AHL, which then stimulates other cells to start producing histidine-tagged CsgA.

“It’s a really simple system but what happens over time is you get curli that’s increasingly labeled by gold particles. It shows that indeed you can make cells that talk to each other and they can change the composition of the material over time,” Lu says. “Ultimately, we hope to emulate how natural systems, like bone, form. No one tells bone what to do, but it generates a material in response to environmental signals.”

These hybrid materials could be worth exploring for use in energy applications such as batteries and solar cells, Lu says. The researchers are also interested in coating the biofilms with enzymes that catalyze the breakdown of cellulose, which could be useful for converting agricultural waste to biofuels. Other potential applications include diagnostic devices and scaffolds for tissue engineering.

“I think this is really fantastic work that represents a great integration of synthetic biology and materials engineering,” says Lingchong You, an associate professor of biomedical engineering at Duke University who was not part of the research team.