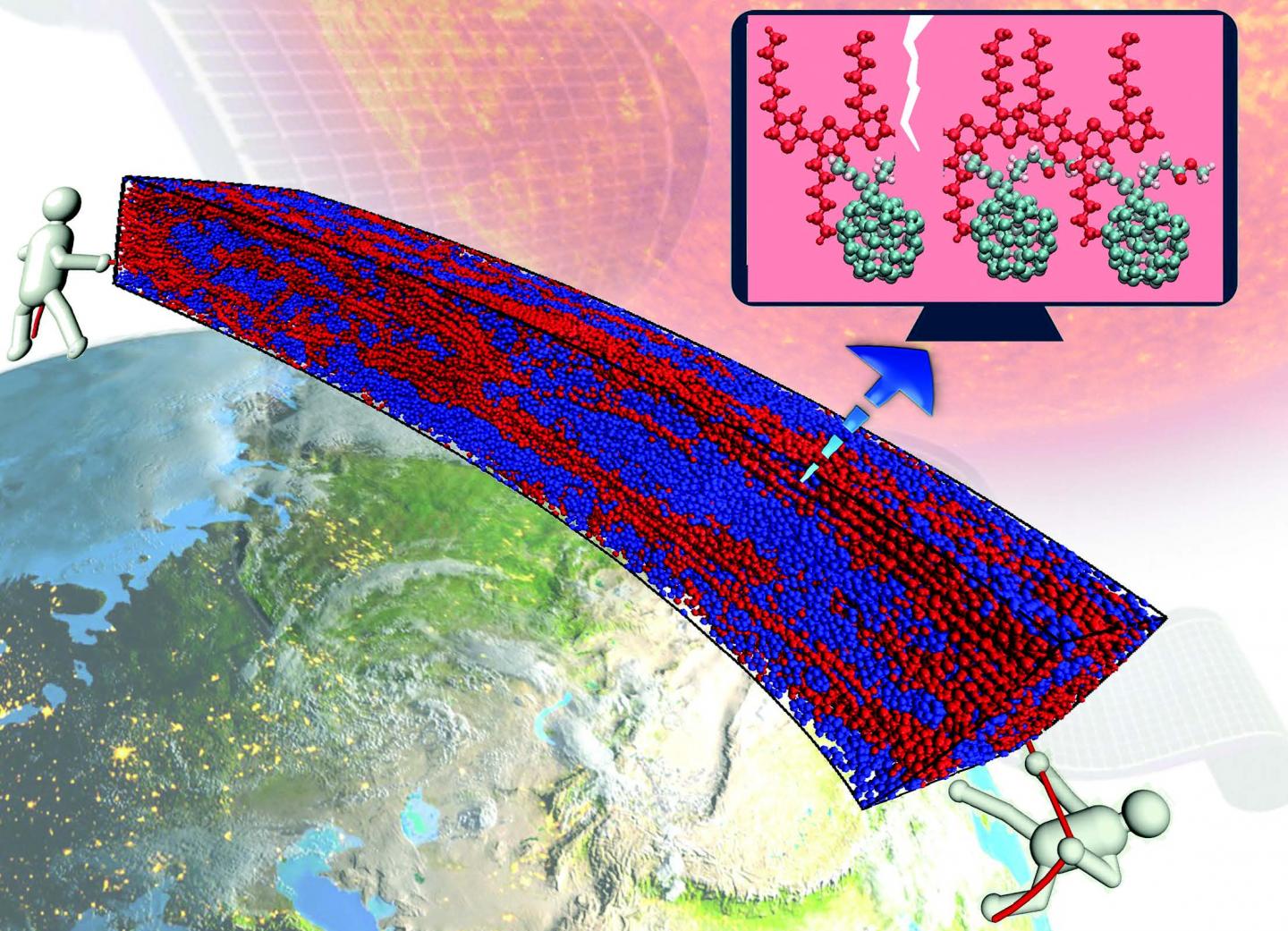 Today, solar energy provides 2% of U.S. power. However, by 2050, renewables are predicted to be the most used energy source (surpassing petroleum and other liquids, natural gas, and coal) and solar will overtake wind as the leading source of renewable power. To reach that point, and to make solar power more affordable, solar technologies still require a number of breakthroughs. One is the ability to more efficiently transform photons of light from the Sun into useable energy.

Organic photovoltaics max out at 15% to 20% efficiency — substantial, but a limit on solar energy’s potential. Lehigh University engineer Ganesh Balasubramanian, like many others, wondered if there were ways to improve the design of solar cells to make them more efficient?

Balasubramanian, an associate professor of Mechanical Engineering and Mechanics, studies the basic physics of the materials at the heart of solar energy conversion — the organic polymers passing electrons from molecule to molecule so they can be stored and harnessed — as well as the manufacturing processes that produce commercial solar cells.

Using the Frontera supercomputer at the Texas Advanced Computing Center (TACC) — one of the most powerful on the planet — Balasubramanian and his graduate student Joydeep Munshi have been running molecular models of organic solar cell production processes, and designing a framework to determine the optimal engineering choices. They described the computational effort and associated findings in the May issue of IEEE Computing in Science and Engineering.

“When engineers make solar cells, they mix two organic molecules in a solvent and evaporate the solvent to create a mixture which helps with the exciton conversion and electron transport,” Balasubramanian said. “We mimicked how these cells are created, in particular the bulk heterojunction — the absorption layer of a solar cell. Basically, we’re trying to understand how structure changes correlate with the efficiency of the solar conversion?”

“A lot of research uses machine learning on raw data,” Balasubramanian said. “But more and more, there’s an interest in using physics-educated machine learning. That’s where I think lies the most benefit. Machine learning per se is simply mathematics. There’s not a lot of real physics involved in it.”

Writing in Computational Materials Science in February 2021, Balasubramanian and Munshi along with Wei Chen (Northwestern University), and TeYu Chien (University of Wyoming) described results from a set of virtual experiments on Frontera testing the effects of various design changes. These included altering the proportion of donor and receptor molecules in the bulk heterojunctions, and the temperature and amount of time spent in annealing — a cooling and hardening process that contributes to the stability of the product.

They harnessed the data to train a class of machine learning algorithms known as support vector machines to identify parameters in the materials and production process that would generate the most energy conversion efficiency, while maintaining structural strength and stability. Coupling these methods together, Balasubramanian’s team was able to reduce the time required to reach an optimal process by 40%.

“At the end of the day, molecular dynamics is the physical engine. That’s what captures the fundamental physics,” he said. “Machine learning looks at numbers and patterns, and evolutionary algorithms facilitate the simulations.”

Like many industrial processes, there are trade-offs involved in tweaking any facet of the manufacturing process. Faster cooling may help increase power efficiency, but it may make the material brittle and prone-to-break, for instance. Balasubramanian and his team employed a multi-objective optimization algorithm that balances the benefits and drawbacks of each change to derive the overall optimal manufacturing process.

“When you try to optimize one particular variable, you are looking at the problem linearly,” he said. “But most of these efforts have multi-pronged challenges that you’re trying to solve simultaneously. There are trade-offs that you need to make, and synergistic roles that you must capture, to come to the right design.”

Balasubramanian’s simulations matched experimental results. They determined that the make-up of the heterojunction and the annealing temperature/timing have the largest effects on overall efficiency. They also found what proportion of the materials in the heterojunction is best for efficiency.

“There are certain conditions identified in literature which people claim are the best conditions for efficiency for those select molecules and processing behavior,” he said. “Our simulation were able to validate those and show that other possible criteria would not give you the same performance. We were able to realize the truth, but from the virtual world.”

With an award of more time on Frontera in 2021-22, Balasubramanian will add further layers to the machine learning system to make it more robust. He plans to add experimental data, as well as other modalities of computer models, such as electronic structure calculations.

“Heterogeneity in the data will improve the results,” he said. “We plan to do first principle simulations of materials and then feed that data into the machine learning model, as well as data from coarse-grained simulations.”

Balasubramanian believes that current organic photovoltaics may be reaching the limits of their efficiency. “There’s a wall that’s hard to penetrate and that’s the material,” he said. “These molecules we’ve used can only go so far. The next thing to try is to use our framework with other molecules and advanced materials.”

His team mined the literature to understand the features that increase solar efficiency and then trained a machine learning model to identify potential new molecules with ideal charge transport behaviors. They published their research in the Journal of Chemical Information and Modeling. Future work on Frontera will use Balasubramanian’s framework to explore and computationally test these alternative materials, assuming they can be produced.

“Once established, we can take realistic molecules that are made in the lab and put them in the framework we’ve created,” he said. “If we discover new materials that perform well, it will reduce the cost of solar power generation devices and help Mother Earth.”

Balasubramanian’s research harnesses the two things that computer simulations are critical for, he says. “One is to understand the science that we cannot study with the tools that we have in the real world. And the other is to expedite the science – streamline what we really have to do, which reduces our cost and time to make things and physically test them.”