Energy unleashed by submarine volcanoes could power a continent 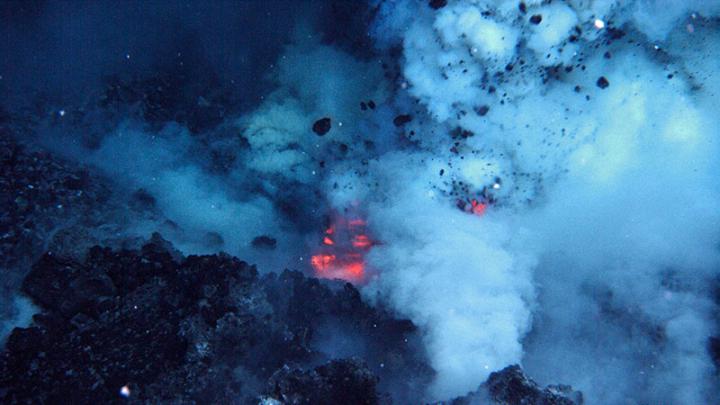 Credit: Image courtesy of the National Oceanic and Atmospheric Administration

Volcanic eruptions deep in our oceans are capable of extremely powerful releases of energy, at a rate high enough to power the whole of the United States, according to research published today.

Eruptions from deep-sea volcanoes were long-thought to be relatively uninteresting compared with those on land. While terrestrial volcanoes often produce spectacular eruptions, dispersing volcanic ash into the environment, it was thought that deep marine eruptions only produced slow moving lava flows.

But data gathered by remotely operated vehicles deep in the North East Pacific and analysed by scientists at the University of Leeds, has revealed a link between the way ash is dispersed during submarine eruptions and the creation of large and powerful columns of heated water rising from the ocean floor, known as megaplumes.

These megaplumes contain hot chemical-rich water and act in the same way as the atmospheric plumes seen from land-based volcanoes, spreading first upwards and then outwards, carrying volcanic ash with them. The size of megaplumes is immense, with the volumes of water equivalent to forty million Olympic-sized swimming pools. They have been detected above various submarine volcanoes but their origin has remained unknown. The results of this new research show that they form rapidly during the eruption of lava.

Together they developed a mathematical model which shows how ash from these submarine eruptions spreads several kilometres from the volcano. They used the ash pattern deposited by a historic submarine eruption to reconstruct its dynamics. This showed that the rate of energy released and required to carry ash to the observed distances is extremely high – equivalent to the power used by the whole of the USA.

David Ferguson said: “The majority of Earth’s volcanic activity occurs underwater, mostly at depths of several kilometres in the deep ocean but, in contrast to terrestrial volcanoes, even detecting that an eruption has occurred on the seafloor is extremely challenging. Consequently, there remains much for scientists to learn about submarine volcanism and its effects on the marine environment.”

The research shows that submarine eruptions cause megaplumes to form but the release of energy is so rapid that it cannot be supplied from the erupted molten lava alone. Instead, the research concludes that submarine volcanic eruptions lead to the rapid emptying of reservoirs of hot fluids within the earth’s crust. As the magma forces its way upwards towards the seafloor, it drives this hot fluid with it.

Sam Pegler added: “Our work provides evidence that megaplumes are directly linked to the eruption of lava and are responsible for transporting volcanic ash in the deep ocean. It also shows that plumes must have formed in a matter of hours, creating an immense rate of energy release.

David Ferguson adds: “Observing a submarine eruption in person remains extremely difficult but the development of instruments based on the seafloor means data can be streamed live as the activity occurs.

Efforts like these, in concert with continued mapping and sampling of the ocean floor means the volcanic character of our oceans is slowly being revealed.”

The University of Leeds

The University was awarded a Gold rating by the Government’s Teaching Excellence Framework in 2017, recognising its ‘consistently outstanding’ teaching and learning provision. Twenty-six of our academics have been awarded National Teaching Fellowships – more than any other institution in England, Northern Ireland and Wales – reflecting the excellence of our teaching. http://www.leeds.ac.uk Follow University of Leeds or tag us in to coverage: Twitter Facebook LinkedIn Instagram