U.S. Secretary of Energy Jennifer Granholm visited Oak Ridge National Laboratory to attend a groundbreaking ceremony for the U.S. Stable Isotope Research and Development Center. The facility is slated to receive $75 million in funding from the Inflation Reduction Act. 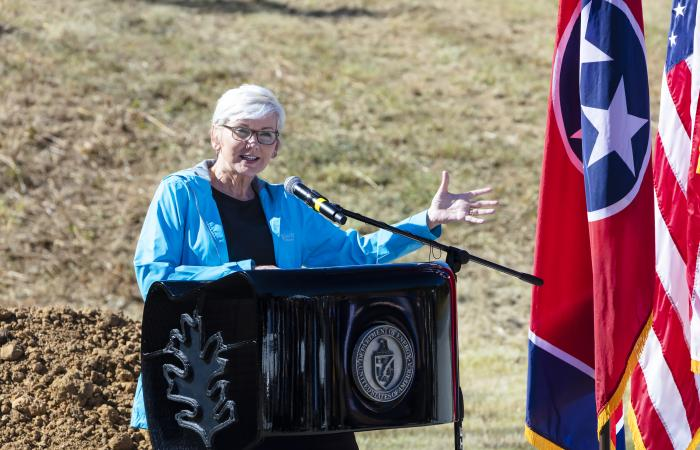 U.S. Secretary of Energy Jennifer Granholm visited Oak Ridge National Laboratory to attend a groundbreaking ceremony for the U.S. Stable Isotope Research and Development Center. The facility is slated to receive $75 million in funding from the Inflation Reduction Act.

“The Biden-Harris Administration is proud to help Oak Ridge open the doors of this new center — along with the other projects receiving funding as part of the President’s agenda, here and across our national labs. This funding is a down payment on our clean energy future, and we are excited to see what America will now achieve because of it,” Granholm said.

“Today, thanks to the Inflation Reduction Act, we have a huge opportunity to bolster the United States’ position as a global leader in the production of rare isotopes,” said DOE Under Secretary for Science and Innovation Geraldine Richmond.

“To maintain the national labs as the crown jewels they’ve always been, we must invest in their core infrastructure to make them more resilient and sustainable, and build out new capabilities our country needs, like the Stable Isotope Production and Research Center we’re breaking ground on today,” said Asmeret Asefaw Berhe, DOE Office of Science Director.

East Tennessee has a rich history of producing enriched stable isotopes, generating more than 230 between 1945-1998 at the now-decommissioned calutron facility at the Y-12 National Security Complex. However, those stockpiles are now being depleted, and the U.S. has no existing domestic broad scope enrichment capability.

“The construction of a new isotope production facility at ORNL is a historic milestone,” ORNL Director Thomas Zacharia said. “Providing isotopes that can’t be made anywhere else is central to our identity as a national laboratory, and we are fortunate to have some of the most talented experts in the world advancing this capability here at a time of great international need.”

ORNL has spent the past decade designing, researching, developing and prototyping the two types of isotope separation equipment that SIPRC will employ. The center will be capable of simultaneously enriching multiple stable isotopes from across the periodic table. It’s also been designed with future expansion in mind.

On her visit to Tennessee, Sec. Granholm also met with Knoxville community leaders, Director Thomas Zacharia and Diana Hun, ORNL’s Building Envelope Research Group Leader to discuss an energy efficiency retrofit project. DOE is funding a $5 million project for ORNL to demonstrate modular overclad panels in eight to 12 single-family attached public housing homes and one commercial building. The retrofit project is expected to reduce thermal load in the structures by 75% by using low-carbon exterior panels and a high-tech system that will allow the panels to be placed more quickly and economically.

Granholm then met with union workers constructing ORNL’s Translational Research Capability, a 100,000-square-foot facility that will contain laboratories for various types of research, including those that require special environments, like low vibration, electromagnetic shielding or inert atmosphere. Granholm toured TRC, which is scheduled for completion in 2023, and learned from researchers how the facility will support advances in quantum information science; materials science; and other multidisciplinary research areas.