Professor emeritus of chemistry and former director of the Lawrence Berkeley National Laboratory Charles (Chuck) Shank is one of two scientists to receive the Enrico Fermi Award, one of the federal government’s oldest and most prestigious awards for scientific achievement. The other recipient is UCLA physicist Claudio Pellegrini. The pair were at the White House Tuesday to collect their medals and shared a $50,000 honorarium from President Obama. 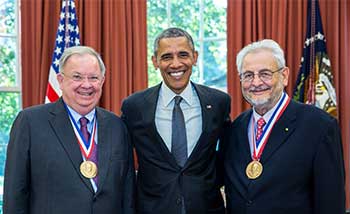 Shank is widely acknowledged as the founder and builder of the field of ultrafast science. As the director of the Berkeley Lab from 1989 through 2004, he launched the U.S. Department of Energy’s Joint Genome Institute, which decoded three human chromosomes in the Human Genome Project, developed a supercomputing center, pioneered new applications for the Advanced Light Source and helped bring the DOE into the nanoscience age, according to the White House announcement of the award.

The Fermi award honors the memory of Nobel Laureate Enrico Fermi, the first scientist to achieve a nuclear chain reaction and a pioneer in nuclear and particle physics. It is administered on behalf of the White House by the DOE. The award has been presented since 1956 in recognition of “distinguished achievement, leadership and service related to all basic and applied research, science, and technology” supported by DOE and its programs.

In addition to holding an appointment as professor of chemistry at Berkeley, Shank also was a professor of physics and electrical engineering and computer sciences, while he served as Berkeley Lab director. He is a Berkeley alumnus, as well, earning his undergraduate, master’s and Ph.D. degrees here.

Learn more about Shank’s achievements on the Berkeley Lab’s website.