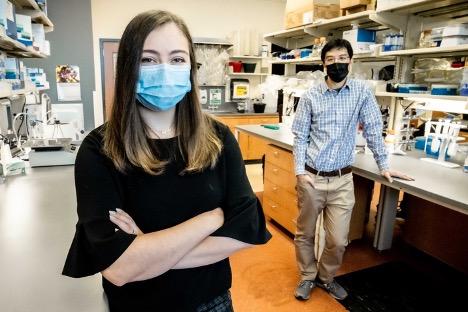 For the brain to learn, retain memories, process sensory information, and coordinate body movements, its groups of nerve cells must generate coordinated electrical signals. Disorder in synchronous firing can impair these processes and, in extreme cases, lead to seizures and epilepsy.

Synchrony between neighboring neurons depends on the protein connexin 36, an essential element of certain types of synaptic connections that, unlike classical chemical synapses, pass signals between neurons through direct electrical connections. For more than 15 years, scientists have debated the tie between connexin 36 and epilepsy.

Now, a team of Virginia Tech scientists led by Yuchin Albert Pan, an associate professor at the Fralin Biomedical Research Institute at VTC, have identified a new link between seizures and connexin 36 deficiency. The discovery, published today (Jan. 11, 2021) in Frontiers in Molecular Neuroscience,, found that this interaction may make the brain more prone to having seizures.

Alyssa Brunal, a recent graduate of Virginia Tech’s translational biology, medicine, and health doctoral program, working with her mentor Pan, developed new models for studying the relationship between connexin 36 and seizures and confirmed the relationship.

Zebrafish serve as a powerful animal model, allowing researchers to evaluate the effects of connexin 36 on the whole brain in an intact living system during neural hyperactivity.

As an essential component of electrically coupled synapses between neurons, connexin 36 plays an important role in rapid and synchronous activation of interconnected neworks of neurons within the brain, which is necessary for normal brain processes.

Pan, who frequently uses larval zebrafish in studies, said the fish are ideal because they develop outside the womb, are translucent, and their entire brains are small enough to fit entirely under a microscope.

“Using modern microscopy techniques, we can see in an intact animal what is happening inside the brain,” said Pan, who is also the research institute’s Commonwealth Center for Innovative Technology Eminent Research Scholar in Developmental Neuroscience, and an associate professor in the department of biomedical sciences and pathobiology of the Virginia-Maryland College of Veterinary Medicine.

Brunal created dozens of whole-brain maps of zebrafish for the study.

The researchers used varying doses of a seizure-inducing drug, which causes neuronal hyperactivation, one of the main contributors to seizures. By comparing normal, wild-type zebrafish and mutant zebrafish with connexin 36 deficiencies, they found that connexin 36 deficiency altered the susceptibility to neuronal hyperactivity in a brain-region and drug-dose dependent manner.

Having established that a lack of connexin protein changed seizure susceptibility, they wondered if the hyperactivity associated with seizures, in turn, affected the expression of the protein. To test this, they applied the seizure-inducing drug to only the wild-type zebrafish, but this time, instead of looking for hyperactivity in the brain, they looked for expression of connexin 36. The results were striking.

The drug-induced hyperactivity caused an acute drop in connexin 36 levels across the brain, which recovered over time.

“I was like, holy cow, there’s something actually happening to the protein. So not only is the protein affecting hyperactivity, we’re also having some effect on the protein itself,” Brunal said. “I think that’s what really broke the project wide open.”

The results were impressive, Pan said.

“A lot of times in science, you don’t know what’s going on until you painstakingly quantify the microscope images and see something that emerges from statistical analysis to a level of significance, but in one instance in this study, the connexin 36 was visibly gone,” Pan said. “We thought, there’s got to be something important there.”

They applied a connexin 36-blocking drug on wild-type zebrafish, before administering the seizure-inducing drug. They compared the results to a control group of wild-type zebrafish that received only the seizure-inducing drug. The first group had significantly more neuronal hyperactivity, suggesting that an acute loss of connexin 36 may lead to more seizures.

While it’s well known that having one seizure increases the likelihood of subsequent events, the mechanisms underlying this clinical phenomena are not well understood. This study describes a novel mechanism: seizures reduce connexin 36 levels in zebrafish models, and may contribute to the onset of subsequent seizures.

Pan, the principal investigator, and Brunal, who defended her doctoral dissertation based on the study’s findings, are joined as authors on the paper by postdoctoral associate Kareem Clark, and research associate Manxiu Ma of the Fralin Biomedical Research Institute, and Ian Woods, an associate professor in the biology department of Ithaca College.

This study is funded by the Commonwealth Research Commercialization Fund and the Fralin Biomedical Reserch Institute.

They showed that a chronic connexin 36 deficiency in the mutant zebrafish made them more suspectible to brain hyperactivity, which in turn reduced the expression of connexin 36. Next, they wanted to know if the acute reduction of connexin 36 could predict the likelihood of future seizures.