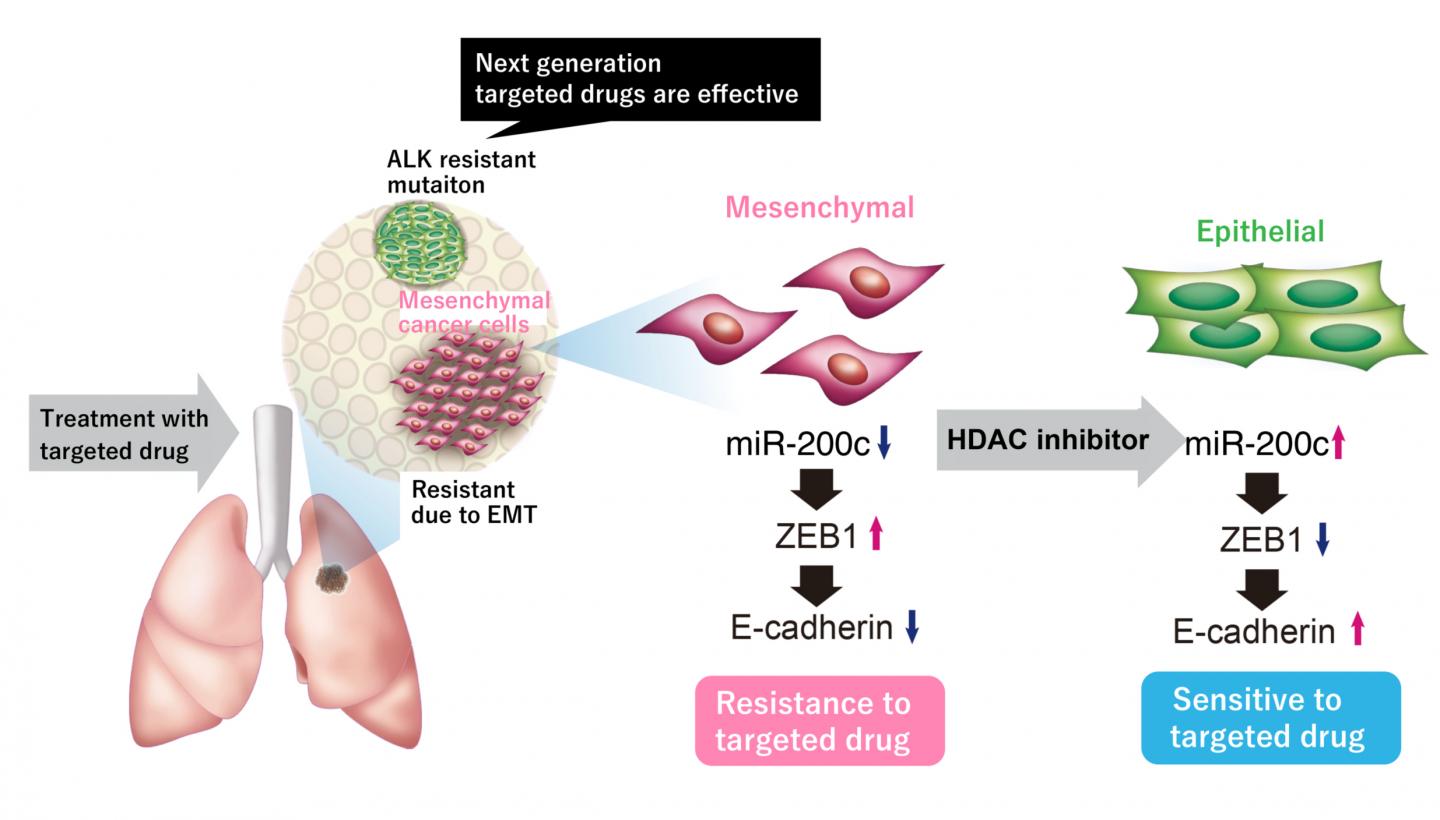 Although molecular-targeted drugs*1) have been known to show high efficacy to lung cancer patients, they also have limitations due to acquiring resistance to the drug used. Recurrence of target tumors may therefore take place, which is a serious problem. It has been well recognized that genetic mutation is somehow induced in the cancer cells on which the molecular-targeted drug is effective and that consequently, the structure of the target molecule of the cancer cell is changed; thus the cancer cell acquires resistance. In addition to genetic mutation, it has recently been suspected that epithelial-to-mesenchymal transition (EMT)*2) is another mechanism for cancer to acquire such resistance. However, the detailed relationship between EMT and drug resistance has not been elucidated, and medical treatments to overcome such problems have not been established.

The present research team at Kanazawa University analyzed tumor tissues from patients with ALK-positive lung cancer*3) that acquired resistance to crizonitib, a molecular-targeted drug. As a result, it was revealed that a part of the tumor lesion developed a genetic mutation while another part underwent EMT. It was therefore thought that genetic mutation(s) and EMT should be individually responsible for the resistance against the molecular-targeted drug (Figure 1).

Next generation molecular-targeted drugs that should overcome genetic mutation problems have already been used clinically, whereas no therapeutic means have been developed for the resistance due to EMT. The team investigated the mechanism for inducing cancer cell EMT. As a result, it was found that cancer cells acquired resistance to the molecular-targeted drug by transforming epithelial characteristics into mesenchymal ones, caused by reduction in the cancer cells of the expression of miR-200c (one of the microRNAs that regulate gene expression). Reduction of miR-200c expression augments the level of ZEB1, a transcription factor that induces EMT, and reduces the level of E-cadherin, a protein involved in cell adhesion.

Next, the team searched for compounds that could augment the expression of miR-200c to normal levels, in the hope that the resistance could be overcome by possible reverse-transition of mesenchymal cancer cells into epithelial ones. As a result, treatment with an HDAC (histone deacetylase) inhibitor*4), quisinostat, reversed the transformation of mesenchymal cancer cells into epithelial cells, which led to successful sensitization of the resultant cells to molecular-targeted drugs (Figure 2).

In addition, it was revealed in animal experiments that acquisition of cancer cell resistance to the molecular-targeted drug was evidently prevented by quisinostat treatment prior to the drug treatment.

Due to these results, it is now expected that patients with a cancer demonstrated to have EMT and resistance against targeted drugs may be, by overcoming such resistance, completely cured or may have a significant delay of cancer recurrence by sequential treatment with an HDAC inhibitor and a next generation molecular-targeted drug.

The team will now investigate the selection of the best HDAC inhibitor in terms of efficacy and adverse effects as well as the clinical examination of therapy in combination with next generation molecular-targeted drugs.

A molecular-targeted drug acts on a specific molecule that plays an important role in cancer proliferation and survival. In 2001, imanitib (brand name, Gleevec) against leukemia and trastudumab (brand name, Herceptin) against breast cancer were approved for clinical usage for the first time as molecular target drugs. Nowadays, more than 40 such molecular-targeted drugs are approved for cancer treatment in Japan.

Epithelial-to-mesenchymal transition (EMT) is a process by which epithelial cells lose their cell polarity and cell-cell adhesion ability, and gain invasive properties to become mesenchymal cells. EMT is reported to be involved in cancer metastasis and the acquisition of drug resistance.

ALK-positive lung cancer is induced by fusion of the ALK (anaplastic lymphoma kinase) gene with another gene such as EML4, and accounts for about 5% of the Japanese non-small cell lung cancer patients. The ALK-positive lung cancer cells survive and proliferate due to signaling from the ALK-fusion protein. ALK tyrosine kinase inhibitor, a molecular target drug, is quite effective against this type of cancer.

Histone is a basic protein that plays important roles in condensing DNA. Functions of HDAC include prevention of the expression of genes that control cancer cell mitosis and cell morphology. In multiple myeloma, the level of HDAC activity is observed to be abnormally high, and therefore HDAC inhibitors are expected to exert anti-tumor effects.

How to improve care for patients with disabilities? We need more…