Elevation matters when it comes to climate change, deforestation and species survival 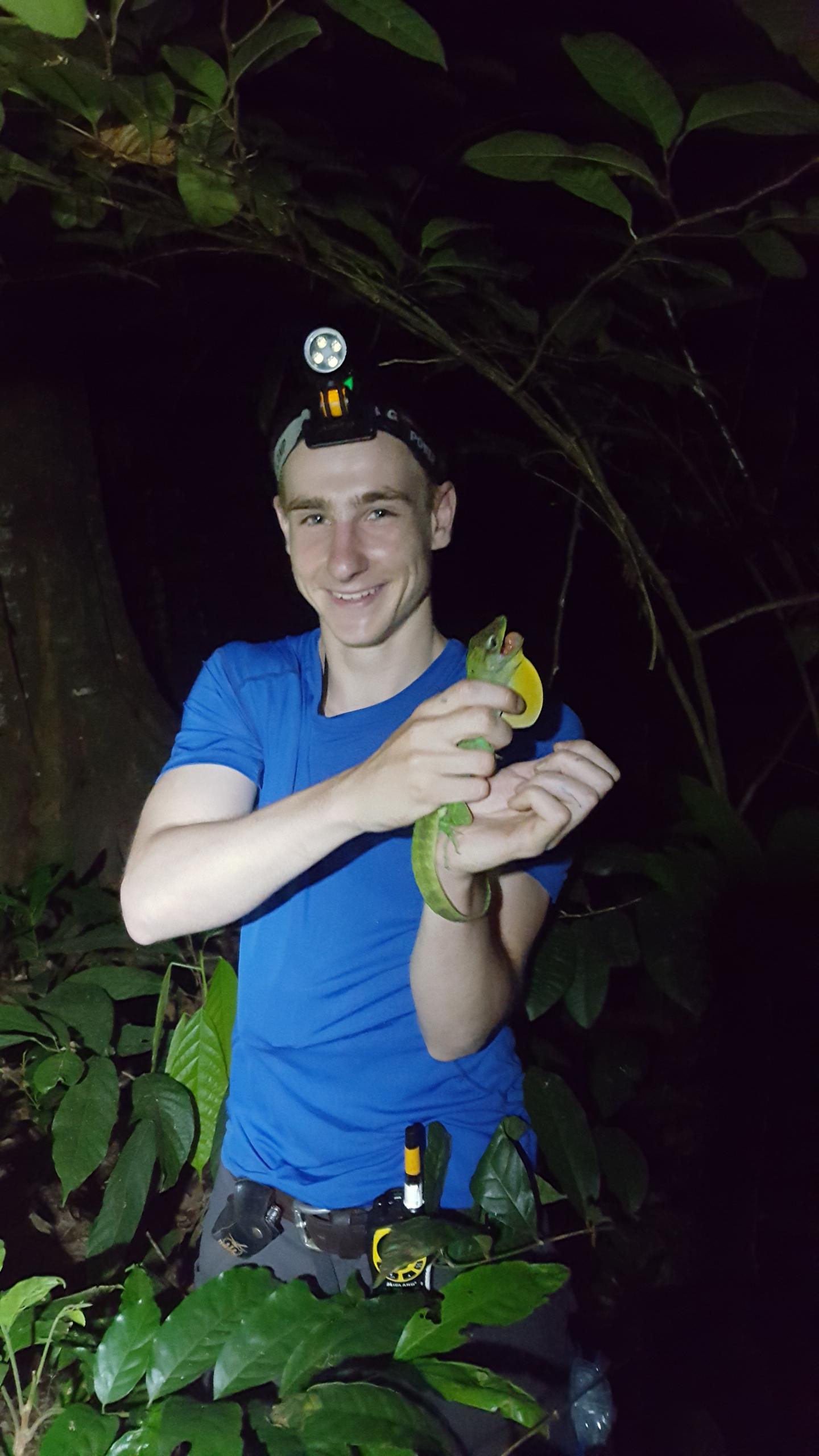 TORONTO, ON (Canada) – University of Toronto student George Sandler was shocked to see the rainforest floor suddenly come to life around him, as if in a scene from an Indiana Jones movie.

“The forest floor started rustling around me,” says Sandler, “as dozens of crabs emerged from holes and crevices. Some were huge, the size of dinner plates. I even spotted a hermit crab climbing up a tree, lugging its heavy shell along with it.”

But Sandler wasn’t in the field to study crabs. He was in the Dominican Republic to take a census of the region’s Anolis lizard species for a study on the effects of deforestation being conducted by researchers Luke Mahler, Luke Frishkoff and collaborators. In the Caribbean nation, deforestation is the main form of natural habitat loss as residents cut down rainforest in order to produce charcoal, as well as create pastures for livestock and farmland for crops.

It is no surprise that deforestation has a profound effect on biodiversity; scientists have been studying this problem around the globe for decades. What is surprising is the difficulty they still face in making detailed predictions about which species survive, especially in relation to other factors such as climate change and natural local conditions.

Now, using the data collected in the census, the research team has discovered details about how Anolis lizards are being affected by the loss of their habitat.

“When it comes to predicting the effects of deforestation,” says Mahler, “elevation matters.”

Mahler is an assistant professor in the Department of Ecology & Evolutionary Biology (EEB) in the Faculty of Arts & Science at the University of Toronto. Frishkoff led the research while he was a postdoctoral fellow in Mahler’s lab at U of T and is lead author of the paper describing their findings, published today in Nature Ecology & Evolution; he is currently an assistant professor at the University of Texas at Arlington. Sandler and researchers from the National Museum of Natural History in Santo Domingo were also co-authors.

Mahler and Frishkoff analyzed populations of lizards in both lowland and highland regions affected by deforestation. Generally, the lowlands are warmer than the highlands due to altitude; also, forest canopy blocks direct sunlight, making forests at any altitude cooler than their immediate surroundings.

“When the forest is cut down at higher elevations,” says Frishkoff, “the newly created high elevation pastures become filled with species we saw down in the warmer lowlands. But, the locally adapted mountain lizards cannot survive.”

As it is in many regions around the world, the problem of deforestation in the Dominican Republic is dire. In 2016, Mahler announced the discovery of a previously unknown chameleon-like Anolis lizard on the island of Hispaniola. In the paper describing the discovery, Mahler and his co-authors recommended that the new species, dubbed Anolis landestoyi, be immediately classified as critically endangered because the lizard was threatened by illegal clear-cutting in the region.

Unlike the crabs that crowded around Sandler in the rainforest, the lizards were more elusive and difficult to survey. In order to obtain accurate counts, the students employed a technique known as mark-resight.

“We hiked out to our designated plots,” says Sandler, who was an undergraduate student while conducting the field work and is currently an EEB graduate student at U of T. “Then we walked around looking for lizards. We carried a paint spray gun filled with a non-toxic, water soluble paint–a different colour for each of the six observation periods. If we saw a lizard we would note the species, if it had any paint on it already, and the colour of the paint. Then we would spray the lizard with the paint gun we were carrying, a task that was a little tricky with some of the more skittish species!”

Paint on a lizard indicated that it had already been counted; and the number of unpainted lizards that were observed during each period allowed the researchers to calculate how many lizards were going uncounted.

“It’s not your typical summer job,” says Mahler. “Each survey is essentially a game in which you try to find all the lizards in an area and zap them with paint. It’s a messy affair, but we get great data from it.”

“Our results help us better understand the likely consequences of climate change and how it will interact with human land-use,” says Frishkoff.

For lowland forest Anolis lizards, deforestation just means a decline in abundance or relocating to the highlands. But for highland species, the situation is more critical. Unlike their lowland cousins, they have reached high ground already and in the face of deforestation have nowhere to go–a situation facing more and more species around the world.

“Our data suggest that while many lowland Anolis species might not be seriously affected by deforestation and the gradual warming brought about by climate change,” says Frishkoff, “the opposite is true for the unique mountain lizard species which do not tolerate land-use change well, and which are already on the top of the island.

“Land-use and climate change are a double whammy for these species. If we cut down the mountain forests these lizards have nowhere left to go. Gradual warming might push species up slope, but when you’re already at the top of the mountain, you can’t move any higher.”

New light into the recent evolution of the African rift valley

The fellowship of the wing: Pigeons flap faster to fly together