Electrons take the fast and slow lanes at the same time

Imagine a road with two lanes in each direction. One lane is for slow cars, and the other is for fast ones. For electrons moving along a quantum wire, researchers in Cambridge and Frankfurt have discovered that there are also two ‘lanes’, but electrons can take both at the same time! 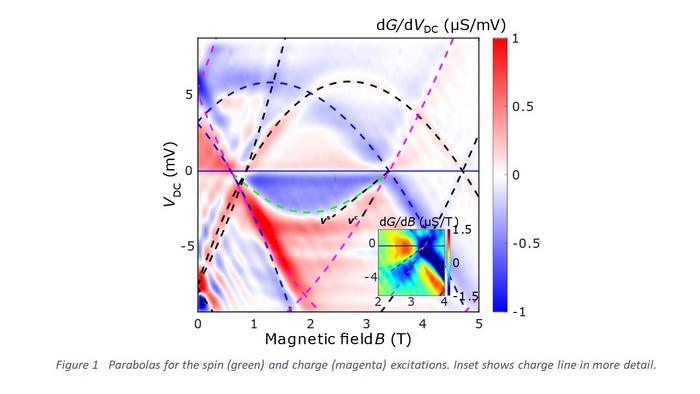 Imagine a road with two lanes in each direction. One lane is for slow cars, and the other is for fast ones. For electrons moving along a quantum wire, researchers in Cambridge and Frankfurt have discovered that there are also two ‘lanes’, but electrons can take both at the same time!

Current in a wire is carried by the flow of electrons. When the wire is very narrow (one-dimensional, 1D) then electrons cannot overtake each other, as they strongly repel each other. Current, or energy, is carried instead by waves of compression as one particle pushes on the next.

It has long been known that there are two types of excitation for electrons, as in addition to their charge they have a property called spin. Spin and charge excitations travel at fixed, but different speeds, as predicted by the Tomonaga-Luttinger model many decades ago. However, theorists are unable to calculate what precisely happens beyond only small perturbations, as the interactions are too complex. The Cambridge team has measured these speeds as their energies are varied, and find that a very simple picture emerges (now published in the journal Science Advances).  Each type of excitation can have low or high kinetic energy, like cars on a road, with the well-known formula E=1/2 mv2, which is a parabola. But for spin and charge the masses m are different, and, since charges repel and so cannot occupy the same state as another charge, there is twice as wide a range of momentum for charge as for spin. The results measure energy as a function of magnetic field, which is equivalent to momentum or speed v, showing these two energy parabolas, which can be seen in places all the way up to five times the highest energy occupied by electrons in the system.

‘It’s as if the cars (like charges) are travelling in the slow lane but their passengers (like spins) are going more quickly, in the fast lane’, explained Pedro Vianez, who carried out the measurements for his PhD at the Cavendish Laboratory in Cambridge. ‘Even when the cars and passengers slow down or speed up, they still remain separate!’

‘What is remarkable here is that we are no longer talking about electrons but, instead, about composite (quasi)particles of spin and charge – commonly dubbed spinons and holons, respectively. For a long time, these were believed to become unstable at such high energies, yet what is observed points to exactly the opposite – they seem to behave in a way very similar to normal, free, stable electrons, each with their own mass, except that they are not, in fact, electrons, but excitations of a whole sea of charges or spins!’ said Oleksandr Tsyplyatyev, the theorist who led the work at the Goethe University in Frankfurt.

‘This paper represents the culmination of over a decade of experimental and theoretical work on the physics of one-dimensional systems’, said Chris Ford, who led the experimental team. ‘We were always curious to see what would happen if we took the system to higher energies, so we progressively improved our measurement resolution to pick out new features. We fabricated a series of semiconducting arrays of wires ranging from 1 to 18 microns in length (that is, down to a thousandth of the millimetre or approximately 100 times thinner than a human hair), with as few as 30 electrons in a wire, and measured them at 0.3 K (or in other words, -272.85 ⚬C, ten times colder than outer space).’

Electrons tunnel from the 1D wires into an adjacent two-dimensional electron gas, which acts as a spectrometer, producing a map of the relation between energy and momentum. ‘This technique is in every way very similar to angle-resolved photoemission spectroscopy (ARPES), which is a commonly used method for determining the band structure of materials in condensed matter physics. The key difference is that, rather than probing at the surface, our system is buried a hundred nanometres below it’, said Vianez. This allowed the researchers to achieve resolution and control unprecedented for this type of spectroscopy experiment.

These results now open the question of whether this spin-charge separation of the whole electron sea remains robust beyond 1D, e.g., in high-temperature superconducting materials. It may also now be applied to logic devices that harness spin (spintronics), which offer a drastic reduction (by three orders of magnitude!) of the energy consumption of a transistor, simultaneously improving our understanding of quantum matter as well as offering a new tool for engineering quantum materials.

More information, including a copy of the paper, can be found online at the Science Advances press package athttps://www.eurekalert.org/press/vancepak/.

For any reporters having difficulties accessing the paper from the press package, please have them contact [email protected]