Neutrinos may be the key to finally solving a mystery of the origins of our matter-dominated universe, and preparations for two major, billion-dollar experiments are underway to reveal the particles’ secrets. Now, a team of nuclear physicists have turned to the humble electron to provide insight for how these experiments can better prepare to capture critical information. Their research, which was carried out at the U.S. Department of Energy’s Thomas Jefferson National Accelerator Facility and recently published in Nature, reveals that major updates to neutrino models are needed for the experiments to achieve high-precision results. 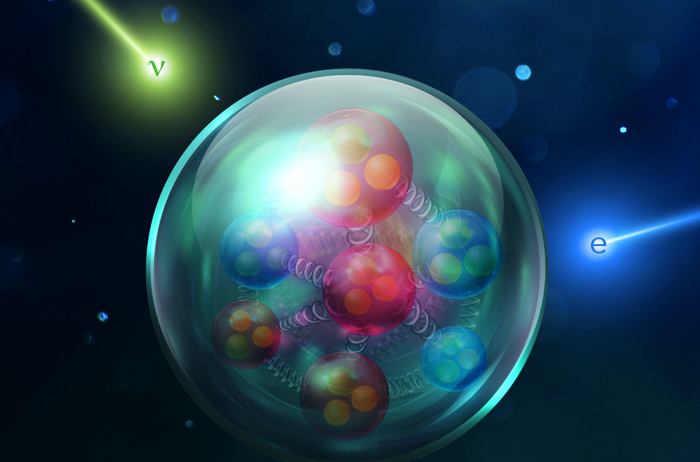 Neutrinos may be the key to finally solving a mystery of the origins of our matter-dominated universe, and preparations for two major, billion-dollar experiments are underway to reveal the particles’ secrets. Now, a team of nuclear physicists have turned to the humble electron to provide insight for how these experiments can better prepare to capture critical information. Their research, which was carried out at the U.S. Department of Energy’s Thomas Jefferson National Accelerator Facility and recently published in Nature, reveals that major updates to neutrino models are needed for the experiments to achieve high-precision results.

Neutrinos are ubiquitous, generated in copious numbers by stars throughout our universe. Though prevalent, these shy particles rarely interact with matter, making them very difficult to study.

“There is this phenomenon of neutrinos changing from one type to another, and this phenomenon is called neutrino oscillation. It’s interesting to study this phenomenon, because it is not well understood,” said Mariana Khachatryan, a co-lead author on the study who was a graduate student at Old Dominion University in Professor and Eminent Scholar Larry Weinstein’s research group when she contributed to the research. She is now a postdoctoral research associate at Florida International University.

One way to study neutrino oscillation is to build gigantic, ultra-sensitive detectors to measure neutrinos deep underground. The detectors typically contain dense materials with large nuclei, so neutrinos are more likely to interact with them. Such interactions trigger a cascade of other particles that are recorded by the detectors. Physicists can use that data to tease out information about the neutrinos.

“The way that neutrino physicists are doing that is by measuring all particles coming out of the interaction of neutrinos with nuclei and reconstructing the incoming neutrino energy to learn more about the neutrino, its oscillations, and to measure them very, very precisely,” explained Adi Ashkenazi. Ashkenazi is the study’s contact author who worked on this project as a research scholar in Professor Or Hen’s research group at the Massachusetts Institute of Technology. She is now a senior lecturer at Tel Aviv University.

“The detectors are made of heavy nuclei, and the interactions of neutrinos with these nuclei are actually very complicated interactions,” Ashkenazi said. “Those neutrino energy reconstruction methods are still very challenging, and it is our work to improve the models we use to describe them.”

These methods include modeling the interactions with a theoretical simulation called GENIE, allowing physicists to infer the energies of the incoming neutrinos. GENIE is an amalgam of many models that each help physicists reproduce certain aspects of interactions between neutrinos and nuclei. Since so little is known about neutrinos, it’s difficult to directly test GENIE to ensure it will produce both accurate and high-precision results from the new data that will be provided by future neutrino experiments, such as the Deep Underground Neutrino Experiment (DUNE) or Hyper-Kamiokande.

To test GENIE, the team turned to a humble particle that nuclear physicists know a lot more about: the electron.

“This exploits the similarities between electrons and neutrinos. We are using electron studies to validate neutrino-nucleus interaction models,” said Khachatryan.

Neutrinos and electrons have many things in common. They both belong to the subatomic particle family called leptons, so they are both elementary particles that aren’t affected by the strong force.

In this study, the team used an electron-scattering version of GENIE, dubbed e-GENIE, to test the same incoming energy reconstruction algorithms that neutrino researchers will use. Instead of using neutrinos, they used recent electron results.

“Electrons have been studied for years, and the beams of the electrons have very precise energies,” said Ashkenazi. “We know their energies. And when we are trying to reconstruct that incoming energy, we can compare that to what we know. We can test how well our methods work for various energies, which is something you can’t do with neutrinos.”

The input data for the study came from experiments conducted with the CLAS detector at Jefferson Lab’s Continuous Electron Beam Accelerator Facility, a DOE user facility. CEBAF is the world’s most advanced electron accelerator for probing the nature of matter. The team used data that directly mirrored the simplest case to be studied in neutrino experiments: interactions that produced an electron and a proton (vs. a muon and a proton) from nuclei of helium, carbon and iron. These nuclei are similar to materials used in neutrino experiment detectors.

Further, the group worked to ensure that the electron version of GENIE was as parallel as possible to the neutrino version.

“We used the exact same simulation as used by neutrino experiments, and we used the same corrections,” explained Afroditi Papadopoulou, co-lead author on the study and a graduate student at MIT who is also in Hen’s research group. “If the model doesn’t work for electrons, where we are talking about the most simplified case, it will never work for neutrinos.”

Even in this simplest case, accurate modeling is crucial, because raw data from electron-nucleus interactions typically reconstruct to the correct incoming electron beam energy less than half the time. A good model can account for this effect and correct the data.

However, when GENIE was used to model these data events, it performed even worse.

“This can bias the neutrino oscillation results. Our simulations must be able to reproduce our electron data with its known beam energies before we can trust they will be accurate in neutrino experiments,” said Papadopoulou.

“The result is actually to point out that there are aspects of these energy reconstruction methods and models that need to be improved,” said Khachatryan. “It also shows a pathway to achieve this for future experiments.”

According to the study team, the aim is to achieve broad agreement between data and models, which will help ensure DUNE and Hyper-Kamiokande can achieve their expected high-precision results.-end-