Electron liquids on the cutting edge

As you walk in a crowded shopping mall, it is easier to maintain social distancing when passing through a large atrium than when you are on an escalator. The same is true for electrons: if forced into circumstances where they must move in single file, the electric repulsion between them can alter the flow of electrical current. This gives rise to special material properties that are long sought-after by physicists, for building fault-resistant quantum computers. 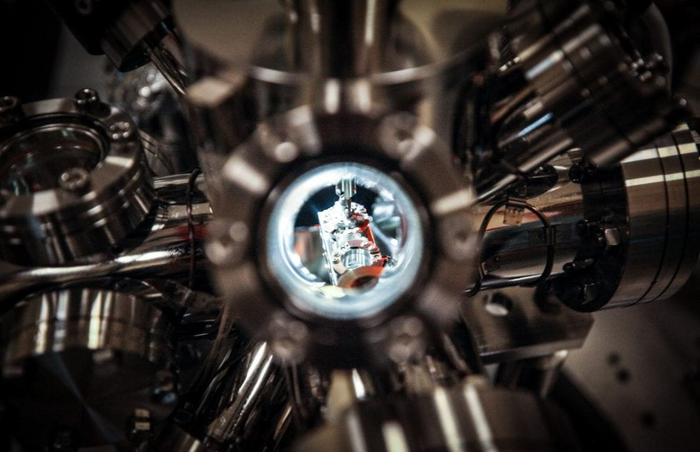 As you walk in a crowded shopping mall, it is easier to maintain social distancing when passing through a large atrium than when you are on an escalator. The same is true for electrons: if forced into circumstances where they must move in single file, the electric repulsion between them can alter the flow of electrical current. This gives rise to special material properties that are long sought-after by physicists, for building fault-resistant quantum computers.

Nanyang Assistant Professor Bent Weber, a faculty member at NTU’s School of Physical and Mathematical Sciences, is studying these exotic phases of matter using scanning tunneling microscopy, a technique that allows materials to be analyzed atom-by-atom. Recently, his team has performed experiments showing how a one-dimensional electron fluid can be controlled to an unprecedented degree. Their work has been published in the journal Nature Communications.

Electrons repel each other because they are all negatively charged. In ordinary three-dimensional materials, this repulsion is typically muted by the electrons’ freedom to move freely and avoid each other. But in situations where electrons are restricted to moving one-by-one in a single direction, this freedom can be severely curbed. Like people stuck on a crowded escalator, the electrons are locked into collective motion – each electron can only move if everyone moves.

What is harder to grasp from simple intuition is that, by virtue of the interactions between them, the electrons can condense into a novel liquid state at low temperatures in which they lose their individual identities, and behave collectively as if they were completely different particles.

This is called a Tomonaga-Luttinger liquid, a rare phase of matter that physicists have sought to understand for over half a century. Unfortunately, experimental studies of Tomonaga-Luttinger liquids have been hampered by the fact that they only appear in a few special settings, such as carbon nanotubes and atomically thin metal wires. Moreover, measuring their properties requires much more sensitive experimental techniques compared to those used in studying conventional materials.

In their new study, Asst. Prof. Weber and his team focused on a special setting in which Tomonaga-Luttinger liquids can form, based on two-dimensional materials called quantum spin Hall (QSH) insulators. These materials are electrically insulating in the interior, allowing electrons to reside only on their one-dimensional boundaries or “edges”.

Theoretical studies have predicted that when the temperature is reduced to nearly absolute zero (-273.15°C), the electrons in a helical Tomonaga-Luttinger liquid spontaneously group into entities called “parafermions”, made of four electrons each. Parafermions can encode quantum information in a manner that is resistant to corruption – something that current quantum computers suffer from. Quantum technologies based on parafermions would literally have an “edge” over other approaches, enabling fault-tolerant quantum computing.

In their experiments, Asst. Prof. Weber’s team probed the one-dimensional boundaries of quantum spin Hall insulators under a variety of conditions and, with the aid of theoretical models, characterized their properties. The strength of the interactions in a Luttinger liquid is determined by a single parameter, the Luttinger parameter K, which characterizes whether the electrons are unaffected or affected by their mutual repulsion.

“When K=1, the electrons are not interacting at all,” explains Asst. Prof. Weber. “When K is less than 0.5, the interactions are strong and the electrons are forced into collective motion. This is the situation where parafermions are predicted to exist.”

The team discovered that K is greatly influenced by the choice of substrate, meaning the base material on which the system is implanted. Moreover, interactions are stronger on certain types of edges. By varying these parameters, the team obtained K values between 0.21 and 0.33.

“This is a truly remarkable range of variation, since the Luttinger parameter can only range between zero and one”, says Asst. Prof. Weber. “Moreover, such low values of K have never been observed before in any helical Tomonaga-Luttinger liquid.”

Mr Junxiang Jia, a PhD student in Asst. Prof. Weber’s group and the first author of the study, recalls the difficulty of the experiments. “The scanning tunneling spectroscopy was performed at temperatures of 4.5 K, and we needed to locate features within less than 30 nanometers,” he notes. “In the future, one of our biggest challenges will be to move to even lower temperatures, which are needed to observe parafermions. For that, we require much more advanced equipment.”

The “Coolest” Place for Microscopy Research in Singapore

Asst. Prof. Weber’s group is losing no time exploring this experimental frontier, thanks to the recent completion of his Ultra-Low Vibration Laboratory at NTU. This new facility is specially designed to combine an ultra-low vibration environment with state-of-the-art equipment for scanning tunneling microscopy at lower temperatures than ever achieved before in Singapore.

A scanning tunneling microscope works by bringing an extremely sharp metal tip within a nanometer or less of a material surface. Applying a voltage between the tip and the sample causes electrons to “tunnel” across the gap separating them, and an image is made by measuring variations in the tunneling current as the tip is swept across to the surface. Since the current is exponentially sensitive to the tip-sample separation, the microscope can resolve even the faintest atomic corrugations on the surface, to the point of “imaging” atoms.

As an unwanted side-effect of this sensitivity, physical vibrations in the environment – e.g. caused by people walking, doors closing, elevators running, cars passing, or even distant earthquakes – will limit the accuracy of the measurement.

To mitigate this problem, a new laboratory space was created in the basement level of a building on the NTU campus. The Ultra-low Vibration Laboratory hosts the microscope on a 55 tonne concrete block separate from the rest of the building. The block itself is suspended by air-cushions that actively adjust their displacements in six degrees of freedom, in order to cancel out incoming vibrations.

“If you have been to an optics or photonics research lab, think of an enormous optical table. This works on similar principles, except that it’s really, really heavy,” says Asst. Prof. Weber. “Active vibration cancellation for such extraordinary masses is a very new technology, supplied by BILZ, Germany. It has been deployed to only a handful of facilities worldwide.”

“To detect the floor vibration levels on the block, we brought in some of the most sensitive seismometers on the market. They confirmed that the vibrations levels can compete with the most advanced laboratories in the world,” says Dr Yande Que, a research fellow in Asst. Prof. Weber’s group.

Another limiting factor for scanning tunneling microscopy experiments is the temperature.  The new laboratory hosts the world’s first commercially available scanning tunneling microscope that can operate at milli-Kelvin (mK) temperatures – the USM1600 manufactured by Unisoku, Japan. Less than ten such microscopes have been installed around the globe, and this is the only one in Singapore.

In trial runs, Weber and his team have demonstrated that their microscope can reach effective (“electronic”) temperatures below 150 mK (or -273°C), which should be sufficiently low to detect parafermions.

“Having brought such an ambitious laboratory-building project to a successful completion during the COVID pandemic, working within a constrained budget amid inflation and labor shortage, is a borderline miracle,” says Asst. Prof. Weber. “Kudos to everyone involved, starting from NTU’s infrastructure office and consultants, the construction firm, and ultimately our suppliers of scientific equipment for delivering the highest quality on time.”

The research covered in this article, and the development of the Ultra-Low Vibration Laboratory, were funded by the National Research Foundation (NRF) Singapore, under the Competitive Research Programme “Towards On-Chip Topological Quantum Devices”.

Tuning the many-body interactions in a helical Luttinger liquid