Electricity and data over-the-air: The simultaneous transmission of 5G and power

The potential of Millimeter-wave Wireless Power Transfer as a solution for Massive Internet of Things has finally been harnessed by researchers from Tokyo Tech, who have created a device for simultaneous transmission of power and 5G signal. This transceiver for 5G network signal is fully wirelessly powered and has high power conversion efficiency at large distances and angles. 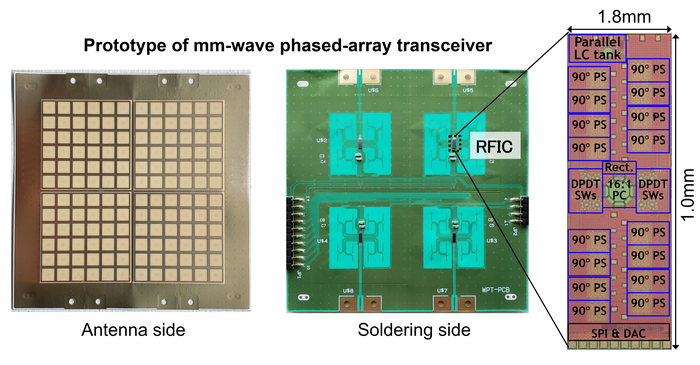 The potential of Millimeter-wave Wireless Power Transfer as a solution for Massive Internet of Things has finally been harnessed by researchers from Tokyo Tech, who have created a device for simultaneous transmission of power and 5G signal. This transceiver for 5G network signal is fully wirelessly powered and has high power conversion efficiency at large distances and angles.

Ever since Nikola Tesla first proposed the idea of wireless transfer of power, there have been multiple efforts to exploit this concept for different applications. A new way to do this is with 5G networks. As 5G networks start coming online, there is an expected associated increase in the scale of the Internet of Things network. With so many devices on the network, there is a growing need to make wirelessly powered devices that can work with 5G signals. The production of such devices has faced the same hurdles that a lot of wirelessly powered devices face—short transmission distances and a fixed direction from which power can be received.

Now, a team of scientists from Tokyo Institute of Technology (Tokyo Tech), led by Associate Professor Atsushi Shirane, have reported the production of a wirelessly powered transmitter-receiver for 5G networks that overcomes both of these problems. Their findings were presented during the 2022 IEEE Symposium on VLSI Technology & Circuits. Dr. Shirane explains, “The millimeter-wave wireless power transfer system is a promising solution for massive Internet of Things, yet it has been hampered by technical problems. We were thus able to make a breakthrough by producing a 5G transceiver with high efficiency at big angles and distances.”

The transmitter-receiver produced by the team is the first of its kind. The device has two modes, a receiving mode, and a transmitting mode. In the receiving mode, the device receives a 5G signal and a millimeter-wave power signal. This power signal activates the device and provides it with power. The device then enters the transmission mode and sends a 5G signal back in the same direction from which it initially received one. Thus, a device like this can easily communicate and be part of the Internet of Things without needing a separate plug point, unlike most current indoor Internet of Things devices. The device can generate power over a wide span of angles and distances and, thus, does not suffer from the challenges faced by previous wirelessly powered devices (see Figure 1 and 2).

Thus, with smaller devices like this, which require very little maintenance and additional infrastructure, the Internet of Things network can be expanded easily and make our world better connected. Dr. Shirane concludes, “This was the world’s first simultaneous reception of power and communication signals with beam steering. We truly believe that technology like this can revolutionize the Internet of Things network and free it from the shackles that bind it today.”

We are looking forward to this vision becoming a reality!

Tokyo Tech stands at the forefront of research and higher education as the leading university for science and technology in Japan. Tokyo Tech researchers excel in fields ranging from materials science to biology, computer science, and physics. Founded in 1881, Tokyo Tech hosts over 10,000 undergraduate and graduate students per year, who develop into scientific leaders and some of the most sought-after engineers in industry. Embodying the Japanese philosophy of “monotsukuri,” meaning “technical ingenuity and innovation,” the Tokyo Tech community strives to contribute to society through high-impact research.