Electric solid propellant — can it take the heat? 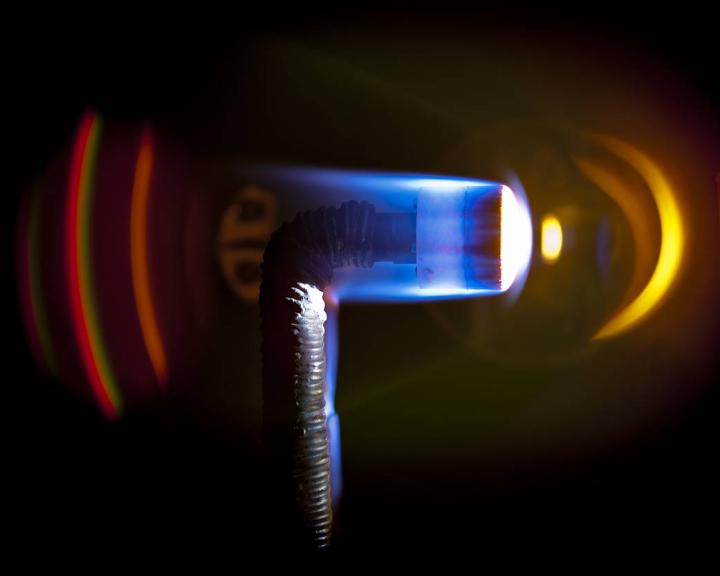 Electric solid propellants are being explored as a safer option for pyrotechnics, mining, and in-space propulsion because they only ignite with an electric current. But because all of these applications require high heat, it’s important to understand how the high temperatures change the propellants’ chemistry. Researchers from the University of Illinois at Urbana-Champaign, Missouri University of Science and Technology, and NASA used a computer model that simulates the thermochemical properties of high temperature materials to predict the thermochemistry of a new high-performance electric solid propellant.

“In ablation pulsed plasma thrusters, there is a high-temperature plasma next to the surface of the electric solid propellant. The heat causes small amounts of the propellant to be removed from or ablate from the surface and become vaporized. This ablated material is then accelerated to high speeds to propel the rocket. However, the high temperature also changes the chemical composition of the material. We didn’t have that chemical composition information until now,” said Joshua Rovey, associate professor in the Department of Aerospace Engineering in The Grainger College of Engineering at the U of I.

At these high temperatures, the chemistry of the solid propellant changes. The conventional Teflon material is made up of two carbons and four fluorines that are bonded to each other. As it ablates, it comes off so hot that the molecules dissociate. The carbons and fluorines detach from each other.

“It’s so hot that electrons come off those atoms,” Rovey said. “Now you have negatively charged electrons moving around and positively charged ions that remain as a fluid. The hot gas is ejected from the thruster at high speeds that generate thrust and propel spacecraft. This work is a numerical model to predict the thermodynamics and equilibrium of this propellant when it vaporizes and is at these high temperatures.”

The research began with a previously developed numerical model for the Teflon material and data to provide a benchmark. After confirming that they simulated the Teflon correctly, the researchers used the same model, but using input conditions of the high-performance electric propellant to predict its conductivity and ionization at the same temperatures as the Teflon.

One primary takeaway from the study is that the high-performance electric propellant has a higher enthalpy–energy stored in the gas–at these extreme temperatures.

“We may have more of what’s called frozen flow losses associated with this material than with the Teflon,” Rovey said. “The high-performance electric propellant stores more energy internally in the gas. For propulsion, we want that energy to go toward accelerating the gas. We don’t want to put a lot of energy into these internal modes. Yes, it makes really hot gas, but we want high-speed gas.

“That’s one of the downsides to using it–storing more energy in these internal modes reduces efficiency. What this research showed is that the reason is fundamentally due to the thermochemistry of the material–the composition of the atoms and molecules in high-performance electric propellant and how they respond to intense heat and high temperatures.”

Rovey said the information from this work can be applied to other solid propellant applications, such as pyrotechnics or in laser ablation.

“Whether it is an ablation-fed pulsed plasma thruster, a laser ablating a surface, or another energy deposition technique, we are simply studying how this material behaves at different temperatures–how its chemical composition changes.”

The study, “Thermodynamic Properties of Hydroxylammonium Nitrate-Based Electric Solid Propellant Plasma,” was written by Matthew S. Glascock at the Missouri University of Science and Technology, Patrick D. Drew and Joshua L. Rovey from the University of Illinois, and Kurt A. Polzin from the NASA Marshall Space Flight Center. It appears in the Journal of Thermophysics and Heat Transfer. https://doi.org/10.2514/1.T5921