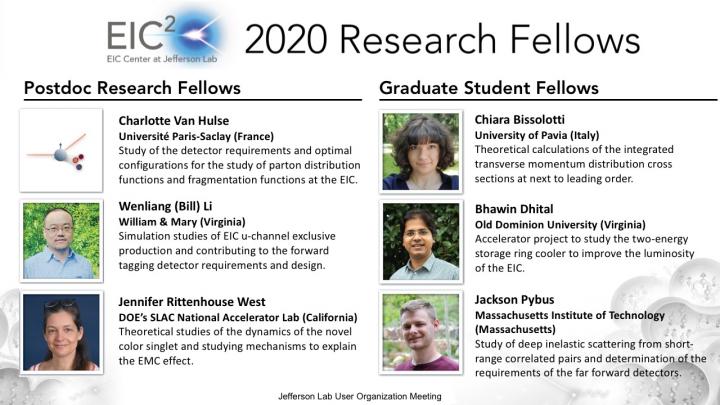 The Electron-Ion Collider Center at the Department of Energy’s Thomas Jefferson National Accelerator Facility (EIC Center at Jefferson Lab) has announced the winners of six international fellowships. The fellows will pursue research over the next year related to advancing the science program of the Electron-Ion Collider (EIC), a one-of-a-kind nuclear physics research facility to be built over the next decade at DOE’s Brookhaven National Laboratory in Upton, New York, in partnership with Jefferson Lab.

To enhance the research goals of this unique collider, the EIC Center at Jefferson Lab awards one-year fellowships to support the efforts of early-career scientists working on advancing the EIC. Funding for the fellowship program is provided by the Commonwealth of Virginia, and fellows must spend at least half of their time during the duration of the fellowship at Jefferson Lab in Newport News, Virginia.

Now in its third year, the program supports early-career researchers who are working on advancing the theory, accelerator design, detector design, experimental design or computing environment in support of the EIC. This year’s awardees are pursuing a wide range of R&D toward realizing the potential of the EIC.