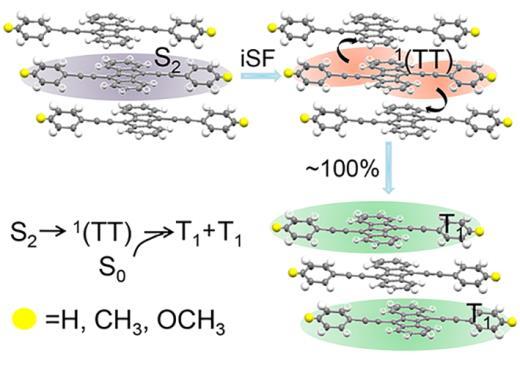 Singlet exciton fission (SF) was considered as an attractive avenue to boost the solar cell efficiencies beyond the Shockley-Queisser limit. In conventional materials, the mechanism of SF is an intermolecular process (named as intermolecular SF, xSF), in which one singlet excited chromophore couples electronically with another ground-state neighbor to form a correlated 1(TT) state (triplet pair). The triplet pair then splits into two independent triplet excited states (T1) at two different molecules.

As a result of the intermolecular nature of the xSF process, its efficiency is significantly influenced by the varied intermolecular electronic coupling degree due to uncontrollable molecular packing and structural order. Intramolecular SF (iSF), in which the essential electronic coupling term can be easily designed and controlled within one molecule, presents a preferable and applicable solution. The disentanglement of the correlated 1(TT) state to produce two long-lived individual triplets is of crucial importance for efficient extraction of excitation energy for photoelectric conversion. However, due to the high binding energy and the confinement of diffusional separation of the two coupled triplets on one molecule, harnessing the triplet energy efficiently via iSF remains a big challenge.

Space-time metasurface makes light reflect only in one direction