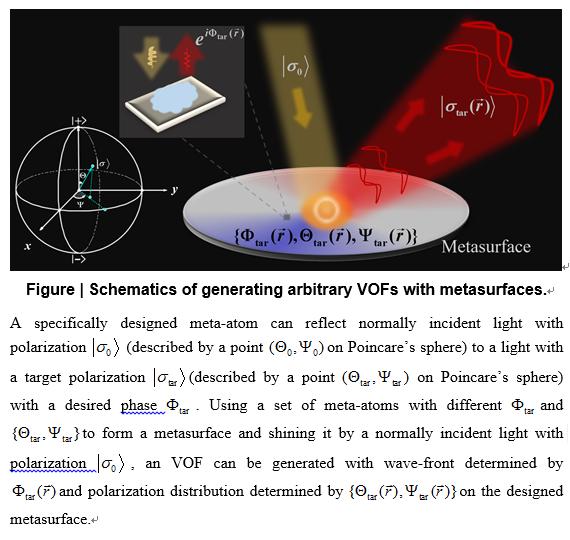 Despite of great advances in applications, generation of such complex VOFs are far from satisfactory. Available methods based on conventional materials suffer from bulky size and low efficiency issues, due to the limited electromagnetic response of natural materials. And recently, metasurfaces have been widely used to generate VOFs in different frequency range, but mostly for far-field generation with certain limited polarization distributions (e.g. radial or azimuthal linear polarizations). In addition, complex VOFs in the near-field with arbitrary polarization distributions are so far rarely generated with metasurfaces.

In a newly published paper in Light: Science & Application, Prof. Lei Zhou’s group from Physics Department of Fudan University in China, proposed a generic approach to efficiently generate arbitrary VOFs based on metasurfaces exhibiting full-matrix yet inhomogeneous Jones-matrix distributions. To illustrate the feasibility and powerfulness of their strategy, they elucidated their concept based on model-level analytical calculations, and experimentally demonstrated a meta-device as a benchmark that can simultaneously deflect light and manipulate its polarization in controllable manner. Then, they further experimentally demonstrate the generations of far-field VOFs exhibiting a vortex wave front with an inhomogeneous polarization distribution and the generation of a near-field VOF with specially designed wave front and polarization distributions and even orbital angular momentum, i.e. a cylindrically polarized vortex surface plasmon wave. The excellent performance of realized meta-devices and the good agreement among the experimental results in NIR regime, the simulations and analytical calculations well validated their approach, making such meta-platform as an alternative avenue to generate complex VOFs. These scientists summarize their VOF generation platform:

“…we establish a generic strategy for designing ultra-thin meta-devices to efficiently generate arbitrary VOFs (including both far-field and near-field ones) as desired, and experimentally demonstrate the concept in the near-infrared (NIR) regime. The key idea is to assume the meta-device to exhibit an inhomogeneous full-matrix Jones matrix, thus possessing the control capabilities on both local spin and global wave-front of a light beam.”

“…the strategy proposed is so generic that we can design VOF-generation meta-devices working for impinging lights with arbitrary incident angles and polarizations in both reflection and transmission geometries.” They added.

“In summary, by exploiting the full degrees of freedoms provided by full-matrix inhomogeneous Jones matrix, we establish a general strategy to realize meta-devices to generate VOFs both in the near- and far-field, with any designed wave fronts and local polarization distributions. After illustrating our generic concept by both model-level analytical calculations and benchmark experiments on an anomalously-reflecting half-wave plate, we demonstrate the full capabilities of our approach by experimentally realizing two meta-devices…Our results offer a systematic approach to design ultra-compact optical devices to generate arbitrary VOFs under general conditions in different frequency domains, which are of great importance in both fundamental researches and photonic applications. Many future works can be expected along this line, such as extending the concept to transmission geometry, off-normal incidences, inhomogeneous amplitudes and arbitrary incident polarizations, and applying the generated VOFs to multi-channel communications, near-field sensing, optical trapping, and super-resolution imaging.” the scientists forecast.