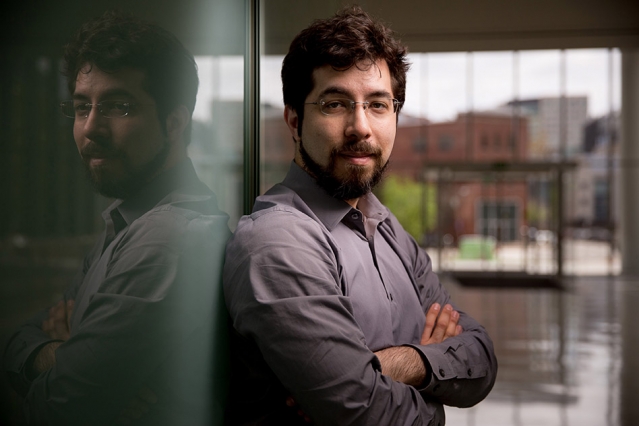 Edward S. Boyden, a professor of media arts and sciences, biological engineering, and brain and cognitive sciences at MIT, has won the BBVA Foundation Frontiers of Knowledge Award in Biomedicine for his role in the development of optogenetics, a technique for controlling brain activity with light. Gero Miesenböck of the Oxford University and Karl Deisseroth of Stanford University were also honored with the prize for their role in developing and refining the technique.
The BBVA Foundation Frontiers of Knowledge Awards are given annually for “outstanding contributions and radical advances in a broad range of scientific, technological, and artistic areas.” The 400,000-Euro prize in the category of biomedicine will be shared among the three neuroscientists.
“If we imagine the brain as a computer, optogenetics is a keyboard that allows us to send extremely precise commands,” says Boyden, a faculty member at the MIT Media Lab with a joint appointment at MIT’s McGovern Institute for Brain Research. “It is a tool whereby we can control the brain with exquisite precision.”
Boyden joins an illustrious list of prize laureates including physicist Stephen Hawking and artificial intelligence pioneer Marvin Minsky of MIT, who died on Jan. 24.
The BBVA Foundation will host the winners at an awards ceremony on June 21 at the foundation’s headquarters in Madrid, Spain.
The BBVA Foundation promotes, funds, and disseminates world-class scientific research and artistic creation, in the conviction that science, culture and knowledge hold the key to better opportunities for all world citizens. The Foundation designs and implements its programs in partnership with some of the leading scientific and cultural organizations in Spain and abroad, striving to identify and prioritize those projects with the power to significantly advance the frontiers of the known world.
The juries in each of eight categories are made up of leading international experts in their respective fields, who arrive at their decisions in a wholly independent manner, applying internationally recognized metrics of excellence. The BBVA Foundation is aided in the organization of the awards by the Spanish National Research Council (CSIC).