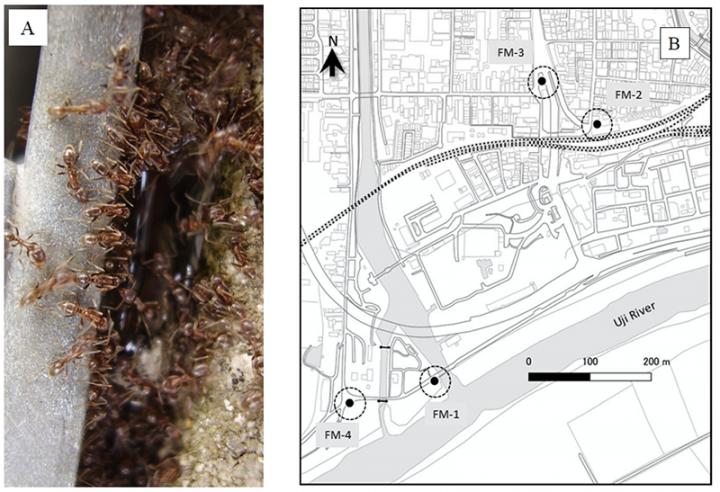 Researchers have successfully detected the environmental DNA (eDNA *1) of the Argentine ant (*2) in surface soil samples from sites on Kobe’s Port Island and in Kyoto’s Fushimi District, two areas that have a long history of destruction caused by this invasive species. The research group included then graduate student YASASHIMOTO Tetsu and Associate Professor MINAMOTO Toshifumi of Kobe University’s Graduate School of Human Development and Environment, Visiting Professor OZAKI Mamiko of the Graduate School of Engineering, and NAKAJIMA Satoko, formally of the Kyoto Prefectural Institute of Public Health and Environment.

This method can be used to enable scientists to easily gain an accurate understanding of the habitat distribution and hotspots for globally invasive ant species (*3), such as the fire ant, which cause significant damage. Combining this method with pest control plans against invasive ant species will contribute towards the formulation of targeted measures and successful elimination results.

These research results are due to be published in Scientific Reports on May 26, 2021.

In the midst of globalization, the transport of goods and commodities between nations is increasing. Consequently, the arrival, subsequent establishment and widespread proliferation of invasive ant species that are inadvertently transported to other countries has developed into a worldwide problem. In Japan, Argentine ant (Figure 1A) colonies continue to proliferate widely, and the invasion and establishment of highly poisonous fire ant populations have also been reported.

The research group chose two areas that have a long history of damage caused by the Argentine ant; 1. Kyoto’s Fushimi district and 2. Kobe’s Port Island. 1. Fushimi has continuously used insecticide measures for almost 10 years, and has had consistent success in suppressing Argentine ant populations in built-up areas. 2. Although the Argentine ant first invaded Kobe over 20 years ago, the situation has yet to change for the better.

In cases like 1, where insecticide-based methods have been carried out for a long period of time, it is difficult to stop the usage of insecticide on a non-scientific basis, even though this presents a problem from the perspective of conserving the natural environment and ecosystem.

In cases like 2, there are no pest control plans in place because the extent of the species’ distribution is not readily understood.

Environmental DNA analysis is a biological monitoring method that was introduced into the fields of ecology and conservation biology around 2008. It has brought about revolutionary changes in the conduction of biological surveys, especially in aquatic environments. It is hoped that applying this technique to surface soil samples instead of water samples will play a key role in eliminating invasive ants, providing a breakthrough solution to this problem.

The researchers designed a real-time PCR assay specific to the Argentine ant and experimentally confirmed the specificity of the assay. The researchers then performed the following experiments using this method.

Surface samples were collected from a total of four sites (FM-1 to 4) in the Fushimi district of Kyoto in order to test them for the eDNA of the Argentine ant, as shown in Figure 1B. The characteristics of efforts to control invasive ant species over the past decade are different for each site (Figure 2).

Environmental DNA from the Argentine ant was found in the samples from the FM-1 and FM-2 sites, where their presence had previously been confirmed by traditional bait trap surveys. However, eDNA from this invasive species was not detected in the samples taken from sites FM-3 and FM-4. These results did not contradict those obtained using the bait trap method, suggesting that eDNA analysis can be considered more accurate than surveys based on visual observations (Table 1). In addition, native ant species were observed at each of the survey sites. At sites FM-1 and 2, where Argentine ant eDNA was detected, 7 and 3 native species were observed, whereas at sites FM-3 and 4, where the invasive ant’s DNA was not detected, 15 and 10 native species were found respectively. This indicates that the invasive species may be driving out native ant species.

1. By comparing and analyzing the results of environmental DNA analysis of various ant species with the habitat data of Argentine ant and native ant species accumulated over the years, a method for estimating ant habitat by environmental DNA can be developed for practical use. In this way, eDNA could provide a scientific basis from which to reconsider previous ineffective pest control methods and to eradicate issues relating to the continuance of pest control and confirming extermination.

2. The environmental DNA method is a fundamental, all-purpose technique, which enables further research into other invasive ant species, such as fire ants, to be conducted in the same way.

3. A policy model for the control of invasive species, based on the Sustainable Development Goal (SDG) to ‘Conserve and restore terrestrial ecosystems and halt biodiversity loss’, can be drawn up and implemented, beginning with invasive ant species (including Argentine ant and fire ant).

*1 Environmental DNA (eDNA): This is DNA originating from organisms that is found in the environment, such as in the water or on the ground. Environmental DNA analysis allows researchers to comprehensively identify species that reside in an area, even if they no longer live there. This in turn enables them to estimate and gain an understanding of the target species’ distribution. Environmental DNA surveys are used in a wide range of research fields, including species conservation, ecology, taxonomy, microbiology and palaeontology.

*2 Argentine ant (Linepithema humile): The Argentine ant is part of the Dolichoderinae subfamily and belongs to the Hymenoptera order. It originated in South America. The IUCN (International Union for Conservation of Nature and Natural Resources) ranks it as one of the world’s worst 100 invasive species. It is also designated as one of Japan’s worst 100 invasive species. It was first found in Japan in 1993 in Hatsukaichi City (Hiroshima Prefecture) and has since been reported in 11 prefectures. It is a very difficult species to eradicate once it has invaded an area, as the ant establish supercolonies with multiple queens.

*3 Invasive ant species: These species have spread beyond their country of origin and have established themselves in countries worldwide. They invade native species’ habitats, as well as the dwellings of people and livestock; posing a threat to living environments, in addition to health and safety. These invasive ant species drive out and eradicate the former occupants of an area, which leads to a loss of biodiversity and ecosystem destruction.