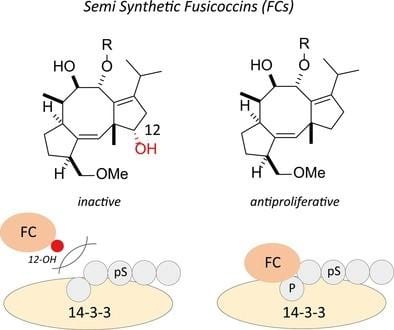 Researchers at Shinshu University in Japan have discovered that editing the chemical properties of fusicoccins, a kind of toxic organic compound produced by fungus to blight plants, can transform them into chemicals with anti-tumor properties in cells.

The results of the study are published in Chemistry – A European Journal in September of 2018.

While fusicoccins are known to be involved in several activities in the mammalian cell, their exact mechanisms have not been well understood. In plants, fusicoccins structurally bind to a specific type of protein, called 14-3-3 proteins. In mammals, the same 14-3-3 proteins are responsible for regulating several cellular processes including cell growth and death, differentiation and aging.

In this context, the authors specifically looked at the effect of a model fusicoccin on the binding between 14-3-3 proteins and their partner molecules in a process of forming larger functional complexes. The researchers have demonstrated that a key chemical change in the structure of a fusicoccin not only affects the binding behavior between a 14-3-3 protein and its partner molecule during complex formation (also referred to as protein-protein interaction, PPI), but this change also turned the fusicoccin into a toxic substance with the ability to destroy cells, the latter being of particular relevance in cancer cells.

“What is most intriguing to us is that the simple structural change of the fusicoccin, which otherwise does not possess any toxicity in human cells, can lead to anti-cancer agents,” says Junko Ohkanda, Ph.D., corresponding author of the research paper and Professor at the Institute of Agriculture, Shinshu University. “Our study suggests that the compound works as a stabilizer for protein-protein interactions. Only few examples of this are known so far.”

The authors first synthesized two model fusicoccins, one with a critical hydroxyl group, or a region that contains a hydrogen molecule that is bound to an oxygen molecule, and one without a hydroxyl group. This was done via a series of chemical reactions. In order to be able to observe a fusicoccin’s effect on the protein-protein interactions, the researchers used fluorescence labelling. That allowed them to differentiate when a protein bound to a specific kind of synthetic fusicoccin and to understand protein structural effects of the presence or absence of the hydroxyl group.

Even though compounds that regulate interactions between proteins have emerged as new promising drug targets in the post-genome era and have received much attention over the last two decades, developing a synthetic molecule that has that function remains challenging. “We are hoping to be able to develop a new clinically relevant anti-cancer agent based on fusicoccins, which selectively control protein-protein interactions that are critical for cell survival,” says Professor Ohkanda.

According Ohkanda, the research team believes that “fusicoccins provide a new molecular basis for development of both antitumor drugs and the PPI-inducers, which are highly desirable for further understanding of cellular biology.” In their future research, the authors aim to focus on shedding light on the mechanisms of action. As such, they are already focusing on identification of the cellular targets.

Shinshu University is a national university in Japan founded in 1949 and working on providing solutions for building a sustainable society through interdisciplinary research fields: material science (carbon, fiber, composites), biomedical science (for intractable diseases, preventive medicine), and mountain science. We aim to boost research and innovation capability through collaborative projects with distinguished researchers from the world. For more information, please see: http://www.shinshu-u.ac.jp/english/

Farmers will benefit from a new method of monitoring pasture nutrients

Much shorter radiation treatment found to be safe, effective for people with soft…

Native Americans did not make large-scale changes to environment prior…