A new study led by scientists at the American Museum of Natural History is the first to compare the inner ear structures of the two major groups of bats, revealing that anatomic differences influenced their evolution. The research shows how variations in the bony canal that makes up part of the inner ear affect the nerves that transmit sound to the brain, which ultimately paved the way for diverse forms of echolocation and foraging to develop within each lineage. The study is published today in the journal Nature. 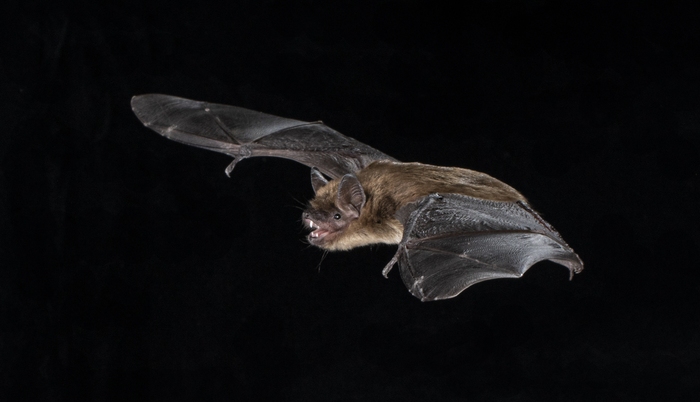 A new study led by scientists at the American Museum of Natural History is the first to compare the inner ear structures of the two major groups of bats, revealing that anatomic differences influenced their evolution. The research shows how variations in the bony canal that makes up part of the inner ear affect the nerves that transmit sound to the brain, which ultimately paved the way for diverse forms of echolocation and foraging to develop within each lineage. The study is published today in the journal Nature.

“There seems to be this fundamental shift in the way the ear is built that’s pretty significant for distinguishing between these groups of bats and understanding their different evolutionary histories,” said Ben Sulser, a graduate student in the Richard Gilder Graduate School at the Museum and lead author of the study.

All living bats fall into one of two lineages: the Yangochiropterans, or yang bats—which include 80 percent of all echolocating bat species—and the Yinpterochiropterans, or yin bats. They are genetically distinct, but species within each group do not have many physical traits in common. Before this genetic data became available 20 years ago, bats had been classified into two different groups based on their appearance. Larger, fruit-eating bats were placed in their own category separate from smaller bats that mostly eat insects.

“It’s become clear that genetic analysis is the best way for us to reconstruct the evolutionary history of these bats, but we had such a clear genetic signal that there were two groups, we thought there had to be some physical traits that aligned with this striking genetic split,” said Bruce Patterson, the MacArthur Curator of Mammals at the Field Museum and co-author of the study.

Sulser began investigating the bat inner ear as an undergraduate at the University of Chicago. While studying the anatomy of this region, he realized that some bats lack a bony canal found in all other mammals that carries nerves between the ears and the brain. The canal, known as Rosenthal’s canal, is usually a solid wall of bone with microscopic holes through which the nerves travel, similar to a coffee filter. “We thought this structure might be variable—we didn’t expect it to be gone,” he said.

To get a more complete picture, Sulser and his colleagues took CT scans of 39 bat species. The team recorded the types of inner ear variations they found and mapped them onto the bat evolutionary tree to determine when the absence of the canal evolved and whether it was associated with other traits.

They found that that the absence of Rosenthal’s canal is unique to Yangochiropterans, though some do retain it. When yang bats do have it, however, the canal had much wider holes in the canal wall than those seen in yin bats—more like a pasta strainer than a coffee filter. The team then looked at the soft tissue and found that several yang bats had more nerves packed into this region than yin bats.

“The yang bats have a lot of variety in behavior, habitats, and diets, and this is matched by a similar variety in the ear itself in terms of the canal wall and the number of nerve bodies inside,” said Sulser. “These yang bats have a flexible toolkit that may have allowed them to evolve into new echolocation niches.”

“These are different ways of achieving the same goal,” said senior author Zhe-Xi Luo. “It’s like these two types of bats are speaking different dialects of a language.”

Sulser says that understanding variation in the inner ears of bats is important not only for understanding how they have evolved, but also to understand our own anatomy. “We have the same toolkit for hearing that bats do, and we now know another way in which that toolkit can be different. We’re still learning new things all the time about structures that are in our own bodies.”

The American Museum of Natural History, founded in 1869, is one of the world’s preeminent scientific, educational, and cultural institutions. The Museum encompasses more than 40 permanent exhibition halls, including those in the Rose Center for Earth and Space, and the Hayden Planetarium, as well as galleries for temporary exhibitions. The Museum’s scientists draw on a world-class permanent collection of more than 34 million specimens and artifacts, some of which are billions of years old, and on one of the largest natural history libraries in the world. Through its Richard Gilder Graduate School, the Museum grants the Ph.D. degree in Comparative Biology and the Master of Arts in Teaching (MAT) degree, the only such freestanding, degree-granting program at any museum in the United States. The Museum’s website, digital videos, and apps for mobile devices bring its collections, exhibitions, and educational programs to millions around the world. Visit amnh.org for more information.