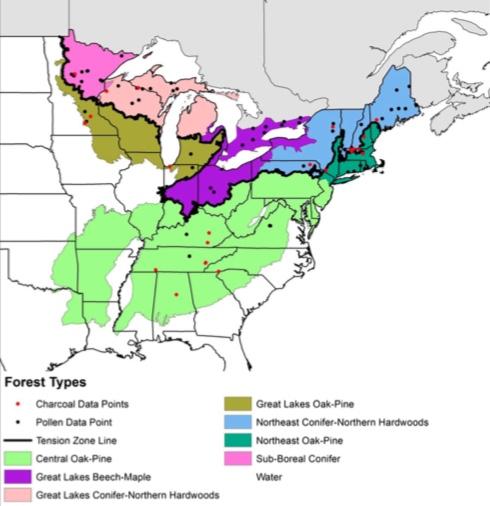 Native Americans’ use of fire to manage vegetation in what is now the Eastern United States was more profound than previously believed, according to a Penn State researcher who determined that forest composition change in the region was caused more by land use than climate change.

“I believe Native Americans were excellent vegetation managers and we can learn a lot from them about how to best manage forests of the U.S.,” said Marc Abrams, professor of forest ecology and physiology in the College of Agricultural Sciences. “Native Americans knew that to regenerate plant species that they wanted for food, and to feed game animals they relied on, they needed to burn the forest understory regularly.”

Over the last 2,000 years at least, according to Abrams — who for three decades has been studying past and present qualities of eastern U.S. forests — frequent and widespread human-caused fire resulted in the predominance of fire-adapted tree species. And in the time since burning has been curtailed, forests are changing, with species such as oak, hickory and pine losing ground.

“The debate about whether forest composition has been largely determined by land use or climate continues, but a new study strongly suggests anthropogenic fire has been the major driver of forest change in the East,” said Abrams. “That is important to know because climate change is taking on an ever larger proportion of scientific endeavor.”

But this phenomenon does not apply to other regions, Abrams noted. In the western U.S., for example, climate change has been much more pronounced than in the East. That region has received much more warming and much more drought, he explained.

“Here in the East, we have had a slight increase in precipitation that has ameliorated the warming,” said Abrams.

To learn the drivers of forest change, researchers used a novel approach, analyzing both pollen and charcoal fossil records along with tree-census studies to compare historic and modern tree composition in the forests of eastern North America. They looked at seven forest types in the north and central regions of the eastern United States. Those forest types encompass two distinct floristic zones — conifer-northern hardwood and sub-boreal to the north, and oak-pine to the south.

The researchers found that in the northernmost forests, present-day pollen and tree-survey data revealed significant declines in beech, pine, hemlock and larches, and increases in maple, poplar, ash, oak and fir. In forests to the south, both witness tree and pollen records pointed to historic oak and pine domination, with declines in oak and chestnut and increases in maple and birch, based on present-day data.

“Modern forests are dominated by tree species that are increasingly cool-adapted, shade-tolerant, drought-intolerant pyrophobes — trees that are reduced when exposed to repeated forest burning,” Abrams said. “Species such as oak are largely promoted by low-to moderate-level forest fires. Furthermore, this change in forest composition is making eastern forests more vulnerable to future fire and drought.”

Researchers also included human population data for the region, going back 2,000 years, to bolster their findings, which recently were published in the Annals of Forest Science. After hundreds of years of fairly stable levels of fire caused by relatively low numbers of Native Americans in the region, they report, the most significant escalation in burning followed the dramatic increase in human population associated with European settlement prior to the early 20th century. Moreover, it appears that low numbers of Native Americans were capable of burning large areas of the eastern U.S. and did so repeatedly.

After 1940, they found, fire suppression was an ecologically transformative event in all forests.

“Our analysis identifies multiple instances in which fire and vegetation changes were likely driven by shifts in human population and land use beyond those expected from climate alone,” Abrams said. “After Smokey Bear came on the scene, fire was mostly shut down throughout the U.S. and we have been paying a big price for that in terms of forest change. We went from a moderate amount of fire to too much fire to near zero fire — and we need to get back to that middle ground in terms of our vegetation management.”

Also involved in the research was Gregory J. Nowacki, with the Eastern Regional Office, U.S. Department of Agriculture Forest Service.
The Agricultural Experiment Station of Penn State funded this research.

Neanderthals: Pioneers in the use of marine resources

Scienmag May 23, 2019
Joint research carried out by the Universities of Konstanz, Stuttgart, Ulm and LMU Munich on the topic of…