A new study from scientists at the University of Miami (UM) Rosenstiel School of Marine, Atmospheric, and Earth Science suggests that the pattern of temperature change of the world’s oceans may not be an indication of an impending abrupt climate change event as depicted in the movie “The Day After Tomorrow.” 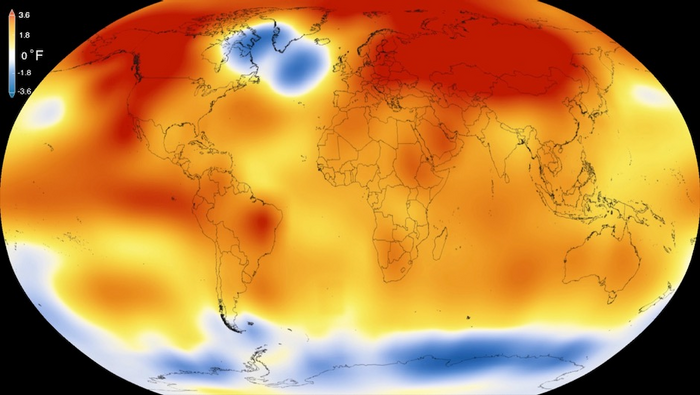 A new study from scientists at the University of Miami (UM) Rosenstiel School of Marine, Atmospheric, and Earth Science suggests that the pattern of temperature change of the world’s oceans may not be an indication of an impending abrupt climate change event as depicted in the movie “The Day After Tomorrow.”

The UM Rosenstiel School researchers used a state-of-the-art climate model to investigate a pattern of temperature change in a swath of water in the subpolar North Atlantic region, called a warming hole, that has been cooling over the past century. Scientists have considered this cooling a result of a slowdown of a planetary-scale ocean circulation, called the Atlantic meridional overturning circulation (AMOC), that transports energy to the North Atlantic.

“However, our study shows the warming hole during the past century is unlikely due to a slowdown of the AMOC. Instead, the warming hole is actually a consequence of human driven changes in the atmosphere” said Chengfei He, a postdoctoral researcher in the Department of Atmospheric Sciences at the Rosenstiel School. “Our finding suggest that this warming hole will not result in an abrupt climate change event lethal to humans as depicted in Hollywood movies.”

Geological records, such as the ice core in Greenland, have revealed that most abrupt climate changes in Earth’s past were the result of a slowdown in the AMOC. “The warming hole is believed as a fingerprint of the AMOC in present day. Its appearance suggests the AMOC may not be stable. Our results do not support this idea,” said Amy Clement, a professor in the Department of Atmospheric Sciences at the Rosenstiel School, and a co-author of the study.

The climate model used by the researchers was a digital Earth that can reproduce past climate changes and predict future climate change. To conduct this study, He and his coauthors configured the model with a motionless ocean to examine how the North Atlantic temperature responds to the atmosphere change due to the greenhouse gas and aerosol emissions. Since the ocean has no circulation, any change in the ocean surface temperature relies on the atmospheric condition overhead.

Under global warming, the atmospheric westerlies shift northward and enhance the local wind over subpolar North Atlantic and result in the warming hole.

About the University of Miami

The University of Miami is a private research university and academic health system with a distinct geographic capacity to connect institutions, individuals, and ideas across the hemisphere and around the world. The University’s vibrant and diverse academic community comprises 12 schools and colleges serving more than 17,000 undergraduate and graduate students in more than 180 majors and programs. Located within one of the most dynamic and multicultural cities in the world, the University is building new bridges across geographic, cultural, and intellectual borders, bringing a passion for scholarly excellence, a spirit of innovation, a respect for including and elevating diverse voices, and a commitment to tackling the challenges facing our world. Founded in the 1940’s, the Rosenstiel School of Marine, Atmospheric, and Earth Science has grown into one of the world’s premier marine, atmospheric and earth research institutions. Offering dynamic interdisciplinary academics, the Rosenstiel School is dedicated to helping communities to better understand the planet, participating in the establishment of environmental policies, and aiding in the improvement of society and quality of life. www.earth.miami.edu.