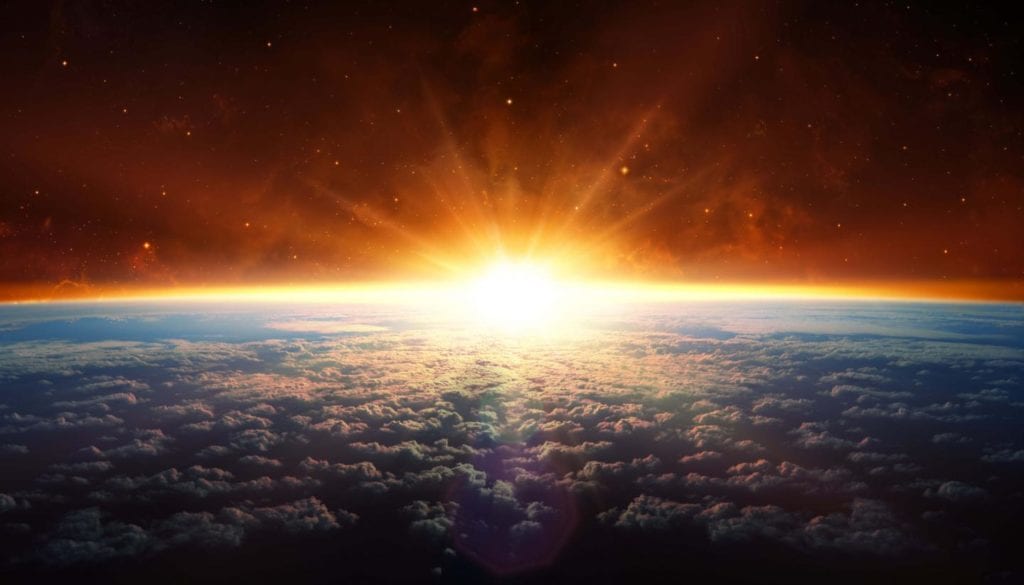 TROY, N.Y. — The evolution of planet Earth and the emergence of life during its first half-billion years are inextricably linked, with a series of planetwide transformations – formation of the ocean, evolution of the atmosphere, and the growth of crust and continents – underpinning the environmental stepping stones to life. But how, and in what order, were the ingredients for life on Earth manufactured and assembled?

NASA’s Astrobiology Program has awarded a $9 million grant to tackle the question through the Earth First Origins project, led by Rensselaer Polytechnic Institute Assistant Professor Karyn Rogers. The five-year project seeks to uncover the conditions on early Earth that gave rise to life by identifying, replicating, and exploring how prebiotic molecules and chemical pathways could have formed under realistic early Earth conditions.

“Planet Earth and the chemistry of life share the same road,” said Rogers. “Because of that co-evolution, we can use our understanding of the fundamental planetary processes that set the Earth system in motion to sketch the physical, chemical, and environmental map to life.”

You can watch Rogers talk about this research here.

Earth First Origins serves as the catalyst for launching the Rensselaer Astrobiology Research and Education (RARE) Center. The newly established RARE Center builds on the expertise established through more than three decades of astrobiology research at Rensselaer, and supersedes its predecessor, the New York Center for Astrobiology. In addition to conducting fundamental research into life’s origins and the potential for life throughout the universe, the RARE Center will support a range of education and public engagement activities. These include a seminar series, a curricular minor in astrobiology, the upcoming Gateway to Early Earth Summer School, and a core undergraduate and graduate education program.

“Rensselaer has an extensive history of significant contributions to the field of astrobiology, and the Earth First Origins project and the Rensselaer Astrobiology Research and Education Center will be tremendous additions to our legacy of discovery,” said Rensselaer President Shirley Ann Jackson. “The interdisciplinary global collaboration involved in these initiatives epitomizes the visionary work we engage in as The New Polytechnic.”

Earth First Origins and the RARE Center unite a diverse team of experts in planetary evolution, early Earth geochemistry, prebiotic and experimental astrobiology, and analytical chemistry. Complemented by a team of molecular biologists, geochemical modelers, and data and visualization experts, the research team brings a wealth of experience poised to launch a new research paradigm for studying life’s origins.

“Various types of environments existed on early Earth and many of them could have been the starting place of life, or life could have emerged via processes that connected several environmental niches,” said Rogers. “We want to establish the range of possible conditions in different early Earth environments, replicate them in the lab, and understand the particular factors that contribute to the sequence of chemical syntheses that lead to life.”

The Earth First Origins project will establish the Gateway to Early Earth, which consists of both a physical lab space and a virtual environment, the early Earth Lab (eEL) and the Virtual early Earth Portal (VeEP), both housed at Rensselaer. The Gateway will be a resource for the Earth First Origins team, as well as the larger origins of life community, to access realistic early Earth environments, both experimentally and through models, and explore their potential to give rise to life’s chemistry.

The early Earth Laboratory will house a suite of experimental equipment used to replicate early Earth environments. The eEL will not only target the temperature, pressure, and geochemical conditions of the early Earth, but will also employ novel experimental techniques to represent the dynamic connections between different systems.

“Early Earth hosted a wide range of distinct environments. By accurately representing water-rock-atmosphere interactions, or the flow and mixing of fluids along thermal and chemical gradients, the eEL will provide a much better way of exploring the chemical pathways that emerged during Earth’s earliest times.” said Bruce Watson, co-investigator and a geochemist and Institute Professor at Rensselaer.

The VeEP provides applications and tools for integrating geochemical and geophysical models, and applying data visualization techniques to explore the range of possibilities in various early Earth environments. Additionally, the VeEP will allow researchers to record data from experiments, models, and analyses in “virtual notebooks” that are ingested into a larger structured data warehouse and accessed through the portal.

In addition to Rogers and Watson, the core faculty of the RARE Center also includes:

The Earth First Origins team also includes co-investigators from across the country:

The five-year project, titled “Reconciling Prebiotic Paradigms: Mapping Planetary Reality onto Experimental Strategies” is funded through NASA’s Astrobiology Program and is part of the new Prebiotic Chemistry and Early Earth Environments (PCE3) Consortium, also announced this week. PCE3 is a consortium of researchers investigating the delivery or synthesis of small molecules, their survival under the conditions of the early Earth, and the subsequent formation of proto-biological molecules and the pathways that lead to systems harboring the potential for life. Rogers will serve as one of the initiatives’ co-leads, along with Ram Krishnamurthy of the Scripps Research Institute, Loren Williams of Georgia Institute of Technology, and Timothy Lyons of the University of California, Riverside.

A trick for taming terahertz transmissions

Discovery may lead to precision-based strategy for triple negative…