New research on a vast fossil site in Patagonia shows that some of the earliest dinosaurs lived in herds and suggests that this behaviour may have been one of the keys to the success of dinosaurs. The discovery, at the ESRF, of embryos of the same species inside fossilized eggs contributed to the results. The findings are published today in the journal Scientific Reports. 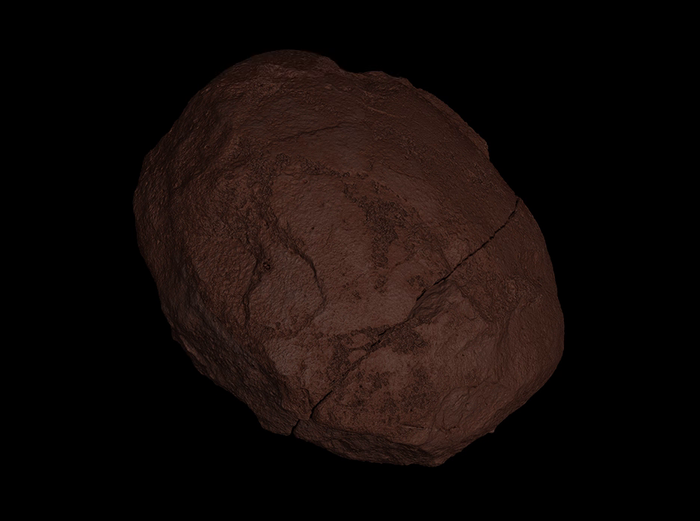 New research on a vast fossil site in Patagonia shows that some of the earliest dinosaurs lived in herds and suggests that this behaviour may have been one of the keys to the success of dinosaurs. The discovery, at the ESRF, of embryos of the same species inside fossilized eggs contributed to the results. The findings are published today in the journal Scientific Reports.

In the past, studies have shown that some dinosaurs that existed in the latest stage of the dinosaur Era (the Cretaceous Period) lived in herds. However, a major pending question was when and how this behaviour appeared in their evolutionary history.

In the early 2000s, an international team of scientists found a 190-million-year-old dinosaur nesting ground, which also contained juvenile skeletons belonging to Mussaurus patagonicus, a primitive, herbivorous sauropodomorph dinosaur (forerunner of the large, long-necked dinosaurs)  in Patagonia (Argentina). “Such a preserved site was bound to provide us with a lot of information about how early dinosaurs lived”, explained Diego Pol, the paleontologist at CONICET and who discovered the site.

One of the elements that could shed light on how early dinosaurs lived was the eggs found on the site and Pol wanted to find out whether they were laid by Mussaurus or not. “It is hard to find fossil eggs, and even more to find fossil eggs with embryos inside, as you need very special conditions for their fossilization”, explains Pol. The ESRF, the European Synchrotron, is the perfect tool to research this kind of samples: “We use high-energy X-rays to penetrate in the sample without destroying it and get a full view inside it”, said Vincent Fernandez, paleontologist at the London Natural History Museum and former ESRF scientist.

After a complex journey from Argentina (it is not every day that someone takes dinosaur eggs as carry-on luggage between continents), Pol came to the ESRF with 30 out of the more than 100 eggs found on the site, to scrutinize them with powerful X-rays. “We spend 4 days scanning the eggs around the clock,” explained Fernandez, “it was tiring, but the exciting results were morale-boosting”. High-resolution computed tomography revealed fossilized embryos of Mussaurus within some of the eggs and showed all these fossils belong to a communal breeding site of a single dinosaur species.

The researchers, in parallel, studied the site itself. The fossils were found in multiple rock horizons at the same locality, indicating that Mussaurus came back to the same spot during successive seasons to form breeding colonies. Based on the sediments, the scientists were able to infer that the nesting ground was located on the dry margins of a lake.

A key aspect of this locality is that dinosaur skeletons were not randomly scattered throughout the fossil site, but instead they were grouped according to their age. Dinosaur babies’ fossils were located near the nests. One-year old youngsters were found closely associated with each other, including a cluster of 11 skeletons in resting pose, suggesting that Mussaurus formed schools of young individuals. Adults and sub adults were frequently associated in pairs or alone but all within one square kilometer area. To determine the age of the juvenile fossils, scientists carried out histological studies, i.e. cutting a thin slice of bone and observing the bone tissue under a microscope. “The bones of these dinosaurs grew in annual cycles, much as the tree rings, so by counting the growth cycles we could infer the age of the dinosaur”, adds Pol.

All the findings show a well-organized herd structure and it is the first record of this kind of complex social behaviour in an early dinosaur (it pre-dates other records of dinosaurs with evolved social behaviour by more than 40 million years). The scientists compared these results with other fossil egg sites in South Africa and China and suggested that social behaviour can be traced back to the time of dinosaur origins. “These are not the oldest dinosaurs, but they are the oldest dinosaurs for which a herd behaviour has been proposed. Mussaurus belongs to the first successful family of herbivorous dinosaurs, so we postulate that being social and protecting their young together as a herd may have been part of the reason these long-necked dinosaurs were so common in all continents”, concludes Pol.

Title: Earliest evidence of herd‐living and age segregation amongst dinosaurs

Earliest evidence of herd-living and age segregation amongst dinosaurs