WASHINGTON — A handful of ancient zircon crystals found in South Africa hold the oldest evidence of subduction, a key element of plate tectonics, according to a new study published today in AGU Advances, AGU’s journal for high-impact, open-access research and commentary across the Earth and space sciences. 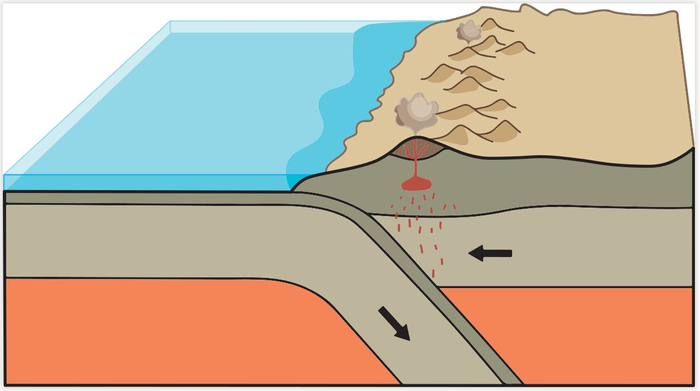 WASHINGTON — A handful of ancient zircon crystals found in South Africa hold the oldest evidence of subduction, a key element of plate tectonics, according to a new study published today in AGU Advances, AGU’s journal for high-impact, open-access research and commentary across the Earth and space sciences.

These rare time capsules from Earth’s youth point to a transition around 3.8 billion years ago from a long-lived, stable rock surface to the active processes that shape our planet today, providing a new clue in a hot debate about when plate tectonics was set in motion.

Earth’s crust and the top layer of mantle just under it are broken up into rigid plates that move slowly on top of viscous but mobile lower layers of mantle rock. Heat from Earth’s core drives this slow but inexorable motion, responsible for volcanoes, earthquakes, and the uplift of mountain ranges.

Estimates for when this process revved up and modern crust formed range from over 4 billion years ago to just 800 million years ago. Uncertainty arises because the geologic record from Earth’s youth is sparse, due to the surface recycling effect of plate tectonics itself. Almost nothing remains from the Hadean Eon, Earth’s first 500 million years.

“The Hadean Earth is this big mystery box,” said Nadja Drabon, a geologist at Harvard University and the lead author of the new study.

In an exciting step forward in solving this mystery, in 2018 Drabon and her colleagues unearthed a chronological series of 33 microscopic zircon crystals from a rare, ancient block of crust in the Barberton Greenstone Belt in South Africa, that formed at different times over a critical 800-million-year span from 4.15 to 3.3 billion years ago.

Zircon is a relatively common accessory mineral in Earth’s crust, but ancient representatives from the Hadean Eon, 4 to 4.56 billion years ago, are exceedingly rare, found in only 12 places on Earth, and usually in numbers fewer than three at each location.

Hafnium isotopes and trace elements preserved in the Greenstone Belt zircons told a story about the conditions on Earth at the time they crystalized. Zircons 3.8-billion-years-old and younger appeared to have formed in rock experiencing pressures and melting similar to modern subduction zones, suggesting the crust may have started moving.

“When I say plate tectonics, I’m specifically referring to an arc setting, when one plate goes under another and you have all that volcanism — think of the Andes, for example, and the Ring of Fire,” Drabon said, describing a classic example of subduction.

“At 3.8 billion years there is a dramatic shift where the crust is destabilized, we have new rocks forming and we see geochemical signatures becoming more and more similar to what we see in modern plate tectonics,” Drabon said.

In contrast, the older zircons preserved evidence of a global cap of “protocrust” derived from remelting mantle rock that had remained stable for 600 million years, the study found.

The new study found a similar transition to conditions resembling modern subduction in zircons from other locations around the world, dating to within about 200 million years of the South African zircons.

“We see evidence for a significant change on the Earth around 3.8 to 3.6 billion years ago and evolution toward plate tectonics is one clear possibility.” Drabon said.

While not conclusive, the results suggest a global change may have begun, Drabon said, possibly starting and stopping in scattered locations before settling into the efficient global engine of constantly moving plates we see today.

Plate tectonics shapes Earth’s atmosphere as well as its surface. Release of volcanic gasses and production of new silicate rock, which consumes large amounts carbon dioxide from the atmosphere, temper large temperature swings from too much or too little greenhouse gas.

“Without all of the recycling and new crust forming, we might be going back and forth between boiling hot and freezing cold,” Drabon said. “It’s kind of like a thermostat for the climate.”

Plate tectonics has, so far, only been observed on Earth, and may be essential to making a planet livable, Drabon said, which makes the origins of plate motions of interest in research into the early development of life.

“The record we have for the earliest Earth is really limited, but just seeing a similar transition in so many different places makes it really feasible that it might have been a global change in crustal processes,” Drabon said. “Some kind of kind of reorganization was happening on Earth.”

Destabilization of long-lived Hadean protocrust and the onset of pervasive hydrous melting at 3.8 Ga