What happens in the brain of compulsive drug users? UNIGE researchers have pinpointed the circuit of the brain that controls addictive behaviour. 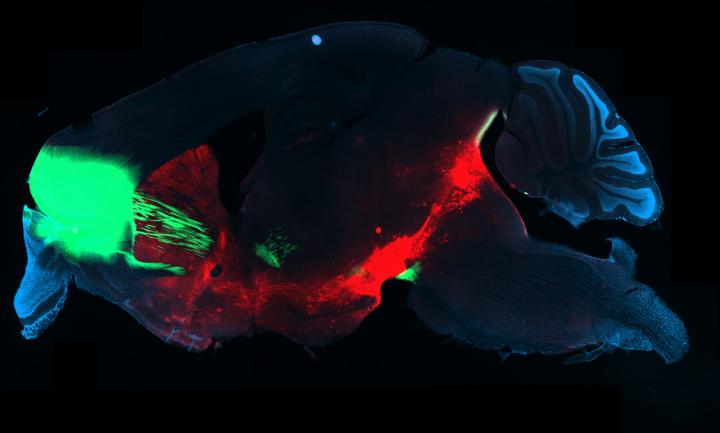 What happens in the brain of a compulsive drug user? What is the difference in brain function between an addict and a person who takes a drug in a controlled manner? In an attempt solve this puzzle, neurobiologists at the University of Geneva (UNIGE), Switzerland; have been looking at this difference in a rodent addiction model. They have discovered that the brain circuit connecting the decision-making region to the reward system is stronger in compulsive animals. The researchers also found that by decreasing the activity of this circuit, compulsive mice were able to regain control and that conversely, by stimulating the connection a mouse that initially remained in control became addicted. The work is published in this week’s edition of the journal Nature.

Addiction is an disease that develops in stages: it starts with the initial exposure to a substance followed by a phase where consumption remains controlled. Some individuals however will start using drugs compulsively in spite of the major negative effects it has on their lives (such as mounting debt, social isolation or incarceration). Clinical estimates suggest that only one person in five moves from controlled to compulsive use.

“We do not know why one person becomes addicted to drugs while another doesn’t,” begins Christian Lüscher, senior author and professor at the Departments of Basic and Clinical Neurosciences of the Faculty of Medicine. “But our study identifies the difference in brain function between the two behaviors.”

Negative effects are powerless against addiction

As a model of addiction, the researchers implanted mice with an optic fibre, which enabled the animal to stimulate its reward system located at the top of the brainstem. Pressing a small lever turned on a laser whose light activated a molecular switch previously added to nerve cells. The very same cells are activated by addictive drugs and are responsible for the behavioural reinforcement. “We then introduce a weak electric shock so that we could observe, which mice continued with the self-stimulation,” explains Vincent Pascoli, the study’s lead author and researcher in UNIGE’s Department of Basic Neurosciences. “This allowed us to identify the mice that had become compulsive.” Forty percent of the animals quickly stopped activating the lever following the introduction of the punishment. But 60% paid no heed to the negative consequences and continued to stimulate their reward system.

“When we used an optical technique to visualize the activity in the brain of freely moving mice. This uncovered a stronger activity in a circuit of addicted mice compared to mice that did not loose control,” continues professor Lüscher. “The circuit extends from the orbito-frontal cortex to the dorsal striatum, a part of the basal ganglia of the brain” The orbito-frontal cortex, located just above the eyes, is the region responsible for decision making.

The addiction circuit can be regulated

The UNIGE neurobiologists confirmed that this circuit was responsible for the compulsive behaviour by artificially increasing its activity in a mouse that remained in control. The animal quickly developed a compulsive self-stimulation pattern. “Conversely, when we reduced the activity of the circuit in an addicted mouse, she stopped activating the lever!” confirms Pascoli.

Given that the mice studied in the experiment were all genetically identical, how come the activity in the brain circuit was not the same for all of them? “That’s the question we’ll try to answer in our future research”, says professor Lüscher. Several hypotheses have been formulated, such as epigenetic contributions based on the life experiences that make each living being unique and influence the gene and brain function. “Thanks to the present study, we now know which circuit causes the addiction. It will then be easier to find out what causes the disruption in the circuit,” says Pascoli by way of conclusion.

Prisoners who are sanctioned more are more likely to re-offend

Unveiling a new map that reveals the hidden personalities of jobs