Very few people, other than professionals and those close to the young people who have this rare form of cancer have ever heard of a malignant peripheral nerve sheath tumor (MPNST). 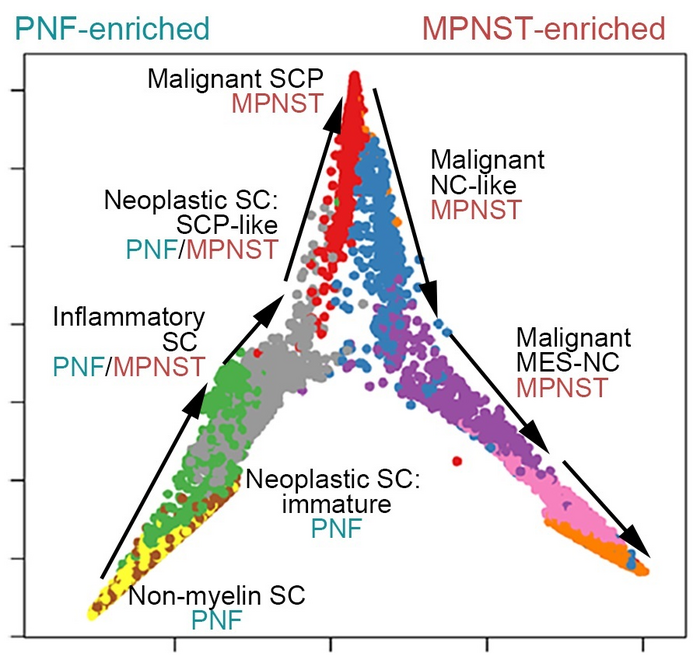 Very few people, other than professionals and those close to the young people who have this rare form of cancer have ever heard of a malignant peripheral nerve sheath tumor (MPNST).

Across the United States population of nearly 331 million people, about 13,000 people a year will be diagnosed with any form of soft tissue sarcoma. Only 5% to 10% of those cases will be MPNST, according to the National Cancer Institute and the American Cancer Society.

Unfortunately, MPNST is as devastating as it is infrequent. Despite existing forms of surgery, radiation therapy and chemotherapy, the five-year survival rate for MPNST ranges from 23% to 69%, depending largely on how far the cancer has spread when diagnosed.

The research is still at the preclinical stage, but after conducting a host of experiments that dissected these tumors one cell at a time to understand how they form and spread, the scientists used their insights to show significant disease improvement in mice.

Several years of work remain ahead to translate these findings into a better chemotherapy for people, but a new path has opened. A path that might also benefit people beyond those with MPNST.

“In discovering and studying this previously unrecognized subpopulation of mesenchymal neural-crest-like cells and their role in driving the malignancy of this cancer, we have found multiple druggable targets that merit further study as potential treatments for MPNST,” Lu says.

From NF1 to MPNST

About half of all MPNST cases occur among people previously diagnosed with neurofibromatosis type 1 (NF1), a genetic disorder that causes non-malignant but often life-disrupting nerve tumors to appear in a variety of locations on the body.

Experts at Cincinnati Children’s have been pioneers in studying NF1, producing much of the basic science discovery that led to the 2020 U.S. FDA approval of selumetinib – the first approved treatment available for children aged 2 and older. This study digs into how MPNST arises from NF1.

The team found that NF tumors transform into malignancies by acquiring a subpopulation of cells functioning in “mesenchymal neural crest stem-like states.” Signals from these cells remodel the tumor microenvironment, encouraging rapid growth and spread through a process known as the epithelial-to-mesenchymal transition (EMT), which endows benign tumor cells with malignant traits such as migration, invasion, and chemoresistance.

The study details a transcription factor network that regulates much of the complex molecular signaling involved. Specifically, the team identified that two genes ZEB1 and ALDH1A1 are critical to producing MPNST cells. Knocking down these genes in mice slowed tumor growth and reduced tumor cell proliferation.

“Detecting the activity of these genes could serve as biomarkers to detect which patients with NF1 might be on a more dangerous cancer path. Disrupting these genes’ ability to accelerate tumor growth could help treat the disease,” Wu says.

Lu and colleagues have begun work on identifying small-molecule compounds that can affect the signaling pathways supporting the dangerous subset of cells in MPNST tumors. Meanwhile, they have made their molecular and cellular blueprint of the transcriptional states and drivers for malignant transformation in MPNSTs available for scientists to analyze at the interactive web server https://viz.stjude.cloud/yu-lab/collection/MPNST-Lu-lab~11.