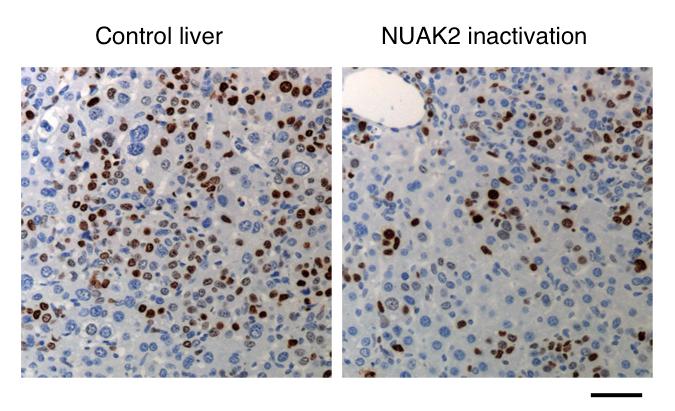 It’s known that cancer involves unchecked cell growth and that a biological pathway that regulates organ size, known at the Hippo pathway, is also involved in cancer. It’s further known that a major player in this pathway, YAP, drives many types of tumors. Now, researchers at Boston Children’s Hospital have solved an ongoing problem: how to turn this knowledge into a practical drug target. In a study published November 16 in Nature Communications, they show that YAP acts largely through another downstream player called NUAK2 that can readily be inactivated with a small molecule.

“The Hippo pathway, and especially YAP, has been hard to target with drugs,” says senior study author Fernando Camargo, PhD, of Boston Children’s Stem Cell Research program. “This is the first demonstration of a ‘druggable’ molecule that could be targeted in any type of tumor driven by YAP.”

Although the study involved liver cancer, the findings could be relevant to many YAP-driven oral cancers, head and neck squamous carcinomas, pancreatic cancers, ovarian cancers and squamous cell skin cancers, Camargo adds. The team hopes to test that in future studies.

YAP is a transcription factor, a type of target that’s been considered “undruggable,” since transcription factors lack structural features that enable a drug to bind to them. But YAP in turn regulates the activity of many other genes, and Wei-Chien Yuan, PhD, in the Camargo lab set out to identify these genes, in hopes of finding something else to target.

Using human liver cancer cell lines and a mouse model of liver cancer, Yuan combined several assays to zero in on what downstream genes YAP influences. She found 14, then narrowed her search to kinases, enzymes that are especially amenable to being targeted with drugs. Just one emerged: NUAK2.

Targeting NUAK2 has an added benefit, says Camargo, who is also affiliated with the Dana-Farber/Boston Children’s Cancer and Blood Disorders Center. “It feeds back to further activate YAP itself, so inhibiting NUAK2 further decreases activity of YAP, which is exactly what you want.”

Yuan and her colleagues now hope to extend their findings.

“We know that inhibiting NUAK2 works in liver cancer. We now need to see if same mechanism is in play in other cancers,” says Camargo.

They also plan to modify their small molecule, originally synthesized in the lab of Nathanael Gray, PhD, at the Dana-Farber Cancer Institute.

“We want to see if we can make the compound more selective,” says Yuan, first author on the paper. “It has other nonspecific targets, so we need to modify it to make it usable.”

The story of YAP began over a decade ago with the discovery of the size-control pathway Hippo – so named because manipulating it in fruit flies led to growth of enormous tumors, oversized eyes and wings eight times the normal size. Larger animals with defects in Hippo were also found to have overgrown body parts, and Camargo showed that activating YAP can quadruple the size of a mouse liver. Hippo and YAP later became of interest to cancer researchers.

Boston Children’s Hospital, the primary pediatric teaching affiliate of Harvard Medical School, is home to the world’s largest research enterprise based at a pediatric medical center. Its discoveries have benefited both children and adults since 1869. Today, more than 3,000 scientists, including nine members of the National Academy of Sciences, 17 members of the National Academy of Medicine and 11 Howard Hughes Medical Investigators comprise Boston Children’s research community. Founded as a 20-bed hospital for children, Boston Children’s is now a 415-bed comprehensive center for pediatric and adolescent health care. For more, visit our Vector and Thriving blogs and follow us on social media @BostonChildrens, @BCH_Innovation, Facebook and YouTube.

How to enlarge 2D materials as single crystals?

Scienmag May 22, 2019
Turn it around and find the right symmetric codeCredit: IBS What makes something a crystal? A transparent and…

Measuring impact of drought on groundwater resources from space