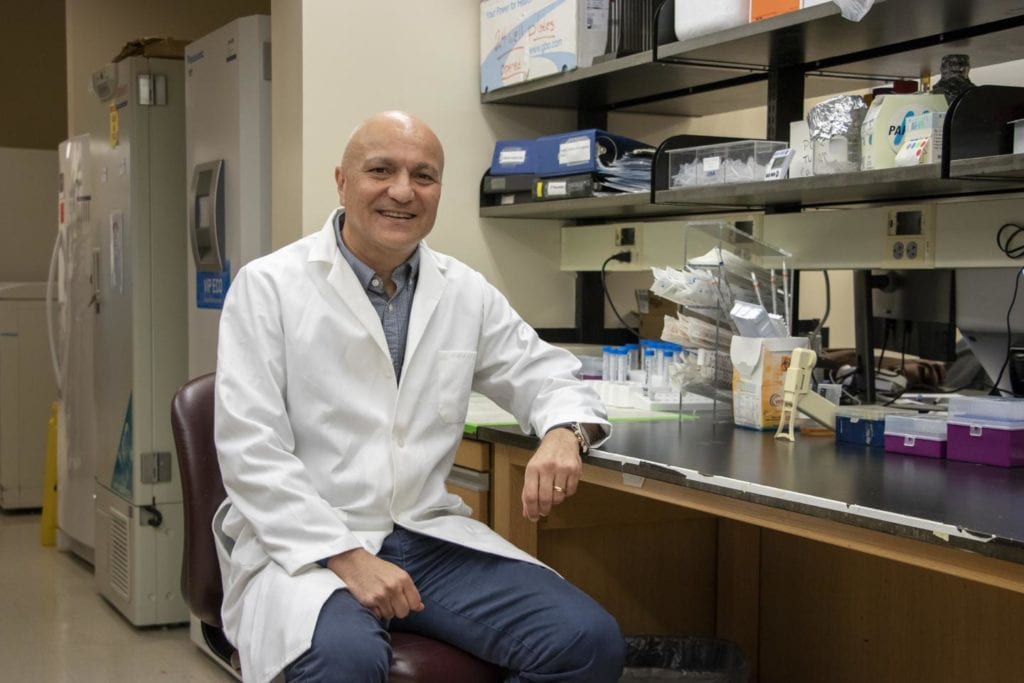 Old molecules and new complexes: researchers at Hollings Cancer Center at the Medical University of South Carolina (MUSC) have discovered cell membrane complexes called ceramidosomes that may be a new target for drugs to kill cancer cells. This discovery began while figuring out the unexpected cancer cell-killing activity of an FDA-approved multiple sclerosis drug called FTY720 (Gilenya, Novartis). Their findings are reported in the January 2019 issue of the Journal of Biological Chemistry.

“These complexes are really interesting as they form in the cell membrane and cause the cells to explode,” says Besim Ogretmen, Ph.D., Endowed Chair in Lipidomics & Drug Discovery in the SmartState Center for Lipidomics, Pathobiology and Therapy at Hollings Cancer Center and professor in the Department of Biochemistry and Molecular Biology.

The Ogretmen Lab coined the term “ceramidosome” when they identified this complex structure made up of lipid (fatty) molecules called ceramide, and two other protein components. The identification of “-somes” has been growing in recent years as researchers are getting a better understanding of which individual molecules come together to form important but previously unknown functions.

Simply put, a cell is like an egg and the cell membrane is like the eggshell. Just as eggshells have tiny openings or pores that allow for air and moisture to move in and out, cell membranes have thousands of pores. Ceramides are chains of lipid molecules that are in the cell membrane and have a function in controlling cell death. The Ogretmen research team discovered that ceramides can come together with other molecules and form a new type of cell membrane pores: ceramidosomes.

Ceramidosomes are large membrane pores that cause the cell membrane to ripple. A rippled cell membrane is weak, and the cell explodes and dies, similar to how a cracked eggshell cannot contain the contents of the egg.

The Ogretmen Lab has been studying the multiple biological functions of lipid molecules such as ceramides for many years. However, FTY720 is an FDA-approved drug that also plays anti-cancer roles, in part by inducing ceramidosomes in the cell membrane. When researchers put FTY720 on cancer cells, they were surprised to find that the cancer cells die. Using FTY720 as a tool to look into what was going on, the Ogretmen lab set out to understand how the cancer cells are dying.

The lab’s main focus was to study whether ceramide production plays any role in the observed FTY720-driven cancer cell death. The drug is approved to treat multiple sclerosis. It works by reducing immune system activity, but it must first be specially modified by the liver in order to work for immune suppression.

The Ogretmen lab found that this drug kills cancer cells without the liver modification step. FTY720 works by activating molecules that induce tumor suppression. Just like a chain reaction, the drug turns cancer cells against themselves. This is a novel method of cell death due to the molecules involved and the way the cell essentially explodes. If the ceramidosome is prevented from forming, drug-treated cells do not die. This revealed that the ceramidosome formation is integral to drug-induced cancer cell death.

The lab’s initial discovery has led the way for many further studies. More in-depth molecular studies are necessary to determine how the ceramidosomes are activated and move around in the cell membrane. They may also have other functions besides causing cell death. For example, they also found that certain cells such as germline stem cells have ceramidosomes even without FTY720 treatment.

These initial findings are a positive step in the search for more effective cancer drugs. Since FTY720 is FDA approved, there is the possibility that it can be used off-label for cancer treatments. Different versions of the drug are also being studied to find modifications that still kill cancer cells but do not suppress the immune system. Just like good detectives, the researchers are moving clue by clue to figure out the unknown functions of this newly discovered ceramidosome complex. Using FTY720 as a tool to induce ceramidosomes, the researchers hope to accelerate progress along the path from lab bench to patient bedside.

“Understanding the fundamental mechanisms of how cancer cells grow uncontrollably is a key for developing more effective drugs to kill them, and this is our goal,” says Ogretmen.

The Hollings Cancer Center at the Medical University of South Carolina is a National Cancer Institute-designated cancer center and the largest academic-based cancer research program in South Carolina. The cancer center comprises more than 100 faculty cancer scientists and 20 academic departments. It has an annual research funding portfolio of more than $40 million and a dedication to reducing the cancer burden in South Carolina. Hollings offers state-of-the-art diagnostic capabilities, therapies and surgical techniques within multidisciplinary clinics that include surgeons, medical oncologists, radiation therapists, radiologists, pathologists, psychologists and other specialists equipped for the full range of cancer care, including more than 200 clinical trials. For more information, visit http://www.hollingscancercenter.org

Wave device could deliver clean energy to thousands of homes

Unknown mini-proteins in the heart

AI to predict the protein structure