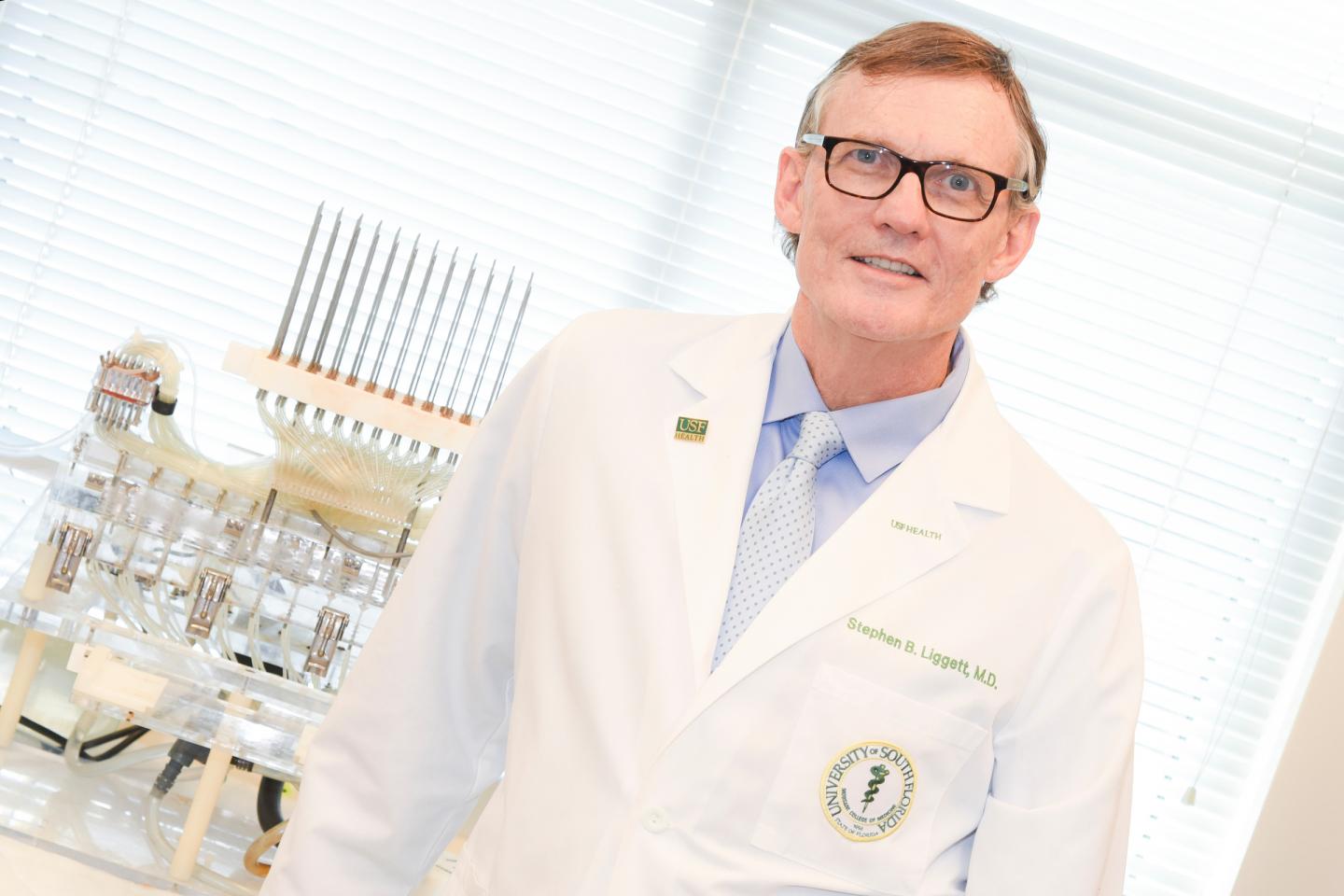 TAMPA, Fla (Jan 4, 2021) — Despite the progress made in managing asthma and chronic obstructive pulmonary disease (COPD), poorly controlled symptoms for both respiratory diseases can lead to severe shortness of breath, hospitalizations or even death.

“Only about 50 percent of asthmatics, and an even lower percentage of people with COPD, achieve adequate control of lung inflammation and airway constriction with currently available medications,” said Stephen Liggett, MD, vice dean for research at the University of South Florida Morsani College of Medicine and a USF Health professor of medicine, molecular pharmacology and physiology, and biomedical engineering. “So, we’re clearly missing something from our drug armamentarium to help all these patients.”

A promising bronchodilator agonist rises to the top

In a preclinical study published Nov. 5 in ACS Pharmacology and Translational Science, Dr. Liggett and colleagues identified and characterized 18 new compounds (agonists) that activate bitter taste receptor subtype TAS2R5 to promote relaxation (dilation) of human airway smooth muscle cells. The cross-disciplinary team found 1,10 phenanthroline-5,6-dione (T5-8 for short) to be the most promising of several lead compounds (drug candidates). T5-8 was 1,000 times more potent than some of the other compounds tested, and it demonstrated marked effectiveness in human airway smooth muscle cells grown in the laboratory.

For this drug discovery project, Dr. Liggett’s laboratory collaborated with Jim Leahy, PhD, professor and chair of chemistry at the USF College of Arts and Sciences, and Steven An, PhD, professor of pharmacology at the Rutgers Robert Wood Johnson Medical School.

In an extensive screening conducted previously, another research group identified only one compound that would bind to and specifically activate the TASR5 bitter taste receptor – although apparently with limited effectiveness. Using this particular agonist (called T5-1 in the paper) as a starting point, the team relied on their collective disciplines to devise new activators, aiming for a much better drug profile for administration to humans.

“The two key questions we asked were: ‘Is it possible to find a more potent agonist that activates this receptor?’ and ‘Is it feasible to deliver by inhalation given the potencies that we find?'” said Dr. Liggett, the paper’s senior author. “T5-8 was the bronchodilator agonist that worked best. There were a few others that were very good as well, so we now have multiple potential new drugs to carry out the next steps.”

The researchers developed screening techniques to determine just how potent and effective the 18 compounds were. A biochemical test assessed how well these new agonists activated TAS2R5 in airway smooth muscle cells isolated from non-asthmatic human donor lungs. Then, the researchers validated the effect on airway smooth muscle relaxation using a technique known as magnetic twisting cytometry, pioneered by Dr An.

“The biggest challenge we faced was not having a 3-D crystal structure of TAS2R5, so we had no idea exactly how agonist T5-1 fit into this mysterious bitter taste receptor,” Dr. Liggett said. “By merging our strength in receptors, pharmacology, physiology, and drug development, our team was able to make the breakthrough.”

T5-8 was superior to all the other bronchodilator agonists screened, exhibiting a maximum relaxation response (50%) substantially greater than that of albuterol (27%). Albuterol belongs to the only class of direct bronchodilators (beta-2 agonists) available to treat wheezing and shortness of breath caused by asthma and COPD. However, this drug or its derivatives, often prescribed as a rescue inhaler, does not work for all patients and overuse has been linked to increased hospitalizations, Dr. Liggett said. “Having two distinct classes of drugs that work in different ways to open the airways would be an important step to help patients optimally control their symptoms.”

The ACS Pharmacology paper highlights the importance of translational research in bridging the gap between laboratory discoveries and new therapies to improve human health, he added. “This study yielded a drug discovery that successfully meets most of the criteria needed to advance the compound toward its first trial as a potential first-in-class bronchodilator targeting airway receptor TAS2R5.”

The study was supported by a grant from the NIH’s National Heart, Lung, and Blood Institute.

USF Health’s mission is to envision and implement the future of health. It is the partnership of the USF Health Morsani College of Medicine, the College of Nursing, the College of Public Health, the Taneja College of Pharmacy, the School of Physical Therapy and Rehabilitation Sciences, the Biomedical Sciences Graduate and Postdoctoral Programs, and USF Health’s multispecialty physicians group. The University of South Florida is a high-impact global research university dedicated to student success. Over the past 10 years, no other public university in the country has risen faster in U.S. News and World Report’s national university rankings than USF. For more information, visit health.usf.edu.