PULLMAN, Wash. – Struggling salmon populations could get some help from the sky. A Washington State University study showed that drone photography of the Wenatchee River during spawning season can be effective in estimating the number of rocky hollows salmon create to lay their eggs, also called “redds.” 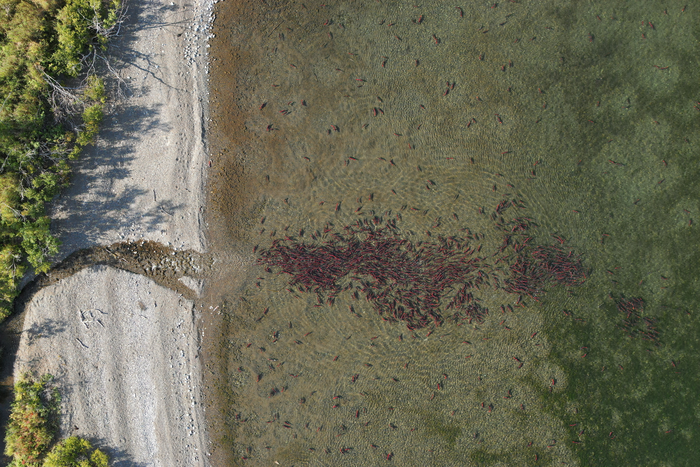 PULLMAN, Wash. – Struggling salmon populations could get some help from the sky. A Washington State University study showed that drone photography of the Wenatchee River during spawning season can be effective in estimating the number of rocky hollows salmon create to lay their eggs, also called “redds.”

The drone imagery appeared to find roughly double the number of potential redds than ground-level observations, but uncertainty remains because of the ongoing challenge of determining what is and isn’t a true redd. Short of taking the nest apart, there is no way to know for sure if salmon eggs are present.

Still, the research showed some advantages to using drones, said Daniel Auerbach, lead author of the study published in the journal River Research and Applications.

“There’s no denying that salmon populations are in decline, so we want to do the best job and use the best technology that we can to help this species out,” said Auerbach a WSU doctoral candidate. “While ground redd counts are less intrusive than other counts, drones are even less invasive, and we can use these images for many things.”

In addition to a one-time count, researchers can use drone images to look at changes in habitat over time, including mitigations humans put in place to help salmon, which range from planting shrubs to removing whole dams.

“These technologies will give us more data to really find out if what we’re doing is working,” said Alex Fremier, study co-author and an associate professor in the WSU School of the Environment. “A drone provides a bird’s eye view and high-resolution images. Because we can get so much information from these images, we could be more cost effective and help determine if a restoration project helped build salmon habitat.”

Current methods of counting redds involve field biologists walking lengths of river or floating downstream in a boat. Some places use helicopters to let scientists observe from above, which can be dangerous in steep canyons.

For this study, Auerbach and Fremier collaborated with Washington Department of Fish and Wildlife field biologists to identify three locations along the main stem of the Wenatchee River that are well known for the density of redds. Then, once a week during the Chinook spawning season of September through November 2020, the researchers flew a drone about 150 feet above those areas to take images. Then, trained observers would each count redds based on those images.

The observers using the drone imagery found roughly double the number of redds than those on the ground, but there was wide variability of plus or minus 80 redds among the human observers. This variability is not unusual because salmon sometimes start a nest but abandon it in favor of a better place, and these false-starts can muddy the waters of counts by any method.

Auerbach and Fremier stressed that drones can augment but likely not replace the boots-in-the-water count as field biologists will always be needed. But drones have some advantages including a greater field of view and ability to switch between the images, Auerbach said.

The researchers are continuing to explore ways to use drones to help salmon. They are currently analyzing data from a second study on the Wenatchee done in 2021 in collaboration with Katy Shelby of Washington Department of Fish and Wildlife. Auerbach also recently ran a study in Alaska using drones to count Sockeye salmon. The images proved so clear they could even identify whether a fish was female or male by their size.