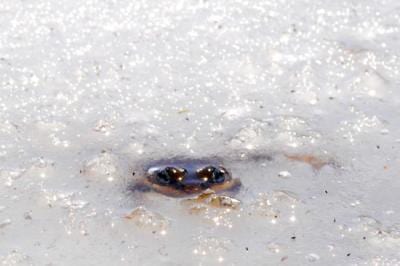 A species of frog endemic to the Pacific Northwest faces a 50 per cent increase in the probability of extinction by the 2080s due to climate change, according to a new study published by SFU researchers in the Ecological Society of America.

The mountain-dwelling Cascades frog thrives in extreme climatic conditions, ranging from dozens of feet of snow in winter to temperatures in excess of 90°F in summer. Cascades frogs are explosive breeders and their role as predators of flying insects is critical to aquatic and terrestrial ecosystems.

SFU biologist Wendy Palen, along with co-authors Mike Adams of the United States Geological Survey and Maureen Ryan and Amanda Kissel of Conservation Science Partners, set out to understand the effects of climate change on these unique amphibians.

Specifically, they aimed to assess how the warmer and drier temperatures occurring with climate change affect the survival of two distinct aspects of the frog’s life cycle: in the aquatic stage where the frogs develop as tadpoles in shallow ponds, and in the terrestrial environment stage where they live as adults.

During the frogs’ aquatic stage, the researchers evaluated whether warmer temperatures would increase food production and result in larger, healthier frogs upon metamorphosis, or whether entire generations of frogs would die in years when warmer, drier winters lead to ponds that dry quickly, stranding tadpoles before metamorphosis.

For the terrestrial stage, they evaluated whether the milder winters of climate change would present a warm welcome and lead to higher survival of adult frogs.

The species has been tracked in Olympic National Park’s Sol Duc watershed for approximately 15 years. In fact, Palen, now a professor of biology at SFU, was a graduate student at the University of Washington when she began tagging hundreds of frogs with tiny microchips.

More recently Kissel, a lead scientist at Conservation Science Partners, continued the work by monitoring more than 50 ponds that the frogs use for breeding. She tracked water levels and the timing of metamorphosis to identify how often ponds dried before the frogs could emerge.

The team found that currently, up to a quarter of the tadpoles are stranded and die each year. Applying projections from hydrologists from the universities of Washington and Notre Dame, the researchers predict that nearly 40 per cent of the tadpoles could be lost by the 2080s as a result of dry ponds.

Taking both trends together, the researchers forecast that the Cascades frog will have a 62 per cent chance of extinction risk by the 2080s.

Kissel says, “This is a worst-case scenario, where a frog that largely occurs inside some of our most protected landscapes will be at high risk of extinction by the end of this century.”

The study supports an emerging picture of climate change in the Pacific Northwest where, as a result of warmer temperatures, precipitation will fall more often as rain rather than snow, leading to longer, drier summers with compounding negative consequences for many wildlife species.

‘Why can’t a woman be more like a man?’ studying gender’s role in Alzheimer’s disease

Scienmag May 29, 2019
Researchers are developing new materials for solid-state thin-film Li-ion batteries for micro and…

Nanoscale visualization of the distribution and optical behavior of…