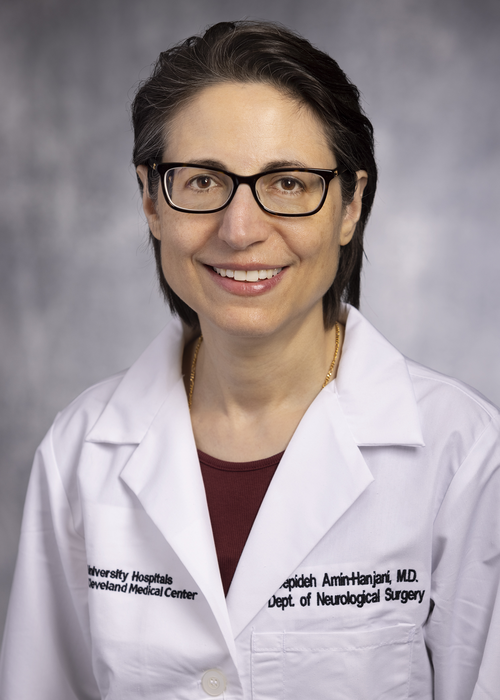 She assumes the position from Nicholas C. Bambakidis, MD, who was promoted in January this year to Chair of the Department of Neurosurgery at UH Cleveland Medical Center.  At that time, he also was named the Harvey Huntington Brown, Jr. Chair in Neurosurgery.

“Dr. Amin-Hanjani is a nationally renowned neurosurgeon who is known for her excellent surgical skills, dedication to training the next generation of neurosurgeons, and for leading large-scale, multi-site studies in stroke,” said Dr. Bambakidis.  “She is a luminary in the field.”

With UIC since 2005, Dr. Amin-Hanjani was a tenured Professor and served as Co-Director of Neurovascular Surgery there.  Her clinical work focused on treatment of cerebrovascular disease, and skull base pathology, which encompasses noncancerous and cancerous growths and other abnormalities on the underside of the brain. She brings with her over 20 years of specialized expertise in microsurgical treatment of brain aneurysms and other abnormalities affecting brain blood vessels, as well as her international reputation in performing brain blood vessel bypass surgery.

She received her medical degree at Harvard Medical School and completed neurosurgery residency training at Massachusetts General Hospital in Boston, followed by a Cerebrovascular and Skull Base fellowship at the Barrow Neurological Institute in Phoenix.

Her long-standing research interests lie in the area of cerebrovascular blood flow and stroke, and she has held National Institutes of Health (NIH) funding as principal investigator for the VERiTAS study, a multi-site international study of blood flow in cerebrovascular occlusive disease. She has been actively involved with the NIH national StrokeNet consortium, a stroke trials network, currently serving on the StrokeNet Prevention Working Group. She is Co-PI of the recently renewed NIH K12 grant for the Neurosurgery Research Career Development Program (NRCDP), which supports the research, and develops the scientific careers, of junior neurosurgeon-investigators across the country.

Dr. Amin-Hanjani has been a member of the Board of the American Association of Neurological Surgeons (AANS) since 2019, and was elected to the role of Treasurer this year. She was also previously Member-at-Large of the Congress of Neurological Surgeons (CNS) Executive Committee, Chair of the AANS/CNS Joint Cerebrovascular Section, and Chair of the AANS/CNS Joint Guidelines Review Committee.

She is a contributor to several additional national committees, including serving as the current Chair of the Neurovascular Intervention Committee of the American Heart Association/American Stroke Association (AHA/ASA) Stroke Council, and the Vice Chair of the Leadership Committee of the AHA/ASA Stroke Council. She has long been an advocate for patients, and serves as a Medical Advisory Board Regional Co-director for the Brain Aneurysm Foundation.

Dr. Amin-Hanjani has also been very active in medical residency education, previously as Residency Program Director at UIC for more than a decade, and currently as a member of the Neurological Surgery Review Committee of the Accreditation Council for Graduate Medical Education (ACGME). She serves on the American College of Surgeons (ACS) Committee on Resident Education, and is Member-at-Large of the Society of Neurological Surgeons (SNS) Executive Council, the organization dedicated to promoting neurosurgical education. She has mentored numerous medical students, residents and fellows over the past 20 years, and continues to serve as faculty for hands-on training courses in bypass surgery, skull base approaches and fundamental skills for residents/fellows.

She has authored more than 200 publications and 30 book chapters.  She participates actively in editorial review for multiple journals, including currently serving as Co-Chair of the Editorial Board of Journal of Neurosurgery, and a member of the Stroke and Neurosurgery Editorial Boards where she has received awards for reviewer excellence.

Dr. Amin-Hanjani has been listed consistently in Best Doctors and Castle Connolly Top Doctors list, and received the UIC Departmental Faculty of the Year award for Clinical Service.

About University Hospitals / Cleveland, Ohio
Founded in 1866, University Hospitals serves the needs of patients through an integrated network of 23 hospitals (including five joint ventures), more than 50 health centers and outpatient facilities, and over 200 physician offices in 16 counties throughout northern Ohio. The system’s flagship quaternary care, academic medical center, University Hospitals Cleveland Medical Center, is affiliated with Case Western Reserve University School of Medicine, Northeast Ohio Medical University, Oxford University and the Technion Israel Institute of Technology. The main campus also includes the UH Rainbow Babies & Children’s Hospital, ranked among the top children’s hospitals in the nation; UH MacDonald Women’s Hospital, Ohio’s only hospital for women; and UH Seidman Cancer Center, part of the NCI-designated Case Comprehensive Cancer Center. UH is home to some of the most prestigious clinical and research programs in the nation, with more than 3,000 active clinical trials and research studies underway. UH Cleveland Medical Center is perennially among the highest performers in national ranking surveys, including “America’s Best Hospitals” from U.S. News & World Report. UH is also home to 19 Clinical Care Delivery and Research Institutes. UH is one of the largest employers in Northeast Ohio with more than 30,000 employees. Follow UH on LinkedIn, Facebook and Twitter. For more information, visit UHhospitals.org.