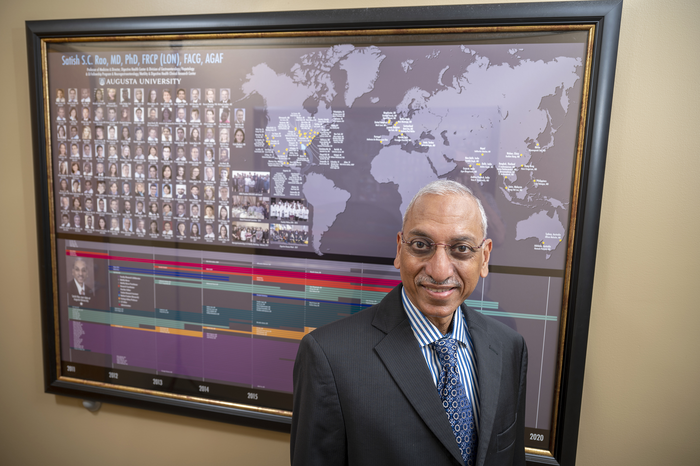 The lifelong educator and mentor for medical students, residents, fellows, postdocs and young faculty, was honored by the 15,000-member, international group for his meaningful and sustained contributions to trainees and colleagues in gastroenterology. These contributions include development of mentees’ overall scientific growth and career or life planning; practice of high-level clinical gastroenterology; skills to perform high-quality clinical research; skills to present and publish results of clinical research, or quality improvement; and involvement in professional society, health care organization or leadership development.

The award was presented Oct. 23 during the ACG’s annual meeting in Las Vegas.

Rao says he has been fortunate to have many excellent educators and mentors in his own career, and that the first was his father, Dr. S. Ramachander Rao, an internist who would become dean of Osmania Medical College at Osmania University in Hyderabad, India, which would become the son’s medical school alma mater.

The elder Rao was a natural physician-scientist, whose clinical research pursuits included pulmonary amoebiasis, in which an amoebic infection which more commonly affects the gut and liver, spreads to the lungs. The elder Rao also recognized that in their native South India, farmers, many in their 40s and very active, had become stooped. On X-ray, their spines were fused and deformed and their teeth were getting larger and calcified. His diligence would determine that a dam was stagnating river water, which drove up fluoride content in underground water and in the wells the farmers used causing fluorosis. He ultimately identified a solution to remove toxic levels of the more typically protective compound.

Rao would learn from his father and others like Dr. Nick Read, longtime professor of human nutrition and gastrointestinal physiology at Sheffield University in the United Kingdom where Rao earned his PhD, and acclaimed gastroenterologist Sir Ian Thomas Gilmore, a consultant at Royal Liverpool University Hospital, that being a good mentor meant having an innate striving to be a good role model who helps inculcate in mentees “the whole spirit of either research or education or becoming a strong physician.”

Mentors in particular must comprehensively understand their mentees, listen to them and impart knowledge, while ensuring that they maintain the independence to grow and meet their life goals, he says. Part of that for Rao means including mentees and other learners in his pursuits to improve the field of gastroenterology, with ongoing studies to better evaluate and innovatively treat common problems like irritable bowel syndrome, gas and bloating, constipation and fecal incontinence.

Rao tells young physicians looking to train in gastroenterology at MCG and  AU Health: “Our goal here is not just to train you to become a gastroenterologist. We want you to have this holistic experience of learning all there is to learn as a researcher, as an educator, as a clinician and as an endoscopist. We will equip you with those skills so that tomorrow you can choose what you want to do.”

He remains grateful and inspired after more than 30 years as an educator and mentor, and cognizant that doing both well requires setting a high bar for himself.

“I hope for each of them that their association with me has been an inspiring and life-changing experience. That I have helped them in some way be the best they can be. I think if I have been able to give that, I have achieved my role as a mentor,” he says.

His first teaching accolades came in 1994 when the American Gastroenterological Association nominated him as one of three American experts to teach members of the Russian Association of Coloproctology about the colon, rectum and anus, and the next year when he was nominated by the World Congress of Gastroenterology as a national expert on demonstrating gastrointestinal motility procedures.

He was honored as an outstanding preceptor for introducing medical students to clinical medicine for the first time in 1996, and again the next year by the University of Iowa, where he served for 20 years before coming to MCG in 2011. Education as well as research honors have continued throughout his career, including an American Gastroenterological Association Distinguished Educator Award in 2007, the University of Iowa Regents Award for Faculty Excellence in 2010 and a Mentoring Excellence Award from MCG this year.

He has helped educate and mentor more than 60 undergraduate students, medical students, postdocs, fellows and residents with his clinical acumen and innovative, federally funded clinical research; more than 80 postdoctoral research fellows and graduate research fellows and assistants now in private practice and academic practices across the nation and beyond; as well as 23 junior faculty representing institutions from Thailand to California and across five continents.

His mentees have been honored internationally each year for more than 20 years, such as Dr. Seung-Jae Myung, gastroenterologist, educator and researcher at Asian Medical Center in Seoul who is president of the Korean GI Society, and Dr. Eula Tetangco, a gastroenterology fellow at MCG and AU Health now in practice in Henderson, Kentucky, who received the ACG’s 2020 Award for Excellence in Clinical Research. Dr. Tetangco is among 34 gastroenterology/hepatology fellows Rao has supervised at MCG and AU Health in the last decade.

Rao co-chaired the International Committee for Standardization of Anorectal Manometry and Classification of Anorectal Disorders from 2015-18, chaired the Neurogastroenterology and Motility Section of the AGA Institute Council from 2015-17 and currently serves on the AGA Institute’s Research Awards Panel. He served as president of the American Neurogastroenterology and Motility Society in 2010.

Rao completed his clinical research fellowships in gastroenterology in 1987 at Royal Hallamshire and Liverpool Hospitals in the United Kingdom. He is a fellow of the Royal College of Physicians, London.