Earlier this year a machine learning algorithm identified up to 5,000 potential gravitational lenses that could transform our ability to chart the evolution of galaxies since the Big Bang. 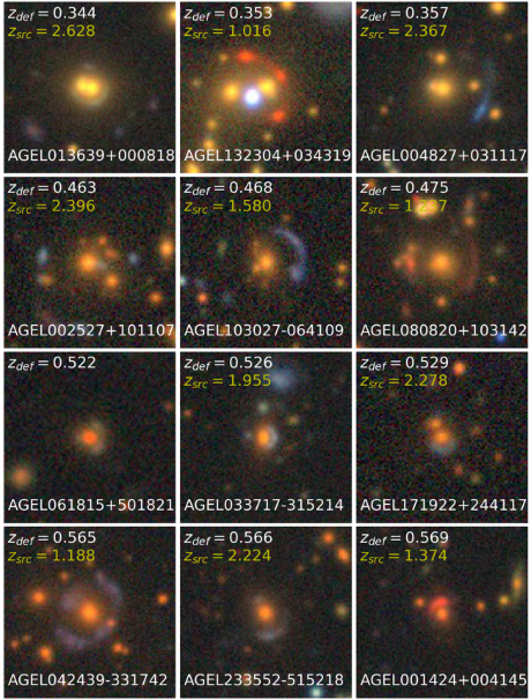 Earlier this year a machine learning algorithm identified up to 5,000 potential gravitational lenses that could transform our ability to chart the evolution of galaxies since the Big Bang.

Now astronomer Kim-Vy Tran from ASTRO 3D and UNSW Sydney and colleagues have assessed 77 of the lenses using the Keck Observatory in Hawai’i and Very Large Telescope in Chile. She and her international team confirmed that 68 out of the 77 are strong gravitational lenses spanning vast cosmic distances.

The work is part of the ASTRO 3D Galaxy Evolution with Lenses (AGEL) survey.

“Our spectroscopy allowed us to map a 3D picture of the gravitational lenses to show they are genuine and not merely chance superposition,” says corresponding author Dr. Tran from the ARC Centre of Excellence for All Sky Astrophysics in 3-Dimensions (ASTRO3D) and the University of NSW (UNSW).

“Our goal with AGEL is to spectroscopically confirm around 100 strong gravitational lenses that can be observed from both the Northern and Southern hemispheres throughout the year,” she says.

The paper is the result of a collaboration spanning the globe with researchers from Australia, the United States, the United Kingdom, and Chile.

The work was made possible by the development of the algorithm to look for certain digital signatures.

“With that we could identify many thousands of lenses compared to just a few handfuls,” says Dr. Tran.

In doing so, it greatly magnifies images of galaxies that we would not otherwise be able to see.

While it has been used by astronomers to observe far away galaxies for a long time, finding these cosmic magnifying glasses in the first place has been hit and miss.

“These lenses are very small so if you have fuzzy images, you’re not going to really be able to detect them,” says Dr. Tran.

While these lenses let us see objects that are millions of light years away more clearly, it should also let us ‘see’ invisible dark matter that makes up most of the Universe.

“We know that most of the mass is dark,” says Dr. Tran. “We know that mass is bending light and so if we can measure how much light is bent, we can then infer how much mass must be there.”

Having many more gravitational lenses at various distances will also give us a more complete image of the timeline going back almost to the Big Bang.

“The more magnifying glasses you have, the better chance you can try to survey these more distant objects. Hopefully, we can better measure the demographics of very young galaxies,” says Dr. Tran.

“Then somewhere between those really early first galaxies and us there’s a whole lot of evolution that’s happening, with tiny star forming regions that convert pristine gas into the first stars to the sun, the Milky Way.

“And so with these lenses at different distances, we can look at different points in the cosmic timeline to track essentially how things change over time, between the very first galaxies and now.”

“Being able to collaborate with people, at different universities, has been so crucial, both for setting the project up in the first place, and now continuing with all of the follow-up observations,” she says.

Professor Stuart Wyithe of the University of Melbourne and Director of the ARC Centre of Excellence for All Sky Astrophysics in 3 Dimensions (Astro 3D) says each gravitational lens is unique and tells us something new.

“Apart from being beautiful objects, gravitational lenses provide a window to studying how mass is distributed in very distant galaxies that are not observable via other techniques. By introducing ways to use these new large data sets of the sky to search for many new gravitational lenses, the team opens up the opportunity to see how galaxies get their mass,” he says.

Professor Karl Glazebrook of Swinburne University, and Dr Tran’s Co-Science Lead on the paper, paid tribute to the work that had gone before.

“This algorithm was pioneered by Dr Colin Jacobs at Swinburne. He sifted through tens of millions of galaxy images to prune the sample down to 5,000. Never did we dream that the success rate would be so high,” he says.

“Now we are getting images of these lenses with the Hubble Space Telescope, they range from jaw-droopingly beautiful to extremely strange images that will take us considerable effort to figure out.”

Associate Professor Tucker Jones of UC Davis, another co-science lead on the paper, described the new sample as “a giant step forward in learning how galaxies form over the history of the Universe”.

“Normally these early galaxies look like small fuzzy blobs, but the lensing magnification allows us to see their structure with much better resolution. They are ideal targets for our most powerful telescopes to give us the best possible view of the early universe,” he says.

“Thanks to the lensing effect we can learn what these primitive galaxies look like, what they are made of, and how they interact with their surroundings.”

We present spectroscopic confirmation of candidate strong gravitational lenses using the Keck Observatory and Very Large Telescope as part of our ASTRO 3D Galaxy Evolution with Lenses (AGEL) survey. We confirm that 1) search methods using Convolutional Neural Networks (CNN) with visual inspection successfully identify strong gravitational lenses and 2) the lenses are at higher redshifts relative to existing surveys due to the combination of deeper and higher resolution imaging from DECam and spectroscopy spanning optical to near-infrared wavelengths. We measure 104 redshifts in 77 systems selected from a catalog in the DES and DECaLS imaging fields (r ≤ 22 mag). Combining our results with published redshifts, we present redshifts for 68 lenses and establish that CNN-based searches are highly effective for use in future imaging surveys with a success rate of 88% (defined as 68/77). We report 53 strong lenses with spectroscopic redshifts for both the deflector and source (zsrc>zdefl), and 15 lenses with a spectroscopic redshift for either the deflector (zdefl> 0.21) or source (zsrc≥ 1.34). For the 68 lenses, the deflectors and sources have average redshifts and standard deviations of 0.58 ± 0.14 and 1.92 ± 0.59 respectively, and corresponding redshift ranges of zdefl=(0.21−0.89) and zsrc=(0.88−3.55). The AGEL systems include 41 deflectors at zdefl≥ 0.5 that are ideal for follow-up studies to track how mass density profiles evolve with redshift. Our goal with AGEL is to spectroscopically confirm ∼ 100 strong gravitational lenses that can be observed from both hemispheres throughout the year. The AGEL survey is a resource for refining automated all-sky searches and addressing a range of questions in astrophysics and cosmology.