Like many neurological diseases, there’s a lot we don’t understand about fragile X syndrome. But, after studying the disorder for several years, Lynne Maquat’s lab knew two important things: the enzyme AKT, which plays a key role in cell growth and survival, and the quality control pathway known as NMD (nonsense-mediated mRNA decay), are both in overdrive in fragile X. 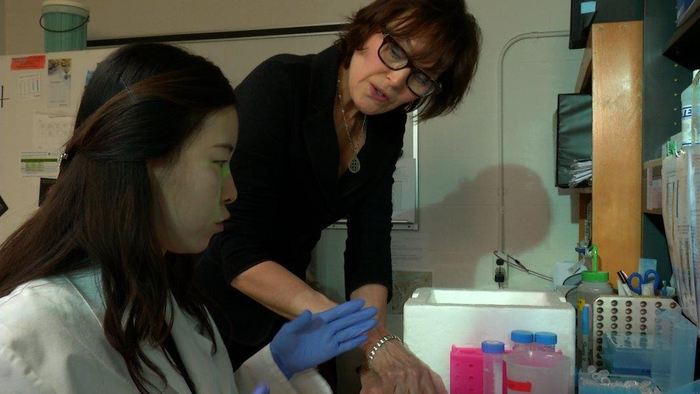 Like many neurological diseases, there’s a lot we don’t understand about fragile X syndrome. But, after studying the disorder for several years, Lynne Maquat’s lab knew two important things: the enzyme AKT, which plays a key role in cell growth and survival, and the quality control pathway known as NMD (nonsense-mediated mRNA decay), are both in overdrive in fragile X.

In a new study in the journal Molecular Cell, the team reveals how these two major players interact, highlighting a complex molecular dance that could inform the development of future treatments for fragile X syndrome.

AKT is a hub for cell signaling, helping cells communicate about important processes like cell growth, proliferation and protein production. When cells are stressed – for example, in cancer, diabetes, heart disease and neurological disorders, including fragile X – AKT can send too many (or too few) signals or messages as part of a cell survival mechanism.

NMD is like a molecular guide that helps our cells make smart decisions that (in most cases) improve cellular function and contribute to good health. For example, NMD supports gene expression by flagging and destroying mRNAs (messenger RNAs) that are carrying faulty genetic instructions that could lead to disease. It also helps our cells adjust to changes in development and in their environment, and more rapidly respond to certain stimuli.

Taking these findings a step further, the team treated the neural stem cells that mimic fragile X syndrome with a drug called Afuresertib, which inhibits AKT and is currently being tested in phase 1 and 2 clinical trials for several types of cancer. They found that blocking AKT in the fragile X cells not only decreased its activity, but decreased NMD, as well. The cells acted more like typical, non-disease cells when AKT was inhibited.

“Normalizing two major pathways that contribute to fragile X syndrome is an exciting development, and using a drug that has already been through early clinical trials and that has been shown to be safe in patients puts us a step ahead, as opposed to starting from scratch with a brand new molecule,” says Abshire, a postdoctoral fellow in the Maquat lab. “There is still a lot we don’t know about how AKT and NMD interact, because they are both massive pathways that influence and regulate multiple activities in cells, but this work provides good direction.”

Next steps in the research include taking drugs like Afuresertib and testing them in a mouse model of fragile X to determine if what the team found in cells (AKT goes down and NMD goes down) also occurs in a living organism.

Drilling down on disease mechanism

AKT is stimulated – or spurred into action – by insulin. This study is the first to show that extracellular signaling (something that happens outside the cell, like an increase in insulin) changes the identity of a mark called the exon junction complex or EJC. Discovered by Lynne E. Maquat, Ph.D., founding director of the Center for RNA Biology at the University of Rochester, the EJC promotes NMD when certain conditions are met. Cho and Abshire showed that AKT is unexpectedly a member of the complex of proteins that constitute the EJC, which is important for normal gene expression.

“By revealing a new mechanism by which AKT-signaling alters NMD and gene expression, we have a more complete understanding of disease mechanism. The more we know about this important signaling pathway, the more we can think about targets to suppress its hyperactivity,” said Maquat, corresponding study author and the J. Lowell Orbison Endowed Chair and Professor of Biochemistry and Biophysics at the University of Rochester School of Medicine and Dentistry. “This adds another aspect to how we can understand dysregulated pathways in diseases like fragile X and cancer when we are thinking about drugs.”

In the study, the team also details a new tool that they developed for screening potential drugs that inhibit NMD, which is hyperactivated in fragile X and a number of cancers.