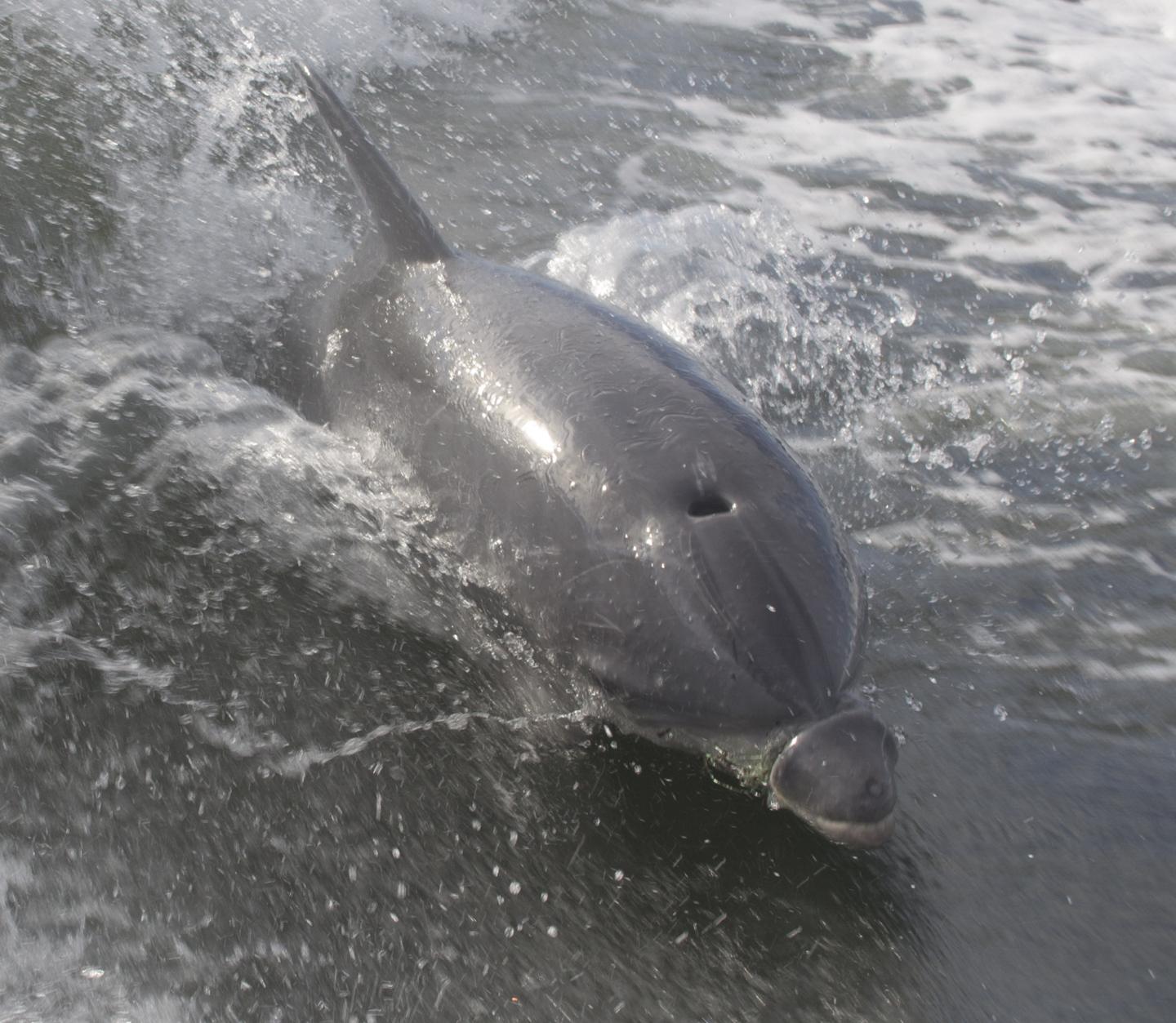 More than 1,000 bottlenose dolphins (Tursiops truncatus) live in the Indian River Lagoon year-round. The estuary system along the central east coast of Florida stretches about 250 kilometers and provides valuable shallow water habitat for this species. The lagoon also is popular for recreational fishing spots, which often coincide with bottlenose dolphin feeding habitats because they target the same species of fish. In fact, it very common to observe interactions between dolphins and recreational fishermen. These interactions include dolphins going after bait or captured fish, illegal feeding of dolphins, and dolphin encounters during release of undersized or non-targeted fish.

Unfortunately, free-ranging common bottlenose dolphins can become entangled in fishing line and other marine debris. Reports of entanglement include a variety of items such as crab trap lines, human clothing, spearfishing gear, Frisbees, box strapping, and other objects. Infrequently, dolphins can be successfully disentangled and released back into the wild. It is rare, however, to encounter a case that can be followed from physically handling the dolphin at a disentanglement event to later recovering its carcass, enabling pathologic descriptions after an entanglement wound has healed.

Researchers from Florida Atlantic University’s Harbor Branch Oceanographic Institute and collaborators from Earth Resources Technology, Inc., the National Marine Mammal Foundation, and Georgia Aquarium Conservation Field Station, conducted a case study to examine the outcome of an entangled bottlenose dolphin calf found in the Indian River Lagoon with monofilament fishing line wrapped tightly around its maxilla or upper jaw. A multi-agency team successfully disentangled the dolphin and immediately released it back into its natural habitat.

Because local bottlenose dolphin populations demonstrate site fidelity to the Indian River Lagoon, they are relatively easy to re-sight and monitor. The shallow, soft substrate in several inshore areas along the lagoon also allows for safe targeted capture and disentanglement efforts involving appropriately skilled biologists and veterinarians in cases where entanglements are deemed life threatening.

For the study, published in the journal BMC Veterinary Research, the researchers compared data collected on presentation during the disentanglement event to data later collected during re-sighting and necropsy. Results demonstrate long-term damage from the entanglement involving maxillary bones, dentition and soft tissues of the rostrum or snout. One year after disentanglement, photos and visual observations indicated that the now independent calf showed a decline in body condition, characterized by grossly visible ribs and a prominent post-nuchal depression, also known as “peanut-head,” a prominent depression behind the skull, which is indicative of poor nutritional condition.

More than two years post-disentanglement, the freshly dead carcass of this juvenile dolphin was recovered with extensive predation wounds. Despite the forestomach being about?50 percent full of fish, the dolphin was emaciated. During postmortem examination, researchers collected and evaluated detailed photographs and measurements of the maxillary damage resulting from the entanglement.

“Entanglements in cetaceans such as dolphins can impede movement and impair foraging abilities, leading to starvation, systemic infections, and debilitation from severe tissue damage, pain and distress, and in some cases, death,” said Annie Page-Karjian, D.V.M., Ph.D., assistant research professor and clinical veterinarian at FAU’s Harbor Branch, who co-authored the paper with Wendy Marks, program coordinator, and Steve Burton, M.S., program director of stranding and population assessment, who are all members of the marine mammals stranding, health and rehabilitation project team.

The monofilament entanglement caused permanent, bilateral deformation of the maxillary dental arcade, including a 4 to 4.2?centimeter long, 0.5?centimeter deep linear groove where the entanglement eroded the lateral edges of the maxilla. Entanglement in this 2-year-old dolphin did not cause bone fracture but did lead to bone deformity and maxillary malocclusion. External evidence of propeller scars and a fishing hook was discovered embedded in the laryngeal mucosa at necropsy, indicating repeated human interactions. The dolphin only survived for about two years after disentanglement and release.

“Educating fishermen about the importance of reeling in their lines when dolphins are present and proper disposal of fishing line can help reduce the risk of these interactions with bottlenose dolphins,” said Page-Karjian. “Less lost fishing gear and fewer injured or dead marine wildlife benefits everyone. While the quick response to disentangle this dolphin may have initially saved its life, prevention of learned fishery interaction behaviors could have prolonged his life beyond the two plus years that were gained.”

This work was supported by Protect Wild Dolphins License Plate Funds, granted through the Harbor Branch Oceanographic Institute Foundation. The disentanglement intervention was funded by National Marine Fisheries Services (NOAA Fisheries) through a contract with the University Corporation for Atmospheric Research (UCAR).