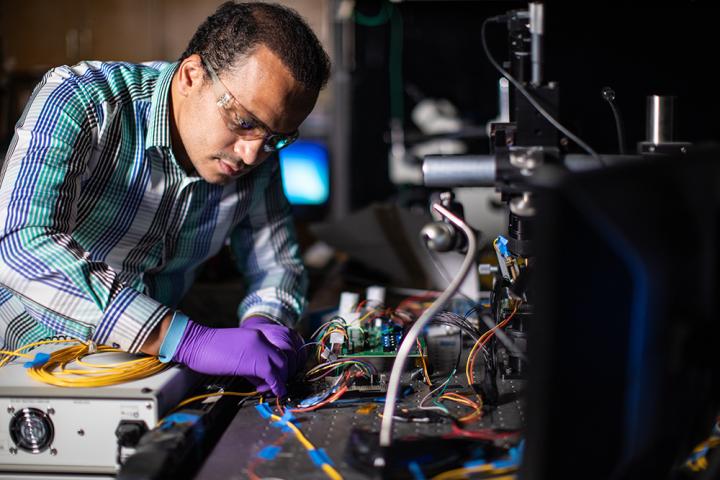 According to the United Nations’ telecommunications agency, 93% of the global population has access to a mobile-broadband network of some kind. With data becoming more readily available to consumers, there is also an appetite for more of it, and at faster speeds.

Ramy Rady, doctoral student in the Department of Electrical and Computer Engineering at Texas A&M University, is working with Dr. Kamran Entesari, his faculty advisor and professor, and Dr. Christi Madsen, professor, to design a chip that can revolutionize the current data rate for processors and technologies such as smartphones, laptops, etc. Dr. Sam Palermo, professor, is also involved with the project.

Photons are very fast – moving at the speed of light. By contrast, electrons move much slower at about 2,200 kilometers per second, which is less than 1% of the speed of light. By integrating photonic structures onto a silicon substrate by way of optics, Rady is taking advantage of the speed that photons provide while utilizing the features of existing electronic CMOS (Complementary Metal Oxide Semiconductor) technology to make silicon photonic integrated circuits.

Silicon photonic integrated circuits consume less power and generate less heat than conventional electronic circuits, which allows for an increase in data transmission. Previous work in this area was only conducted using optical processing. Rady and his team are moving toward the use of microwave photonics, which is a branch of optics that focuses on improving the quality of microwave signals using photonic structures. The advantage to Rady’s project over all previous solutions is its small size and high-speed operation, i.e. frequency and data rates.

“My prototype chip operates from 25 to 40 gigahertz, creating four channels each of a 5 gigahertz bandwidth,” Rady said. “This chip operates at a higher speed with a higher data rate than the previous generation of chips which relied on optical processing. The new chip is capable of reaching nearly five times the bandwidth compared to a contemporary cell phone.”

Rady explained that the motion of electrons is limited, and subsequently, the quality of energy that is sent and stored to your phone, for example, is also limited. This is where the integration of photons comes into play.

This project, which received funding from the National Science Foundation, has been featured in two papers published by Rady.