Doctoral dissertation: The Secret Gospel of Mark is not a fake 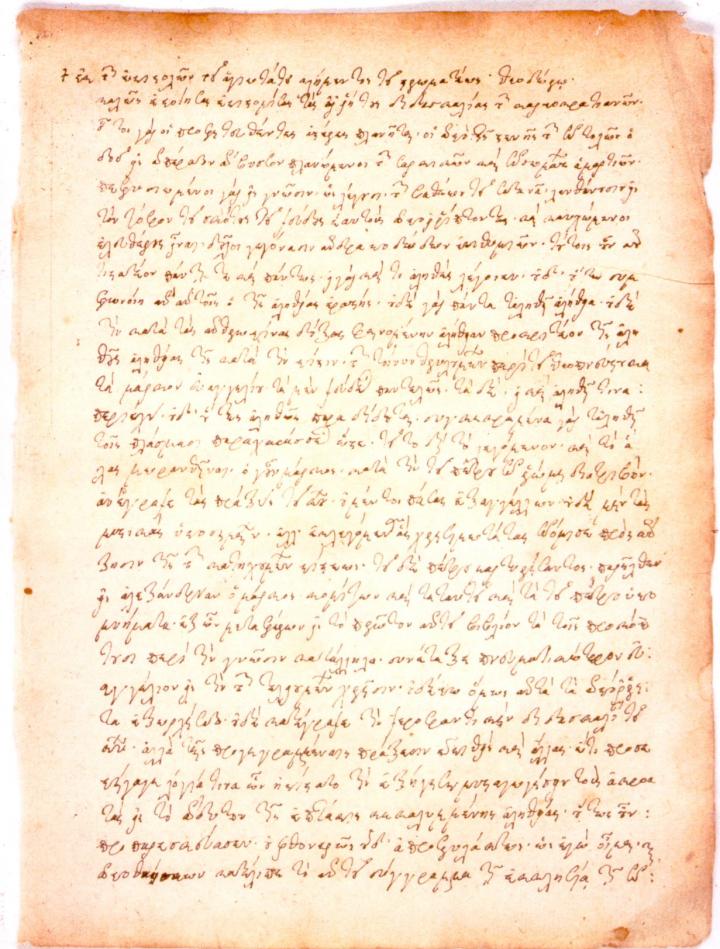 In his doctoral dissertation, Timo Paananen examines the letter by the early Christian philosopher Clement of Alexandria (ca. 150-215 CE) to Theodore. The identity of Theodore, recipient of the letter, remains a mystery. Clement instructs him, among other things, by quoting passages from the text known as The Secret Gospel of Mark.

Morton Smith (1915-1991), professor of ancient history at Columbia University, claimed to have discovered the letter in the Mar Saba monastery in 1958. Several biblical scholars have doubted the authenticity of the letter.

Paananen studied the debate over the forgery accusations related to The Secret Gospel of Mark and analysed the handwriting in Clement’s letter.

“The first passage from The Secret Gospel of Mark is a brief story about Jesus raising a rich young man from the dead. The youth is told to have started to ‘love’ Jesus and invited him to his home. After six days the young man came to Jesus wearing a linen cloth, and during the night Jesus taught him the mystery of the kingdom of God,” Paananen recounts the story.

Several esteemed scholars of early Christianity, Larry Hurtado, Birger Pearson, Bart Ehrman and Craig Evans among them, have argued powerfully in support of the forgery hypothesis. However, according to Paananen their argumentation falls short in significant ways.

“Suspicions of forgery have been fed by the way the manuscript disappeared into the library of the Greek Orthodox Patriarchate of Jerusalem as well as by Smith’s sensationalist theories of the historical Jesus, which contained both magical rites and homoeroticism.

“In Smith’s interpretation, Jesus was a magician who exploited hallucinations induced by hypnotic suggestion, when he took his disciples on the ascent into the heavens and presented them with the mystery of the Kingdom of God. To crown it all, Smith suggested that the ‘spiritual union’ described in The Secret Gospel of Mark may have been supplemented by a ‘physical union’,” Paananen continues.

However, according to his dissertation research, the text passages in Clement of Alexandria’s letter reveal that digital image processing has caused unintended corruption of the details in the handwriting. Additionally, a comparative study of handwriting shows that the handwriting in Clement’s letter does not contain what is known as “forger’s tremor” or other common indicators of forgery.

“Ignorance of standards of handwriting analysis used in forensic studies have misled also other researchers to take the handwriting of Clement’s letter as being forged by Smith,” the doctoral candidate surmises.

“The letter is a genuine text from antiquity, although it is difficult to ascertain if it was written by Clement himself, or perhaps by his student, Origen of Alexandria. In any case, The Secret Gospel of Mark that is quoted in the letter provides one example of the instability of texts in the canon of the New Testament Gospels. This instability has been created by changes in wordings and grammar, and even by cases of adding or removing entire episodes,” Paananen sums up.

According to Paananen, no generally accepted method for detecting forgeries has been established. Researchers may, among other things, justify their arguments for forgery by creating fictional stories to explain the details in the forgeries.

“Earlier, researchers may have given in to the temptation of developing wild theories of forgery based on imagined clues and codes. In addition, historians have had to assess forgeries on a case-by-case basis, and skilful counterfeits have led to long and heated debates,” Paananen says.

TM Timo Paananen will defend his doctoral dissertation entitled “A Study in Authenticity – Admissible Concealed Indicators of Authority and Other Features of Forgeries – A Case Study on Clement of Alexandria, Letter to Theodore, and the Longer Gospel of Mark” in the Faculty of Theology, University of Helsinki, on 29 May 2019.

The dissertation is also available in electronic form through the E-thesis service.

Epic research endeavor reveals cause of deadly digestive disease in…

In a first, researchers identify reddish coloring in an ancient fossil