Researchers at the Department of Ethology at Eötvös Loránd University, Hungary, measured the sleep of the dog’s wild counterpart, the wolf for the first time. Their new study was published in Scientific Reports. 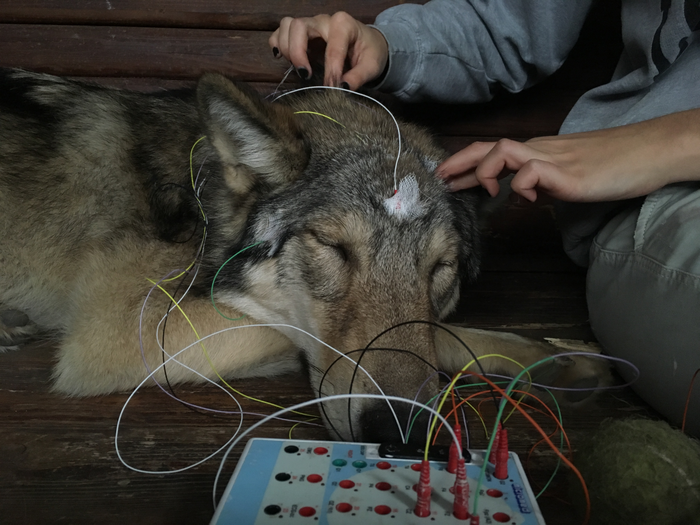 Researchers at the Department of Ethology at Eötvös Loránd University, Hungary, measured the sleep of the dog’s wild counterpart, the wolf for the first time. Their new study was published in Scientific Reports.

In the study, fully non-invasive EEG measurements were applied; a harmless procedure, attaching electrodes on the surface of the skin, similarly to human sleep EEG methods.

To gain a better understanding of the effects of domestication and cohabitation with humans on sleep phenotypes and physiology, comparing the dog to its wild counterpart,  the wolf, offers a unique opportunity.

“Although dog-wolf comparative studies have already been conducted in several areas of research, including behavioural and genetic studies, the neural processes of wolves remain a largely unexplored field” said Anna Bálint, researcher at the MTA-ELTE Comparative Ethology Research Group. “We measured the sleep EEG of seven hand raised, extensively socialised wolves, using the same methodology as has been applied in family dogs.  We successfully measured all sleep stages (drowsiness, deep sleep, and REM) that were previously observed in dogs as well.”

It may seem surprising that wolves can be measured by EEG the same way as our good old family pets, the dogs. However, by hand-raising and intensely socializing wolves from a very early age, they can be handled and comforted in much the same way as dogs. Wolves were surrounded by familiar people during the experiments, petting, caressing them until they calmed down, dozed off and eventually fell asleep. Whenever the wolves became aroused, the caretaker and experimenter calmed the wolves by praising and cuddling them until they settled again.

“While young dogs and wolves showed a pretty similar distribution of sleep stages, the time spent in REM seemed to be less in dogs than in wolves, and this difference is even more apparent in the senior animals”, describes the results the first author of the publication, Vivien Reicher, PhD student at the Ethology Department of ELTE. “This finding is especially intriguing since the amount of REM sleep has been linked to various different effects including neurodevelopment, stress, domestication, but also memory consolidation”, explains Reicher further.

“Although the sample size in the current study is low and the age distribution of the subjects is too skewed to draw comparative conclusions, it can be considered an important first step in collecting adequate amount of data to properly describe the wolf’s sleep” said Márta Gácsi, leader of this project, senior researcher at the MTA-ELTE Comparative Ethology Research Group. “Thus, we suggest that using our reliable, easily applicable methodology in different labs may form the basis of an international, multi-site collection of similar samples, allowing for generalizable scientific conclusions.”