Do most Americans believe in human-caused climate change?

It depends on how you ask: Three wording decisions can significantly alter estimates 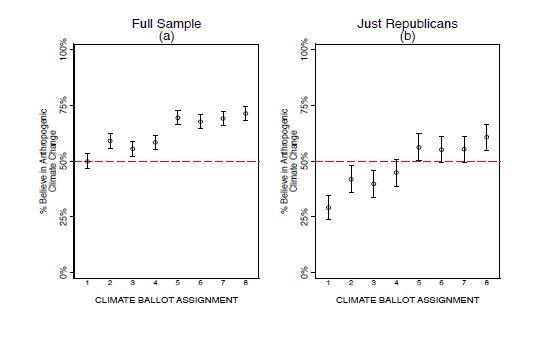 What percentage of Americans believe in human-caused climate change?

The answer depends on what is asked – and how. In a new study, researchers at the Annenberg Public Policy Center (APPC) of the University of Pennsylvania found that “seemingly trivial decisions made when constructing questions can, in some cases, significantly alter the proportion of the American public who appear to believe in human-caused climate change.”

“People’s beliefs about climate change play an important role in how they think about solutions to it,” said the lead author, Matthew Motta, one of four APPC postdoctoral fellows who conducted the study. “If we can’t accurately measure those beliefs, we may be under- or overestimating their support for different solutions. If we want to understand why the public supports or opposes different policy solutions to climate change, we need to understand what their views are on the science.”

The study, published in Climatic Change, is based on an online survey of 7,019 U.S. adults conducted from September 11-18, 2018, who were presented with questions in one of eight formats.

The study tested three variations in question format in different combinations, in which respondents were:

The researchers said that the differences show how question construction can produce widely varying reports about what the public purportedly thinks. But they cautioned that because the respondents in this study were not a representative sample of the U.S. adult population, the raw estimates can’t be read as definitively reflecting the acceptance of anthropogenic climate change (ACC).

While other differences in wording and question structure have been studied, the researchers said these three choices in format have not been examined closely. Questions that lack a hard “don’t know” response may nudge participants to pick a response that doesn’t reflect their lack of an opinion – and thereby inflate acceptance of human-caused climate change. Likewise, they said questions that use explanatory text may push respondents toward a greater acceptance.

However, they found that the most substantively and statistically significant increases in belief in climate change came from the use of an agree-disagree scale (so-called Likert-style response options) instead of distinct choices in response. In other fields, the researchers wrote, the agree-disagree format has been shown to introduce acquiescence bias, which occurs when respondents “agree” with a statement in order to “avoid thinking deeply about the matter at hand” or “avoid appearing disagreeable to the interviewer…”

“We find evidence that questions featuring Likert-style response options tend to produce higher levels of belief in ACC than those offering discrete choices,” the researchers said. In the case of self-identified Republicans, the researchers suggested that the agree-disagree scale and absence of an alternate series of positions to choose from may have presented them with “more difficulty identifying and selecting the party’s stance on the issue.”

The researchers said that they found no differences in the way that these question format changes affected Republicans and Democrats. “We hope that our research can help to broadly raise awareness of measurement issues in the study of climate change opinion and alert scholars to which specific design elements are most likely to impact opinion estimates,” the researchers said.

They added that additional research is needed to understand the psychological mechanisms underlying the effects seen here.

The Annenberg Public Policy Center was established in 1993 to educate the public and policy makers about the media’s role in advancing public understanding of political, health, and science issues at the local, state and federal levels. Follow APPC on Twitter and Facebook.

Being overweight as a teen may be associated with cardiomyopathy in…