A team of physicists working at the intersection of theory and experiment are shedding new light on the “teamwork” of molecular motors—called RNA polymerases (RNAPs)—that mediate DNA transcription. During transcription, the first step in gene expression, RNAPs “read” DNA sequences and assemble messenger RNA (mRNA), which in turn serves as the template for the proteins necessary for life. 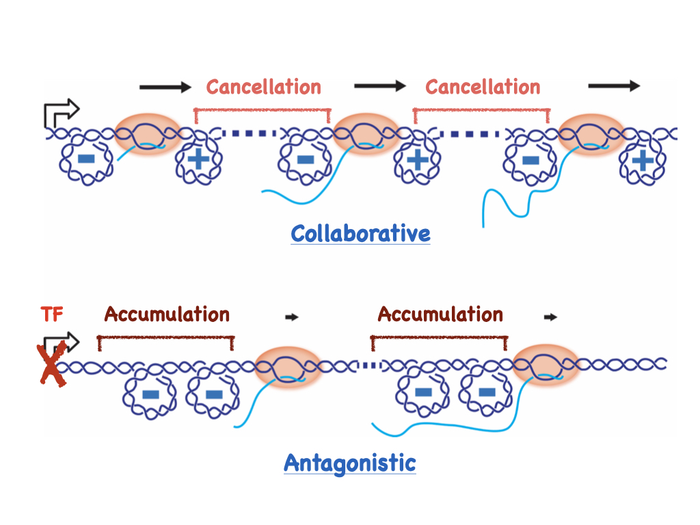 A team of physicists working at the intersection of theory and experiment are shedding new light on the “teamwork” of molecular motors—called RNA polymerases (RNAPs)—that mediate DNA transcription. During transcription, the first step in gene expression, RNAPs “read” DNA sequences and assemble messenger RNA (mRNA), which in turn serves as the template for the proteins necessary for life.

The team—comprising lead author Purba Chatterjee , a recent Illinois Physics Ph.D. graduate, now a postdoctoral researcher at University of Pennsylvania; Illinois Physics Emeritus Research Professor Nigel Goldenfeld, now the Chancellor’s Distinguished Professor of Physics at University of California San Diego; and Illinois Physics Professor Sangjin Kim—introduces a new theoretical model elucidating how the mechanism of supercoiling in DNA underlies the collective dynamics of RNAPs that are concurrently translocating on the DNA for transcription. The RNAPs dynamics switch from cooperative to antagonistic mode, in response to the cell’s needs.

These findings were published on November 16, 2021,in the article “DNA Supercoiling Drives a Transition between Collective Modes of Gene Synthesis,” in the journal Physical Review Letters.

Goldenfeld explains, “Supercoiling is something familiar to anyone who has wrestled with a garden hose or, in times past, a telephone cord. Semi-rigid tubes or, in this case, helices are difficult to fold and they bend into localized tangles—loops that can look like figure eights or worse. Biology battles with the same geometrical issues at the DNA molecular level within living cells.”

Previous experimental and theoretical studies have predicted that the speed at which RNAPs translocate along the DNA during transcription increases with the number of RNAPs actively transcribing the same sequence, but in 2019, Kim, et al. observed for the first time that the speed of RNAP translocation remains high as long as RNAPs initiate transcription at a rate above a certain threshold, regardless of the total number. Surprisingly, they found that the number of RNAPs affected the speed once the promoter is turned off—that is when RNAPs stop initiating transcription. In the current work, the team describes how supercoiling underlies these collective effects.

The scientists modelled the biological system in which multiple RNAPs are transcribing the same segment of DNA, with RNAP translocation speed subject to torques generated by DNA supercoiling.

Chatterjee explains, “Our model introduces two important factors that have not been considered before for DNA supercoiling. First, the number of RNAPs is important. The more RNAPs there are, the harder it is for individual RNAPs to twist the DNA. This is because the mass of each RNAP as well as the mass of the mRNA being synthesized by each RNAP adds to the resistance of DNA to twisting. This is similar to the real-life observation that a thick, heavy rubber band is harder to twist than a thin, light one.

With these two novel considerations, the researchers found that DNA supercoiling produced by RNAP motion can drive the two contrasting modes of RNAP group dynamics. Cooperative dynamics emerge under conditions favorable to transcription, when the promoter sequence at the start of the DNA segment is “turned on.” In this mode, the mechanics of supercoiling diffusion facilitate quicker transcription across the entire system, because each RNAP cancels its nearest neighbor’s DNA supercoils effectively, leading to optimal high speeds for each.

Kim adds, “Notably, the mechanics of supercoiling diffusion allow for the cancellation of supercoils for all RNAP densities, and hence the cooperative dynamics can be observed as long as the RNAP densities are over a certain threshold.”

Chatterjee explains, “Despite the cost associated with having many RNAPs on the gene, the collective mode enhances transcription speed. This is contingent on continuous loading of RNAPs, meaning there is an active promoter that is loading RNAPs onto the gene uninterrupted. The continuous loading of RNAPs takes place when the cell wants to make as many transcripts as possible. The cooperation between RNAPs during their translocation helps to accomplish the cell’s need.”

A switch to antagonistic dynamics, on the other hand, slows translocation for all active RNAPs—now, the multiple RNAPs transcribing a gene together actually impair each other’s motion and transcription is soon shut down altogether.

Kim adds, “Whereas, in the cooperative mode, having a neighbor leads to better cancellation of supercoils and helps to reduce the torsional stress on an RNAP such that it can move at the optimal speed, in the antagonistic mode, having a neighbor is devastating. In this collective mode, the presence of multiple RNAPs results in greater torsional stress and greater reduction in speed. This antagonistic mode takes place when the promoter is turned off—the entry is blocked by a transcription factor—in response to a signal to stop making transcripts.”

Chatterjee sums up, “Our theoretical model supports Sangjin’s experimental observation and explains the finding from the physical perspective of DNA supercoiling.”

Goldenfeld adds, “Our modeling and Sangjin’s ingenious experiments reveal how the molecular machines known as RNA polymerase essentially communicate and work cooperatively in the processes that ultimately lead to the manufacture of proteins. This exciting project would not have been possible without deep collaboration between theoretical modeling and experiment, and shows how collective phenomena, already well understood in statistical and condensed matter physics, also underpin the most fundamental aspects of biological gene expression.”

Kim looks forward to continuing this line of research in the laboratory.

“There are a number of exciting future experiments to do,” she says. “We want to experimentally validate the two novel features introduced in the model by visualizing DNA supercoiling and measuring the DNA resisting torques directly. Specifically, we want to test the effect of transcription factors on transcription efficiency through the blocking of DNA supercoil diffusion and measure the effect of the presence of multiple RNAPs on the restoring torque experienced by an individual RNAP.”

This work was supported by the National Science Foundation, the National Institutes of Health, the Searle Scholars Program, and a Drickamer Research Fellowship of the University of Illinois Urbana-Champaign’s Department of Physics. The conclusions presented are those of the researchers and not necessarily those of the funding agencies.