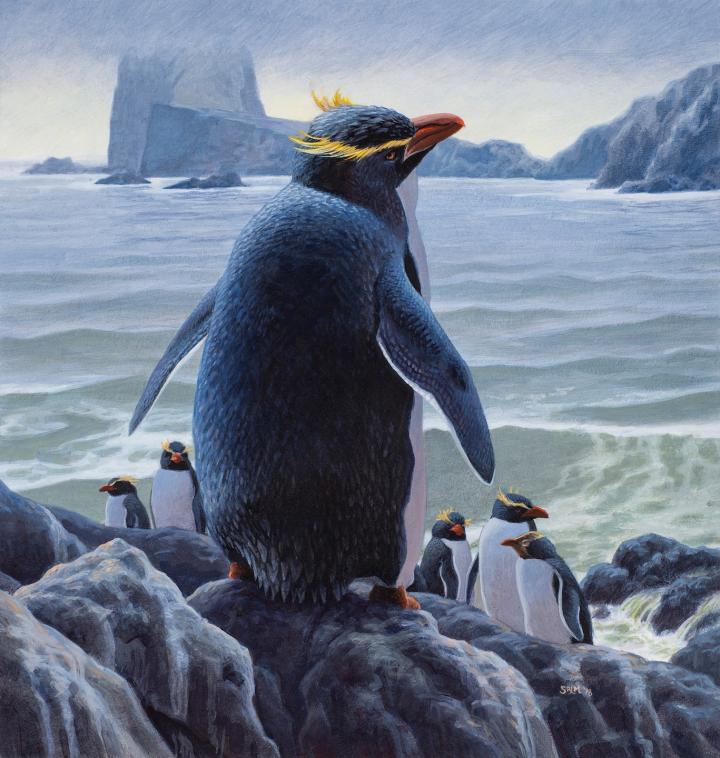 New University of Otago research has improved our understanding of when and why penguins evolved, and has identified two recently extinct penguins from New Zealand’s remote Chatham Islands.

In the study, published online today in the scientific journal Molecular Biology and Evolution, an international team of researchers sequenced mitochondrial genomes from all living and recently extinct penguin species. By analysing the genetic relationships of species, and using ancient fossil penguins to put a time scale on these, the team showed that many penguin species arose soon after the geological formation of islands, including those inhabiting the Antipodes and Chatham Islands, Macquarie Island, Gough Island and Galápagos Islands. http://dx.doi.org/10.1093/molbev/msz017

Lead author of the study, Otago University PhD candidate Theresa Cole, says: “From an evolutionary perspective, it’s fascinating to understand how and why species evolve. We were able to provide a comprehensive framework for exploring these questions about penguins, and demonstrated for the first time that islands may have played a key role in penguin evolution.”

The study, which included sequencing DNA and examining hundreds of prehistoric bones across New Zealand, also confirmed that a now extinct, unique crested penguin species existed on the Chatham Islands until a few centuries ago.

The former existence of this species had long been suspected by study co-author Alan Tennyson of Te Papa, who had previously examined penguin bones from these islands. However the study also threw up a complete surprise – revealing that a previously unknown small subspecies of yellow-eyed penguin also once existed on the Chatham Islands.

Study authors, including Cole, Tennyson, Daniel Thomas from Massey University, Dan Ksepka from the US Bruce Museum, named the two new penguins Eudyptes warhami and Megadyptes antipodes richdalei in honour of John Warham and Lance Richdale, who carried out pioneering studies on penguins in New Zealand.

“Evidence suggests Eudyptes warhami and Megadyptes antipodes richdalei inhabited the Chatham Islands up until the last few hundred years, and became extinct only after humans arrived,” Cole says. “The discovery of these two new penguins adds greatly to our understanding of how humans impacted New Zealand’s marine biodiversity in the past.”

“The more we learn about New Zealand’s past ecosystems, the more we realise how dramatically they have changed since human arrival.” says Otago Professor Jon Waters, who helped supervise the study.

This new study follows another led by Cole and published recently in the journal Molecular Phylogenetics and Evolution, which used ancient DNA to show that prehistoric penguin bones from New Zealand included several species that no longer breed there. The link to that paper is here: https://www.sciencedirect.com/science/article/pii/S1055790318306274

The researchers are now extending the study by sequencing whole genomes to explore penguin evolution and adaptation.

Please note: The image attached with this release is an original artwork created to mark this research.

Artist: Sean Murtha. The painting shows Eudyptes warhami in the foreground, with Megadyptes antipodes richdalei in the background.

Improving the body’s ability to fight cancer and intruders