The Grim Reaper arrives for each of us eventually — wouldn’t it be nice to know when? Now UCLA researchers have developed a new tool to help you plan ahead for your date with the Angel of Death 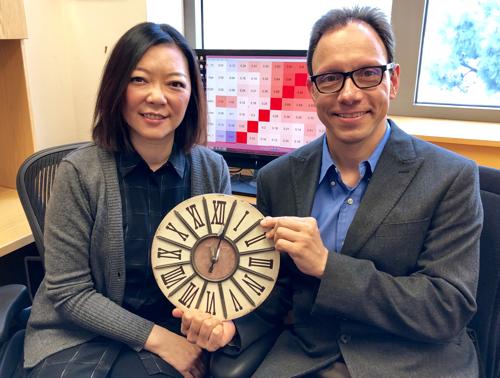 The Grim Reaper arrives for each of us eventually–wouldn’t it be nice to know when? Now UCLA researchers have developed a new tool to help you plan ahead for your date with the Angel of Death.

Named after the grim reaper, the biomarker known as DNA methylation GrimAge, allows one to predict lifespan and healthspan, and to test potential interventions that may slow or perhaps even reverse biological aging. The journal Aging publishes the findings.

Ake Lu and Steve Horvath from the Department of Human Genetics at the David Geffen School of Medicine University of California Los Angeles in Los Angeles, California, USA explain “When it comes to predicting lifespan, GrimAge is 18% more accurate than calendar age and 14% better than previously-described epigenetic biomarkers. With regards to predicting time to coronary heart disease, GrimAge is 61% more accurate than chronological age and 46% better than previously-reported epigenetic biomarkers. In spite of this significant enhancement however, it must be noted that neither age nor DNAmGrimAge is particularly good at predicting time to heart disease.”

The DNAmGrimAge biomarker measures an individual’s risk of mortality by analyzing positions on the DNA where methyl groups change with age. These positions are analysed by applying DNA from blood onto a “chip”, which measures the degree of their methylation, which is valued between 0 and 1″ first author Ake Lu explains. “Over a thousand such specific positions are monitored by DNAGrimAge which combines these values into an age estimate called GrimAge. If you fall within the top 5 percent of the fastest “agers”, your risk of death is sadly more than twice that of the average person. If however, you are within the bottom 5 percent of slowest agers, then happily, your risk is only half that of the average person.

GrimAge is able to do this because the methylation positions that it uses to predict are those that track the levels of blood proteins that are known to be associated with health, as well as those that are associated with smoking history. It is well-established that smoking history is a good predictor of lifespan, but it is intriguing that the DNA methylation-based estimator of smoking history is an even better predictor of lifespan than self-reported smoking history. This may indicate that while we can be economical with the truth about how much we smoke, we will in the end be caught out by our own DNA, in more ways than one.

This article also demonstrates that lean people with fatty liver and excess visceral fat are epigenetically older than obese people who do not have fatty liver. This does not give a thumbs-up to obesity. Instead it highlights the fact that avoiding obesity is only one side of the health coin. There is a need to also ensure that fat is not accumulated in excess, in the wrong places and even in places that we cannot see. Not surprisingly, life-style factors and diet emerge once again as important health factors, as omega-3 polyunsaturated fatty acid supplementation and vegetable consumption appear to be associated with lower GrimAge. This association, which was made from an observational study requires further validation from prospective clinical trials, before any advice to pop omega-3 pills is considered.

Software availability – DNAmGrimAge, DNAm based estimators of smoking packyears and many other epigenetic biomarkers are implemented in the new version of the online epigenetic clock software: https://dnamage.genetics.ucla.edu/new

Launched in 2009, Aging publishes papers of general interest and biological significance in all fields of aging research as well as topics beyond traditional gerontology, including, but not limited to, cellular and molecular biology, human age-related diseases, pathology in model organisms, cancer, signal transduction pathways (e.g., p53, sirtuins, and PI-3K/AKT/mTOR among others), and approaches to modulating these signaling pathways.

Aging is published by Impact Journals

Scienmag Jun 20, 2019
Credit: The University of Texas at Arlington There are 15 new cases of amyotrophic lateral sclerosis, or ALS,…

When it comes to planetary habitability, it’s what’s…

Upgrade of the IceCube neutrino telescope