To understand soil ecosystems and contribute to advanced agriculture 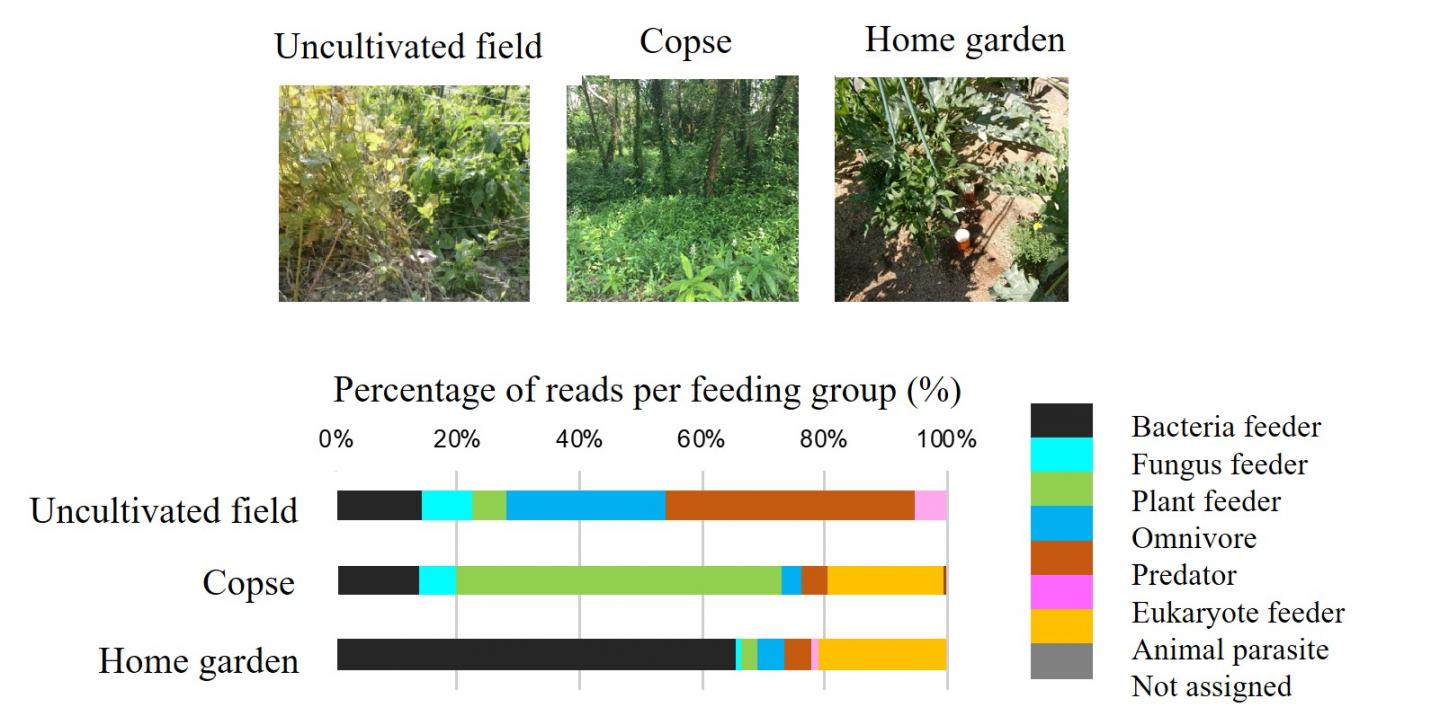 The research team of Professor Toshihiko Eki of the Department of Applied Chemistry and Life Science (and Research Center for Agrotechnology and Biotechnology), Toyohashi University of Technology used a next-generation sequencer to develop a highly efficient method to analyze soil nematodes by using the 18S ribosomal RNA gene regions as DNA barcodes. They successfully used this method to reveal characteristics of nematode communities that inhabit fields, copses, and home gardens. In the future, the target will be expanded to cover all soil-dwelling organisms in agricultural soils, etc., to allow investigations into a soil’s environment and bio-diversity. This is expected to contribute to advanced agriculture.

Similar to when the UN declared 2015 to be the International Year of Soils, there have recently been many efforts worldwide to raise awareness of the importance of the soil that covers our Earth and its conservation. Diverse groups of organisms such as bacteria, fungi, protists, and small soil animals inhabit the soil, and together they form the soil ecosystem. Nematodes are a representative soil animal; they are a few millimeters long and have a shape resembling a worm. They play an important role in the cycling of soil materials. Many soil nematodes are bacteria feeders, but they have a wide variety of feeding habits, such as feeding on fungi, plant parasitism, or being omnivorous. In particular, plant parasitic nematodes often cause devastating damage to crops. Therefore, the classification and identification of nematodes is also important from an agricultural standpoint. However, nematodes are diverse, and there are over 30,000 species. Additionally, because nematodes resemble one another, morphological identification of nematodes is difficult for anyone but experts.

The research team focused on “DNA barcoding” to identify the species based on their unique nucleotide sequences of a barcode gene, and they established a method using a next-generation sequencer that can decode huge numbers of nucleotide sequences. They used this to analyze nematode communities from different soil environments. Initially, four DNA barcode regions were set for the 18S ribosomal RNA genes shared by eukaryotes. The soil nematodes used for analysis were isolated from an uncultivated field, a copse, and a home garden growing zucchini. The PCR was used to amplify the four gene fragments from the DNA of the nematodes and determine the nucleotide sequences. Additionally, the nematode-derived sequence variants (SVs) representing independent nematode species were identified, and after taxonomical classification and analysis of the SVs, it was revealed that plant parasitizing nematodes were abundant in the copse soil and bacteria feeders were abundant in the soil from the home garden. It was also determined that predatory nematodes and omnivorous nematodes were abundant in the uncultivated field, in addition to bacteria feeders.

This DNA barcoding method using a next-generation sequencer is widely used for the analysis of intestinal microbiota, etc., but analyses of eukaryotes such as nematodes are still in the research stage. This research provides an example of its usefulness for the taxonomic profiling of soil nematodes.

Research team leader Toshihiko Eki stated, “Through genetic research, I have been working with nematodes (mainly C. elegans) for around 20 years. As a member of our university’s Research Center for Agrotechnology and Biotechnology, I came up with this theme while considering research that we could perform that is related to agriculture. As a test, we isolated nematodes from the university’s soybean field and unmanaged flowerbed and analyzed the DNA barcode for each nematode. Bacteria feeders were abundant in the soybean field, and that was used for comparison with the flowerbed, where weed-parasitizing nematodes and their predator nematodes were abundant. This discovery was the start of our research (Morise et al., PLoS ONE, 2012). If that method using one-by-one DNA sequencing was the first generation, the current method using the next-generation sequencer is the second generation, and we were able to clarify characteristics of nematode communities representing the three ecologically different soil environments according to expectations.”

Currently, the research team is developing the third-generation DNA barcoding method which involves purifying DNA directly from the soil and analyzing the organisms in the whole soil instead of isolating and analyzing any particular soil-dwelling organisms. They are currently analyzing the soil biota of cabbage fields, etc. They are aiming to precisely analyze how communities of soil-dwelling organisms including microbes change with crop growth, clarify the effects that cultivated plants have on these organisms, and investigate biota closely related to plant diseases. If this research moves forward, crops can be cultivated and managed logically based on biological data in agricultural soils, and it can contribute to advancing smart agriculture in Japan, such as in the prominent Higashi-Mikawa agriculture region and beyond.

This research was performed with the support of the Takahashi Industrial and Economic Research Foundation.