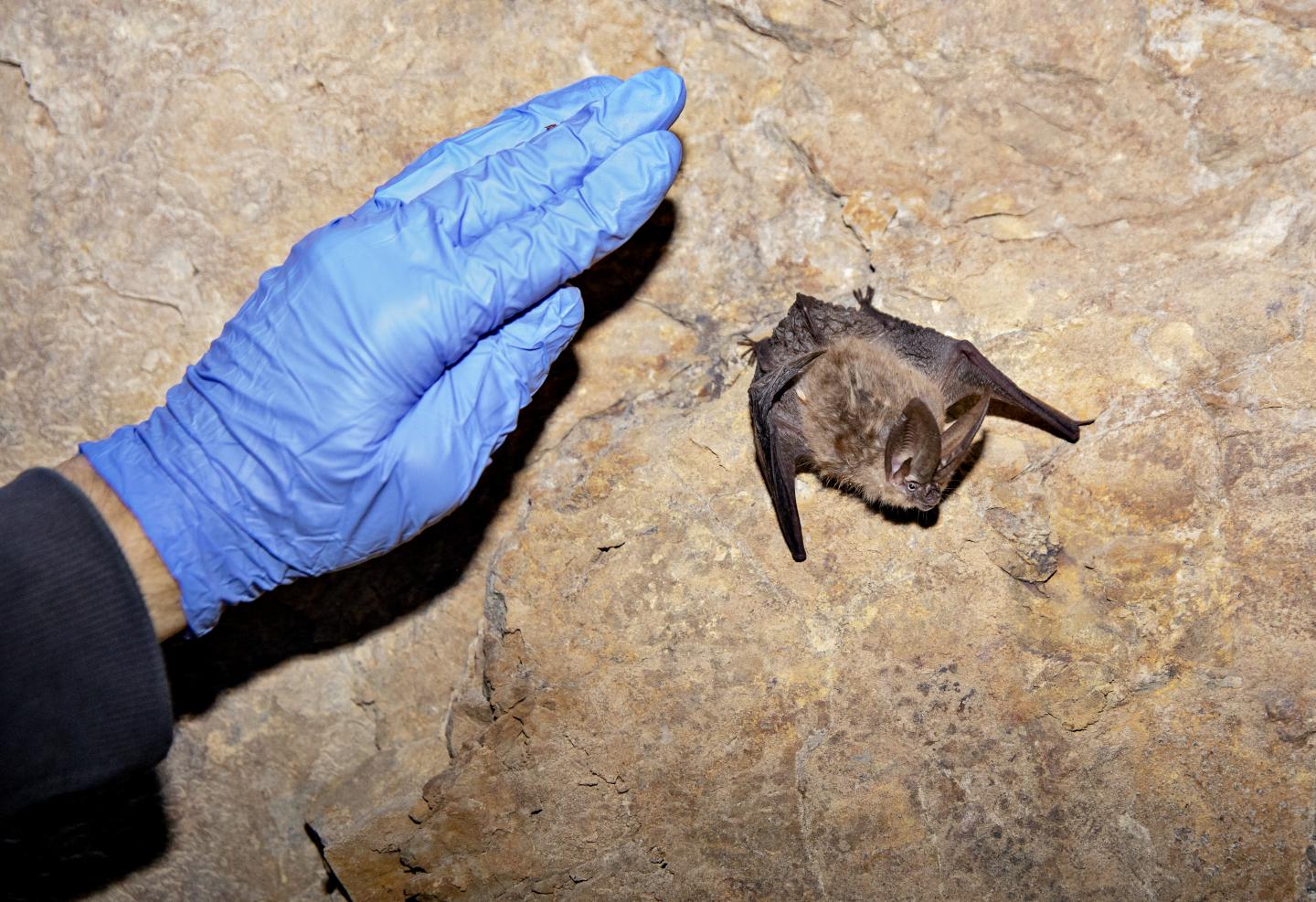 Since it was first detected in 2006, white-nose syndrome has killed millions of bats in eastern and central North America. The spread of the fungal pathogen that causes white-nose syndrome in hibernating bats has reached several western U.S. states, mostly likely through bat-to-bat spread, and is presently threatening western species.

Bats with white-nose syndrome have fungus growing on their nose and wings, as the name implies, but the fungal infection also triggers a higher frequency of arousals from hibernation. Each arousal involves an increase in body temperature from as low as near freezing (when bats use torpor) to an active mammalian body temperature (~98?F or 38?C), which uses a significant amount of energy. Bats have limited fat stored for the winter, and if this is used up before the end of winter, death by starvation occurs.

The researchers’ aim was to provide managers with information on which western bat species may suffer high mortality and extinction risk if infected with the disease. To do so they combined an unprecedented field data collection effort with a mechanistic model that explains how energy is consumed during hibernation and how the causal fungus impacts this energy consumption. By comparing their new knowledge of how long bats infected with white-nose syndrome could hibernate against the duration of winter that they would need to hibernate with the disease, the authors predicted survival outcomes for each species. If a bat did not have sufficient energy to live beyond the duration of winter the simulation recorded a mortality.

Three years of intensive fieldwork resulted in 946 bat captures (all released after measuring). Bat energetic measurements paired with hibernaculum environmental data were gathered for nine species that were sampled at eight sites scattered throughout the West (see Figure A). The researchers then assessed how the arrival of white-nose syndrome might affect hibernation energy use, and subsequently each species’ ability to survive hibernation with the disease. Combining data on the host, the environment they select for hibernation, and how the pathogen grows at different temperature and humidity conditions the authors simulated how many days infected populations could hibernate under field conditions.

Dr. Catherine Haase, now Assistant Professor of Biology at Austin Peay State University and the study’s lead author said: “Our results indicate the need to take a holistic view on conservation, as it is not just one thing that determines survival from white-nose syndrome, but rather the combination of bat, environment, and disease variables.”

All of the western bat species studied were insectivores, meaning they prey on insects, including those that are pests to agricultural crops. In addition to providing valuable ecosystem services, they are incredibly fascinating species, from their ability to echolocate to their unique immune system.

Dr. Sarah Olson, Wildlife Conservation Society Health Program co-author and project Principle Investigator said: “This study demonstrates the value of collecting baseline data to pre-emptively understand a threat posed by a wildlife disease, like white-nose syndrome, to western bats, so that more proactive conservation measures can be taken to protect these species. Here, an all hands on deck approach is needed. Western states can take steps now to put protections in place before anticipated severe declines are observed, like reducing habitat loss and restricting access to hibernacula, as well as investing in research and surveillance.”

About the WCS (Wildlife Conservation Society)

The Wildlife Conservation Society (WCS) is a US non-profit, tax-exempt, private organization established in 1895 that saves wildlife and wild places by understanding critical issues, crafting science-based solutions, and taking conservation actions that benefit nature and humanity. With more than a century of experience, long-term commitments in dozens of landscapes, presence in more than 60 nations, and experience helping to establish over 150 protected areas across the globe, WCS has amassed the biological knowledge, cultural understanding and partnerships to ensure that vibrant, wild places and wildlife thrive alongside local communities. Working with local communities and organizations, that knowledge is applied to address species, habitat and ecosystem management issues critical to improving the quality of life of poor rural people whose livelihoods depend on the direct utilization of natural resources. WCS was the first conservation organization with a dedicated team of wildlife veterinarians and other health professionals deployed around the world. The WCS Health Program is central to delivering on our mission to save wildlife and wild places around the globe. Wildlife, livestock, and human diseases will likely have a significant impact on the future development of sustainable land uses, protected areas, transboundary natural resource management, other biodiversity conservation approaches, and livelihood opportunities in many of the landscapes and seascapes where we work. Our work at the interface of wildlife, domestic animal, and human health has demonstrated that a One Health approach can build new constituencies for conservation and strengthen existing ones, while mitigating a key threat to conservation. Today, WCS Health Programs are globally recognized for excellence in zoological and wildlife medicine, pathology, and global health conservation initiatives. Visit: newsroom.wcs.org Follow: @WCSNewsroom. For more information: 347-840-1242.

Austin Peay State University (APSU; apsu.edu) is a moderately-sized state university located in middle Tennessee. APSU serves a large population of diverse students with several degree options at the associates, bachelor’s, master’s and doctoral levels. Many of these degrees can be pursued on campus and online. APSU is home to the state’s only Center of Excellence for Field Biology, which enables students to work with professional field biologists in the study of mammals, insects, fish, plants and more.

About WCS Canada
Wildlife Conservation Society (WCS) Canada was incorporated as a conservation organization in Canada in 2004. The mission of WCS Canada is to conserve wildlife and wild places by understanding the issues, developing science-based solutions, and working with others to carry out conservation actions across Canada. WCS Canada is distinguished from other environmental organizations through their role in generating science through field and applied research, and by using results to encourage collaboration among scientific communities, organizations and policy makers to achieve conservation results.

A new era of excellence is dawning at Texas Tech University as it stands on the cusp of being one of the nation’s premier research institutions. Research and enrollment numbers are at record levels, which cement Texas Tech’s commitment to attracting and retaining quality students. In fall 2020, the university achieved a goal more than a decade in the making, reaching a total student population of more than 40,000. In 2018, the Carnegie Classification of Institutions of Higher Education again placed Texas Tech among its top doctoral universities in the nation in the “Very High Research Activity” category. Texas Tech is one of 94 public institutions nationally and 131 overall to achieve this prestigious recognition. Quality students need top-notch faculty. Texas Tech is home to a diverse, highly revered pool of educators who excel in teaching, research and service. The university strives to foster an environment that celebrates student accomplishment above all else. Texas Tech is large enough to provide the best in facilities and academics but prides itself on being able to focus on each student individually.

The momentum for excellence at Texas Tech has never been greater.

Montana State University is a public university located in Bozeman, Montana. It was founded in 1893 as the state’s land-grant institution and prides itself on its tripartite mission of excellence in teaching and learning, research and creative projects and outreach and service. With an enrollment of more than 15,600 students, MSU is the largest university in the state. It is also the largest research university in Montana and the largest research and development entity of any kind in Montana, with annual research expenditures typically exceeding $100 million annually. Through its colleges, MSU offers baccalaureate degrees in more than 50 fields, master’s degrees in more than 40 fields, and doctoral degrees in approximately 20 fields. To learn more, visit http://www.montana.edu/.

Massey University is New Zealand’s largest and most influential educational institution with around 32,500 students. It calls itself New Zealand’s defining university because its areas of specialized teaching and world-class research reflect what New Zealand and New Zealanders are best known for – agrifood innovation and the associated disciplines such as public health, animal welfare, farming and food technology, design, creative arts, social sciences, and business. It has five colleges (faculties), around 3000 full-time equivalent staff and the nation’s largest university-based distance education program, allowing students to study from anywhere in the world.

Conservation Science Partners (CSP; csp-inc.org) is a nonprofit scientific collective established to meet the analytical and research needs of diverse stakeholders in conservation outcomes on public and private lands. The mission of CSP is to apply human ingenuity to the preservation of species, populations, and ecosystems using scientific principles, innovative approaches, and lasting partnerships with conservation practitioners. CSP connects the best minds in conservation science to solve environmental problems in a comprehensive, flexible, and service-oriented manner. The core capabilities of CSP span a wide spectrum of geospatial and statistical techniques, from custom ecological and environmental data development (GIS and remote sensing based) to advanced analyses of landscape patterns and changes at multiple spatial and temporal scales.