The team led by Dr. Mun Ji-young of KBRI publishes its research results in PNAS 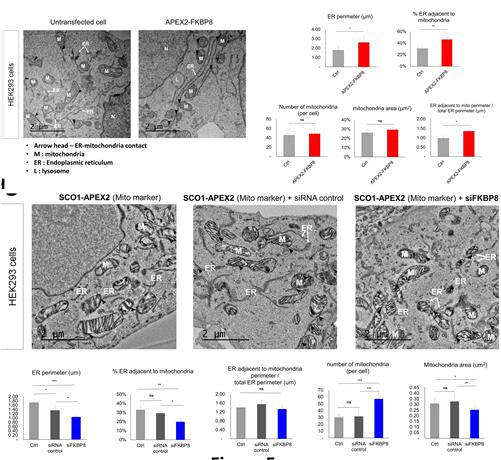 Korea Brain Research Institute (KBRI headed by Suh Pann-ghill) announced on the 2nd that the joint research team of KBRI (team led by Dr. Mun Ji-young), Seoul National University, and Pohang University of Science and Technology discovered the proteins that engage in the formation of MAM*, which is the cellular signaling hub.

The research results were published in the May issue of the leading scientific journal Proceedings of the National Academy of Sciences of the United States of America, and the paper title and authors are as follows.

Diverse organelles exist in living cells, which serve their own functions and communicate with each other via membrane contact sites. In particular, proteins localized at MAMs, which are the most critical cellular contact sites of mitochondria* and ER*, engage in key functions such as lipid metabolism and autophagy.

* Mitochondria: A type of organelle that powers the cell’s metabolic activities in the form of ATP

* Endoplasmic reticulum (ER): A type of organelle that produces proteins and delivers them to cells

When mitochondria and ER come into contact with each other, MAM is formed to facilitate calcium transport. If an excessive amount of calcium is transported into mitochondria, it compromises its functioning and leads to the onset of disease. MAM has recently emerged as the center of attention after its role as a cellular signaling hub was discovered. In fact, genetic degeneration has been detected in the MAM of many patients suffering from degenerative neural diseases.

The joint research team invented a new technique (Contact-ID) for labeling and analyzing proteins localized at MAM and identified 115 MAM-specific proteins within live human cells through this technique.

Up until now, the centrifuge method has mainly been used to analyze the structure of MAM-specific proteins. However, this method had the disadvantages of excessive noise generated during the splitting process and low efficiency. The team’s newly invented technique overcomes such challenges.

The large area-3D scanning electron microscopy (SEM) adopted by KBRI last year was also used to observe three-dimensional MAM structure within cells. As a result, it was discovered that FKBP8, an outer mitochondrial membrane (OMM) protein, facilitates the creation of MAM connecting mitochondria and ER and plays an instrumental role in calcium transport.

This study is significant in that it discovered proteins capable of regulating an increase in mitochondrial calcium, which is now known as a common cause of neurodegenerative diseases. This study is expected to be utilized as a new milestone in developing treatment options for Alzheimer’s disease, Parkinson’s disease, etc., in the future.

Dr. Mun Ji-young, a joint corresponding author, and Dr. Jung Min-kyo, a joint author, of KBRI said, “Diseases occur when inter-organelle communication is hindered or disturbed. We succeeded in more accurately identifying MAM-specific proteins that engage in this process.”

They added, “We conducted joint research on the functions of FKBP8 from among the identified proteins. Our follow-up study will be targeted at its activities as a key factor for delaying or preventing damage to mitochondria.”