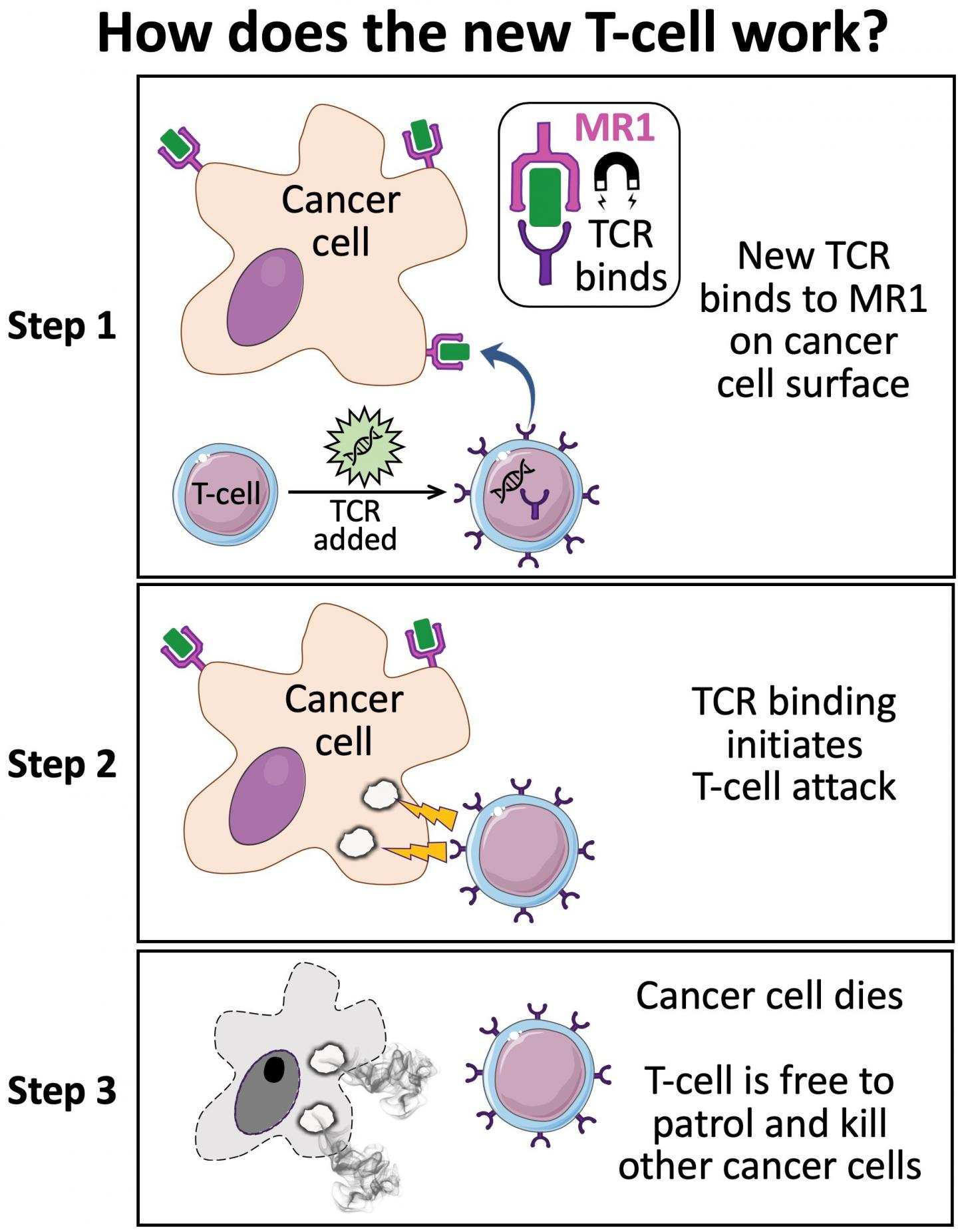 Researchers at Cardiff University have discovered a new type of killer T-cell that offers hope of a “one-size-fits-all” cancer therapy.

T-cell therapies for cancer – where immune cells are removed, modified and returned to the patient’s blood to seek and destroy cancer cells – are the latest paradigm in cancer treatments.

The most widely-used therapy, known as CAR-T, is personalised to each patient but targets only a few types of cancers and has not been successful for solid tumours, which make up the vast majority of cancers.

This TCR recognises a molecule present on the surface of a wide range of cancer cells as well as in many of the body’s normal cells but, remarkably, is able to distinguish between healthy cells and cancerous ones, killing only the latter.

How does this new TCR work?

Conventional T-cells scan the surface of other cells to find anomalies and eliminate cancerous cells – which express abnormal proteins – but ignore cells that contain only “normal” proteins.

HLA varies widely between individuals, which has previously prevented scientists from creating a single T-cell-based treatment that targets most cancers in all people.

But the Cardiff study, published today in Nature Immunology, describes a unique TCR that can recognise many types of cancer via a single HLA-like molecule called MR1.

Unlike HLA, MR1 is does not vary in the human population – meaning it is a hugely attractive new target for immunotherapies.

What did the researchers show?

To test the therapeutic potential of these cells in vivo, the researchers injected T-cells able to recognise MR1 into mice bearing human cancer and with a human immune system.

This showed “encouraging” cancer-clearing results which the researchers said was comparable to the now NHS-approved CAR-T therapy in a similar animal model.

The Cardiff group were further able to show that T-cells of melanoma patients modified to express this new TCR could destroy not only the patient’s own cancer cells, but also other patients’ cancer cells in the laboratory, regardless of the patient’s HLA type.

Professor Andrew Sewell, lead author on the study and an expert in T-cells from Cardiff University’s School of Medicine, said it was “highly unusual” to find a TCR with such broad cancer specificity and this raised the prospect of “universal” cancer therapy.

“We hope this new TCR may provide us with a different route to target and destroy a wide range of cancers in all individuals,” he said.

“Cancer-targeting via MR1-restricted T-cells is an exciting new frontier – it raises the prospect of a ‘one-size-fits-all’ cancer treatment; a single type of T-cell that could be capable of destroying many different types of cancers across the population.

“Previously nobody believed this could be possible.”

Experiments are under way to determine the precise molecular mechanism by which the new TCR distinguishes between healthy cells and cancer.

The researchers believe it may work by sensing changes in cellular metabolism which causes different metabolic intermediates to be presented at the cancer cell surface by MR1.

The Cardiff group hope to trial this new approach in patients towards the end of this year following further safety testing.

Professor Sewell said a vital aspect of this ongoing safety testing was to further ensure killer T-cells modified with the new TCR recognise cancer cells only.

“There are plenty of hurdles to overcome however if this testing is successful, then I would hope this new treatment could be in use in patients in a few years’ time,” he said.

Professor Oliver Ottmann, Cardiff University’s Head of Haematology, whose department delivers CAR-T therapy, said: “This new type of T-cell therapy has enormous potential to overcome current limitations of CAR-T, which has been struggling to identify suitable and safe targets for more than a few cancer types.”

Professor Awen Gallimore, of the University’s division of infection and immunity and cancer immunology lead for the Wales Cancer Research Centre, said: “If this transformative new finding holds up, it will lay the foundation for a ‘universal’ T-cell medicine, mitigating against the tremendous costs associated with the identification, generation and manufacture of personalised T-cells.

“This is truly exciting and potentially a great step forward for the accessibility of cancer immunotherapy.”

A wider selection of images is available upon request

A PDF of an independent commentary article, entitled ‘Bohemian Rhapsody’ of MR1T cells, is also available upon request

The commentary is by Swiss researchers who work in this area. They concluded the findings “convincingly suggest… a prototype of a T-cell population with great potential as a cell therapy for a wide variety of cancers” and described the finding that the TCR ignores non-cancerous cells as “gold standard for a safe cancer immunotherapy”

The study and the commentary article will be available once it is published online after the embargo here: https://www.nature.com/articles/s41590-019-0578-8

The research was funded by the Wellcome Trust, Health and Care Research Wales and Tenovus

How did the Cardiff team find the new T-cell?

The study confirmed cancer cell recognition by a T-cell clone that responded to multiple cancers in the laboratory. The T-cells discovered by this study indicate an unconventional mechanism of cancer targeting. In order to determine how these T-cells distinguished between cancerous cells and healthy cells the researchers turned to a new gene-editing approach called CRISPR. Tumour cells were infected with viruses that could use CRISPR to remove 19,000 individual genes of the human genome. This created a library of cancer cell clones with each clone lacking a gene/protein that can be easily identified. The library was then screened with the new T-cells, which killed cancer cells expressing the gene/protein of interest but not those lacking the gene/protein. The population of cancer cells that were resistant to T-cell killing were analysed for the genes they lack, thus revealing the genes/proteins involved in T-cell recognition of cancer. These were the MR1 gene and the gene for a small protein (called beta -2-microglobulin) that MR1 partners with to make it to the surface of cancer cells, and four genes thought to turn on expression of the MR1 or beta-2-microglobulin genes. T-cell recognition of multiple cancers with and without the MR1 gene and other methods were used to confirm the mechanism by which these cancers were being targeted and destroyed. Importantly, transfer of the T-cell receptor from the new T-cell to patient T-cells enabled these cells to target and destroy the patient’s own cancer cells in the laboratory thereby opening up the possibility of using this T-cell receptor as a gene therapy. A graphic of this process can be found here

Cardiff University is recognised in independent government assessments as one of Britain’s leading teaching and research universities and is a member of the Russell Group of the UK’s most research intensive universities. The 2014 Research Excellence Framework ranked the University 5th in the UK for research excellence. Among its academic staff are two Nobel Laureates, including the winner of the 2007 Nobel Prize for Medicine, Professor Sir Martin Evans. Founded by Royal Charter in 1883, today the University combines impressive modern facilities and a dynamic approach to teaching and research. The University’s breadth of expertise encompasses: the College of Arts, Humanities and Social Sciences; the College of Biomedical and Life Sciences; and the College of Physical Sciences and Engineering, along with a longstanding commitment to lifelong learning.

New study examines mortality costs of air pollution in US

Scienmag Mar 5, 2020
Princeton University's Dave MacMillan led the effort to create a nanoscale map of proteins and their nearest…