The evolutionary clade and biodiversity of green lizards of the genera Lacerta and Timon —reptiles common in the Mediterranean basin and surrounding areas of the European continent, North Africa and Asia— have never been studied in detail from the perspective of historical biogeography. Now, a paper published in the Journal of Biogeography presents a new scenario for deciphering the potential evolutionary processes that have acted —separately or together— to give rise to the biodiversity of species in this group in Mediterranean ecosystems. 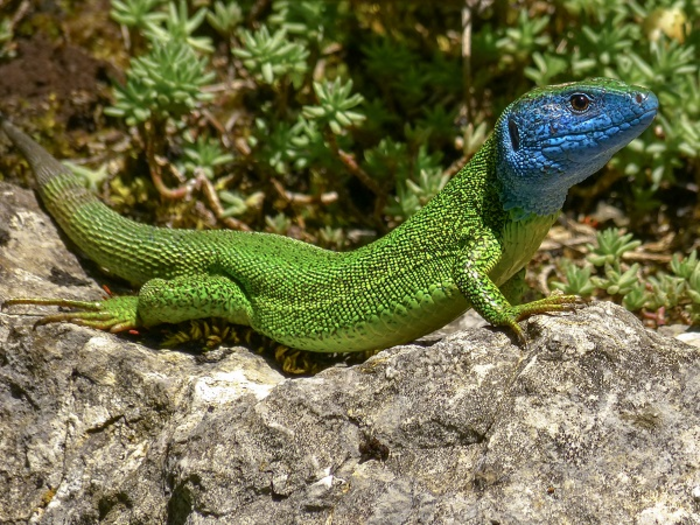 The evolutionary clade and biodiversity of green lizards of the genera Lacerta and Timon —reptiles common in the Mediterranean basin and surrounding areas of the European continent, North Africa and Asia— have never been studied in detail from the perspective of historical biogeography. Now, a paper published in the Journal of Biogeography presents a new scenario for deciphering the potential evolutionary processes that have acted —separately or together— to give rise to the biodiversity of species in this group in Mediterranean ecosystems.

The study is led by the researcher Antigoni Kaliontzopoulou, from the Faculty of Biology and the Biodiversity Research Institute (IRBio) of the University of Barcelona. Teams from the National Museum of Natural Sciences (MNCN-CSIC), the University of Vigo and the University of Porto (Portugal), among other institutions, are also participating.

The hidden history of the evolution of green lizards

Today, green lizard populations are threatened by numerous factors: the destruction and fragmentation of their natural habitat; the disappearance of traditional agricultural practices; the use of pesticides; the increase in cat populations in humanised areas; climate change, and, in addition, the fatal accidents they suffer in roads. However, although there are indications that some populations are in population decline, the International Union for Conservation of Nature (IUCN) has not yet listed these reptiles as endangered species.

According to previous studies, the evolution of the green lizard group was the result of a combination of evolution and the conservatism of ecological niches, “but the relative role of geological history and niche dynamics had not yet been tested”, says Antigoni Kaliontzopoulou, a member of the Department of Evolutionary Biology, Ecology and Environmental Sciences of the UB.

The new study combines cutting-edge analytical tools to study the evolution of phenotypes and the biogeographic history of green lizard phylogeny, and to infer their relative contribution to species diversification. The team links high-temporal resolution biogeographic models, which integrate for the first time comprehensive data on changes in terrestrial ecosystem configuration and connectivity in the Mediterranean to assess the importance of dispersal and vicariance in determining historical range dynamics.

Specifically, the team implemented phenotypic modelling of phylogenies to identify changes in the evolutionary rate of morphological diversity and the climatic niches occupied. This information was then combined with a series of trait-dependent diversification analyses to establish how the diversification of the lineage group had been shaped.

“Such inferences usually focus on a single aspect of diversification: either cladogenesis, geographic dynamics, climatic niche properties or phenotypic trait evolution”, Kaliontzopoulou adds. “Our study is innovative in bringing together evidence that has allowed us to contrast hypotheses about different potential evolutionary processes that might act separately or in combination to shape species diversity in the Mediterranean hotspot”.

The study provides evidence that, when all existing diversity is considered, the biogeographic history of this emblematic group of Mediterranean lizards is the result of a combination of range expansions associated with dispersal events —probably dependent on geographic distance— and rapid evolution of ecological niche characteristics within a specific clade.

“As a whole, the group has diversified in a relatively steady rhythm, without changes in lineage diversification rates associated to major climatic events of the Mediterranean region, and without an apparent link to functional morphological or climatic niche divergence”, says Kaliontzopolou. “Rather, the colonization of previously empty areas rather promoted the diversification of new lineages through their isolation from their relatives and was facilitated, in some groups, by an increased tolerance to lower temperatures”.

A recurring pattern in Mediterranean ecosystems

All indications are that the evolutionary history of green lizards was dominated by biogeographical episodes of long-distance dispersal into previously empty areas, modulated by the allopatric divergence process. These processes are also accompanied by the mechanism of ecological niche conservatism, occasionally interrupted by events of local evolution and adaptation of climatic niches, but with no signs of connection to morphological evolution.

“Our study provides evidence of a combined role of higher-scale niche conservatism and rapid niche evolution underlying the evolutionary history of this lizard clade around the Mediterranean”, says Kaliontzopolou. “

This seems to be established as a recurrent pattern in Mediterranean ecosystems, with several examples accumulating to support the idea that while niche conservatism is a common mechanism favoring the buildup of diversity, transition away from hotspots is related to events of accelerated niche evolution. Furthermore, diversification in functional morphology does not emerge as a key component of the diversification process of green lizards”.

This contrasts with other biogeographic areas —perhaps with more stable climatic conditions such as the tropics— where structural niche partitioning is an important process of lineage diversification.

“In Mediterranean ecosystems, instead, it seems that lineage diversification is rather driven by geological events and through allopatric divergence after the colonization of new environments. In such environments, morphological divergence seems to occur in much more recent times and within already diversified groups, possibly as a response to ecological-scale events or processes such as sexual selection, not investigated in our study”, concludes the researcher.